All Dressed In White 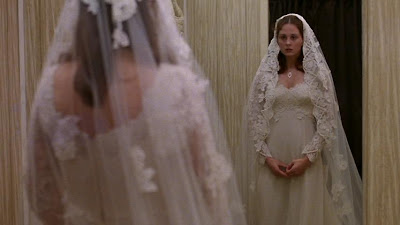 For a sub-genre that was often labeled as "anti-women," the slasher films of the late '70s and early '80s showcased many exceptional horror heroines. One of the best was He Knows You're Alone's Amy Jensen, as played by Caitlin O'Heaney. Written by Scott Parker and directed by Armand Mastroianni, He Knows You're Alone tells the tale of Amy, a good Catholic girl, as she nervously prepares to walk down the aisle with her boyfriend Phil (James Carroll). When we first meet Amy and Phil, Amy is saying her goodbyes as Phil is leaving on a weekend getaway with his buddies. That leaves Amy in the company of her girlfriends Nancy (Elizabeth Kemp) and Joyce (Patsy Pease). 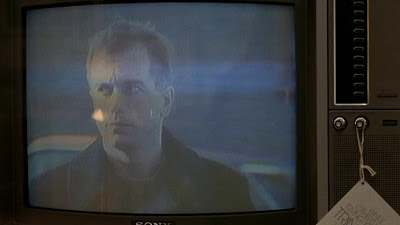 What Amy and her friends don't know is that Amy has gained the attention of Ray Carlton (Tom Rolfing), a serial killer that preys on brides-to-be, killing them before they reach the altar. We never learn much about Ray as he methodically stalks Amy and all those around her, but we do know that the Grim Ray-per previously murdered the fiancee of police detective Len Gamble (Lewis Arlt), and that Gamble is obsessed with taking down this maniac before he can strike again. 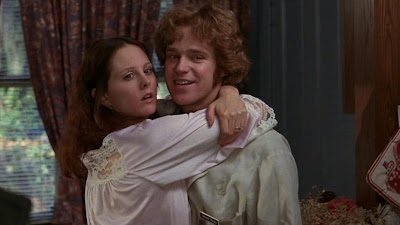 Amy's doubts about her future with Phil are amplified by the presence of her ex-boyfriend Marvin (Don Scardino, known also from 1976's Squirm). A morgue worker with a goofy, good-natured sense of humor, Marvin is still smitten with Amy and is eager to talk her out of marrying Phil. Scardino and O'Heaney have a natural chemistry and, save for the dourest roles like Ray and Det. Gamble, the film's performers all have an ease and amiability about them. 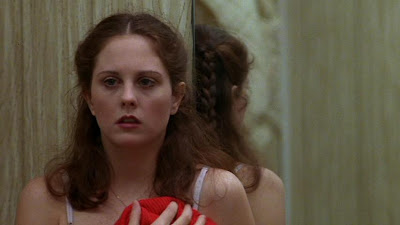 As Amy, O'Heaney is every bit as personable as famous Final Girls such as Adrienne King, Amy Steel, or Jamie Lee Curtis but yet it seems to me that she's something of a forgotten horror heroine. 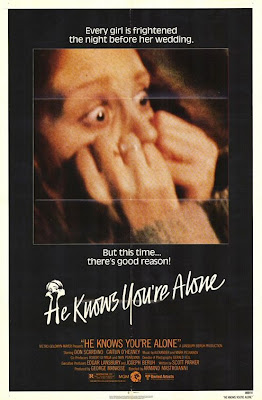 It's ironic that O'Heaney should be so seldom remembered as her face was right on He Knows You're Alone's posters. No other slasher heroine, not even Jamie Lee Curtis, was featured so prominently in an ad campaign. This is not so surprising as these actresses were not movie stars but even after the success of Halloween made Curtis a bona fide Scream Queen, Avco/Embassy didn't use her face on the one-sheets for Prom Night. Instead, it was a close-up of the film's ski-masked killer holding a shard of glass. Similarly, Terror Train's poster used the image of the killer in a Groucho Marx mask and conductor cap rather than Curtis (during her horror career, Curtis was only featured on the poster for the non-slasher The Fog).

But yet it wasn't Rolfing glowering at us from the posters for He Knows You're Alone, instead it was O'Heaney in a moment of wide-eyed terror. Right out of the gate, she got a star treatment that no other Final Girl received. 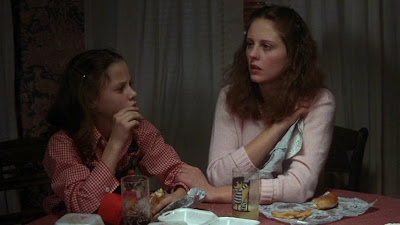 After He Knows You're Alone, O'Heaney went on to have one of the better careers of any Final Girl, landing a starring role in the short-lived but well-remembered 1982 ABC adventure series Tales of the Gold Monkey, where she continued to do her share of screaming. 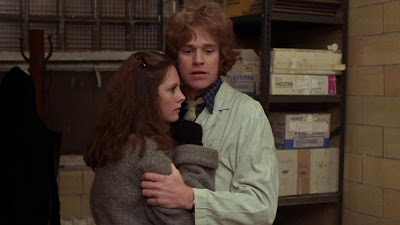