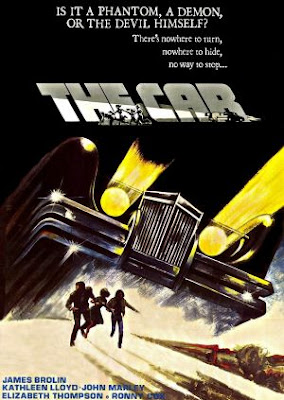 When most horror fans think of the '70s, they immediately think of The Exorcist or The Texas Chain Saw Massacre. While I think of those classics too, being as young as I was at the time, I wasn't all that aware of those films during the '70s themselves. Back in the day, '70s horror for me was symbolized by PG-fare like Empire of the Ants, not The Hills Have Eyes.

If you had asked me then what my favorite horror movies were, 1977's The Car would have ranked right near the top of my list. It's the kind of movie I surely would have (foolishly) scoffed at as an adult - and probably even as a teenager - but as a young kid I was entranced by it. Chronicling the small Utah town of Santa Ynez's death duel with an ominous, and apparently hell-sent, black Lincoln Continental whose driver is never seen, The Car is simple and direct and does not sell its title character short. If you want a movie about a killer car doing killer car things, The Car is not going to disappoint you. 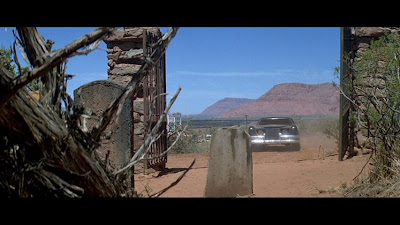 Written by Michael Butler, Dennis Shryack, and Lane Slate and directed by Elliot Silverstein (Cat Ballou), The Car has been perennially pissed on since its debut but Gen-Xers have always held it in high esteem as one of our generation's great guilty pleasures. Adult critics and genre fans saw only a low-brow rip-off of Duel crossed with The Exorcist (or even, "Jaws on wheels"). Kids saw a movie that was kick-ass from start to finish. We're simple that way. 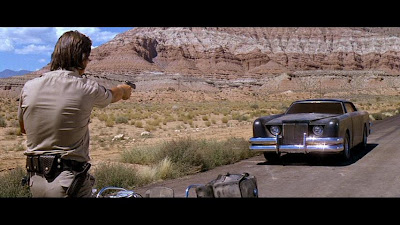 For years I went along with the notion that The Car only seemed good to me because I saw it when I was so young and impressionable. Seeing it now, though, I've gotta say "screw that" - it's a flat-out cool movie. Sure the dialogue is occasionally hokey but the cast (including James Brolin, Ronny Cox, and R.G. Armstrong) never winks at the camera or condescends to the material - to a one, they all try to keep their reactions true to their situation. And the action is choice. When The Car does a barrel-roll in order to wipe out two approaching police cars at once, it's still spectacular.

Abetted by cinematographer Gerald Hirschfeld (Young Frankenstein), Silverstein takes great advantage of the scenic, panoramic locations (it was an inspired choice, by the way, to have this film take place in a dry Southwest town so the Car can kick up dust clouds everywhere it goes). Many scenes benefit from the sense that with such wide-open vistas, with nothing but road or flat desert, there's no safe place for The Car's victims to flee to. It's a strategy that really pays off when one victim to-be does get inside their house but to our shock we see that it might as well have been made of matchsticks. 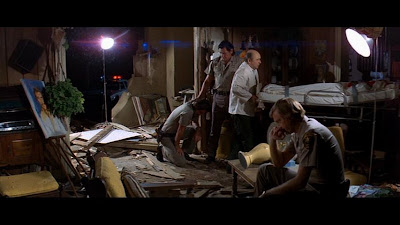 The Car was pimped out to be a horror superstar, ready to roll into sequels (the end credits show us that The Car has survived the fiery finale and is now cruising the highway alongside an unspecified city) but apparently no one cared about that back in 1977 as it played to poor box office (the fact that Star Wars opened just twelve days after The Car may have caused the movie to be overlooked). But man, The Car makes the shark in Jaws look about as lethal as a goldfish. From its tank-like design to the distinctive blare of its horn to the sizable body count that it racks up, The Car was custom-made to be a horror heavyweight. 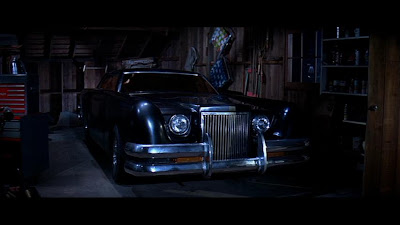 Thanks to its opening quote by Church of Satan leader Anton LaVey, The Car has always been seen as a film that was riding on the dying fumes of the post-Exorcist wave of horror but I also think it deserves some credit for anticipating the slasher craze yet to come. Some might say the fact that The Car is, well, a car disqualifies this film from being categorized as a slasher pic but yet while films like Psycho, Texas Chain Saw, and Black Christmas are more obvious antecedents of the slasher sub-genre, as a body count movie featuring creative kills, with many scenes of the killer stalking its victims - complete with POV shots as we witness events through the hellish tint of The Car's windshield - The Car resembles assembly line slasher moviemaking as we came to know it. More importantly, The Car introduced what would become a key component of slasher cinema - the notion of the supernatural-based, invincible killer.

Like popular slasher icons to come such as Jason, Freddy and Michael Myers, The Car is impossible to kill and displays an uncanny talent for showing up in impossible places - as when it suddenly appears parked in Brolin's garage. In talking about Death-Proof, his contribution to Grindhouse (2007), Quentin Tarantino claimed that he wanted to do his version of a slasher movie but with a car as the weapon but The Car got there first. The killer car is a familiar horror staple, appearing in films like The Hearse and Christine. But no other movie in this sub-genre has ever been as purely driven as The Car. I can't say that it ranks high alongside the '70s true masterpieces (the '70s was an incredible decade for horror, after all) but my nine-year-old self would be happy to know that, unlike many other films from my childhood, I don't look at The Car as a camp classic at all but as a damn fine ride. 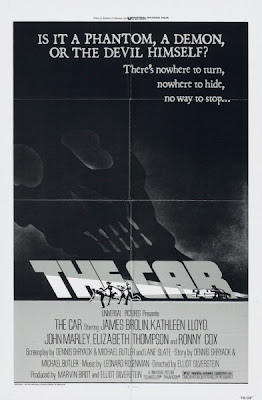 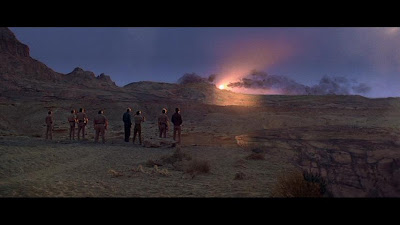 It holds up just fine, Will! Over thirty years later, it's still good stuff.

I watched this again early this year and did enjoy it. So good still. And when you compare it to the dreck we get delivered these days, it is a freaking masterpiece!

That's true, Wings. The Car might've been seen as sub-par way back when but I only wish that's what a "bad" horror movie looked like now!

One can see THE CAR as the granddad to the current RUBBER...

Great point, L. Ron! That reminds me - I've got to catch up with that movie!