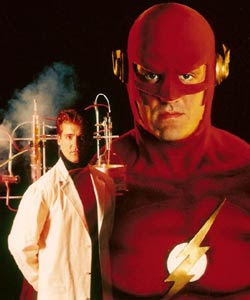 In light of the sad letdown of Green Lantern, I thought I'd look back on a much more successful adaptation of a DC Comics mainstay - the live-action TV series based on the exploits of The Fastest Man Alive, aka The Flash. Of course, calling The Flash "successful" refers solely to its artistic merits as the show died a quick death after one season following its debut on CBS in 1990. The Flash was an expensive venture for CBS, but a seemingly good bet in the wake of Tim Burton's Batman (1989). Ironically, though, The Flash just didn't find its audience fast enough. 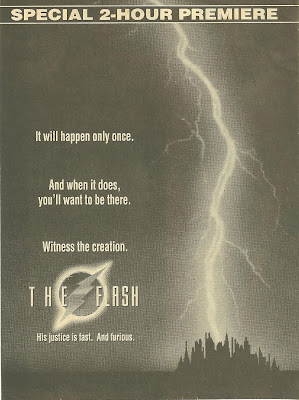 Starring John Wesley Shipp as forensic scientist for Central City PD, Barry Allen, The Flash stuck to the Scarlet Speedster's Silver Age roots. Even though the character of Barry Allen had been dead in the comics for several years since the multi-verse altering events of the DC Comics miniseries Crisis on Infinite Earths and the mantle of The Flash had been taken up by Barry's young nephew, Wally West, it was Barry that took center stage in the TV show. Likely this decision was based largely on the fact that Barry's job on the police force was an ideal facilitator for story opportunities. As in the comics, a bolt of lightning strikes Barry as he works with chemicals inside his lab, with the resulting explosion giving him the miraculous gift of super-speed.

In an effort to cope with his new found powers, Barry turns to S.T.A.R. Labs scientist Tina McGee (Amanda Pays) who outfits Barry with a suit initially conceived for deep sea diving that serves to resist the incredible friction that occurs when Barry runs at top speeds. Looking for revenge after the death of his cop brother (Tim Thomerson) at the hands of gang members, Barry goes into action and swiftly develops a taste for crime fighting. 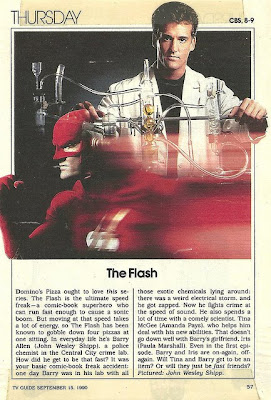 Developed by Danny Bilson and Paul De Meo (the duo who also scripted 1991's The Rocketeer), The Flash was clearly indebted to Burton's Batman. The noir-ish design of The Flash's stomping grounds of Central City owed its inspiration to Anton Furst's production design on Batman, the molded Flash suit with its sculpted musculature aped the style of the Batman suit that Michael Keaton had worn (it was designed by the same creator, Robert Short), and even Batman composer Danny Elfman contributed The Flash's theme music (with Shirley Walker, who would go on to handle the musical chores on Batman: The Animated Series, handling the regular score). But despite owing so much creatively to Burton's film, The Flash had its own charm and personality.

Barry Allen, like many of DC Comics' heroes, was never a particularly interesting character but Shipp made for an ingratiating lead. As his Girl Friday, Amanda Pays was an attractive and believably brainy presence and the ongoing romantic tension between Tina and Barry simmered nicely on a low burner throughout the season - even as Barry found himself getting involved with a number of other women, such as Joyce Hyser as tough female P.I. Megan Lockhart. The Flash also had a winning supporting cast, including Alex Desert as Barry's dreadlocked lab mate, Julio Mendez, and Biff Manard and Vito D'Ambrosio as frequently bickering street cops Murphy and Bellows.

Famous - and soon-to-be-famous - guest stars abounded, including Jeffrey Combs, Ken Foree, Dick Miller, Richard Belzer, David Cassidy, and Angela Bassett. Perhaps the most memorable guest star, though, was Mark Hamill as The Trickster. The most garish foe the TV Flash fought, Hamill's performance owed a debt to Frank Gorshin's manic, giggling Riddler and he gave The Flash a run for his money not once but twice, being introduced midway through the season and then encoring in the season finale "The Trial of the Trickster." 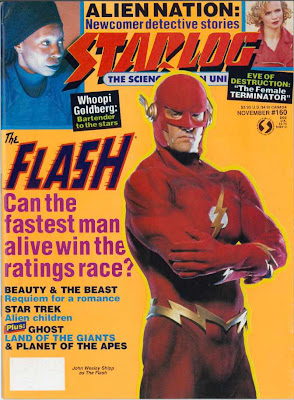 For a show that CBS spent so much money on, the network not only did surprisingly little to promote it but, with frequent schedule changes, seemed out to make it impossible for any one to find. During its year-long run, The Flash suffered in competition against the likes of The Cosby Show and The Simpsons and saw several of its episodes preempted by coverage of the Gulf War. By the end of its first season, it was disappointing - if not especially shocking - to learn that CBS felt The Flash had run its course. On the upside, at least CBS footed the bill for a full season and on top of that the show was really friggin' good.

Ironically, in interviews back then the show's producers and stars touted the fact that this was a darker, more adult show than some might expect from a series based on a gaudy superhero. But what passed for mildly dark superheroics in 1990 - basically anything that didn't reflect the camp sensibility of the '60s Batman series fit that bill - simply looks like a sturdy action show now. The show had heart, a love of pulp adventure (two of the series' best episodes - "Ghost in the Machine" and "Deadly Nightshade" - featured the character of Nightshade, a hero in the mold of The Green Hornet and the Golden Age version of The Sandman, who predated The Flash as Central City's masked protector), and the best production values that CBS could afford.

Although The Flash didn't find an audience in its day, it has in the years since as an ever-growing number of fans have continued to acclaim it, giving the show and its creators a delayed victory. In that sense, The Flash was perhaps more tortoise than hare but sometimes the race isn't won by speed but by perseverance.

I don't know why I didn't watch this show more when it was on. Maybe it's time to put this on the Netflix queue.

Go for it, Bob! It's a fun show with hardly a single real lemon episode in the bunch.

It's a terrific series. I agree. Great choice Jeff. I'm with you on Green Lantern. How unfortunate given how terrific the comic book has been for decades.

In fact, now that I think about it, I used to dream of a live action Green Lantern production. I never imagined it like this with Ryan Reynolds. Horrible choice. A true disaster or epic, bad CGI proportions.

Ryan Reynolds is overrated. Why did Green Lantern have to be humorous. I was disappointed in Martin Campbell too. I expect better from him. I actually enjoyed Edge Of Darkness quite a lot.

I enjoyed this when it originally ran and was disappointed it didn't come back. You are right, it was well done and should have been a template for more forays into TV land for other DC heroes, at the time. Sadly, that was not the case.

Wow, I haven't thought about this show in ages! I remember when it debuted and remarking how much the dark look of the show owed to Burton's BATMAN film. It really is a shame that the network let this one die on the vine as it were. In today's resurgence of superheroes a show like this might actually have a fighting chance.

Always liked Amanda Pays and developed a crush on her thanks to MAX HEADROOM. I always wondered what happened to her. She had very nice chemistry with Shipp on the show.

I loved this show, taped every episode when they aired and picked up the DVD set when it was released, it was a fun show.

I remember watching this show with friends and all of us really liking it. My girlfriend was into cars and she all the interesting vehicles they dropped into the street scenes.
Somehow though we didn't see many episodes though... probably because of what you mention with its schedule being shifted around.

Definitely going to have to track it down for a viewing.

SFF, GL was a rare disappointment from Martin Campbell whose Bond and Zorro films I really dug. I don't see anyone else taking another crack at a GL movie anytime soon so it's a shame all around.

Joe, back when The Flash was on, I briefly hoped that either Green Lantern or Green Arrow might follow The Flash to the small screen but sadly it didn't happen.

J.D., I also had a crush on Amanda Pays thanks to her role in 1989's Leviathan. She went on to marry L.A. Law's Corbin Bersen and apparently left acting to be a full time mom. The whole Bersen clan appeared on a celebrity Family Feud some time back and Amanda looked just as pretty as she did twenty years ago.

Chunky, it was a happy day for me when The Flash finally became available on DVD as it meant I could finally retire my VHS dubs.

Knob, if you revisit The Flash I think you'll be glad you did.