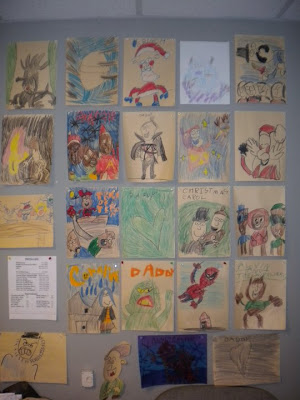 As some followers of this blogspot may be aware, I was unemployed for some time recently - a situation I was becoming increasingly distressed about, to the point where I found it difficult to focus on much more than the black abyss of my own joblessness. The good news is that I started working at a local television station last week. It's a job that I really, really wanted and that I'm extremely grateful to have gotten.

But along with my great enthusiasm for being back at work is a sobering sense of reflection on my too-long tenure on unemployment. I worked for National Amusements as a theater manager for ten years and when they sold the majority of their assets to a rival chain, I expected some new policies and procedures would need to be implemented. As it turned out, there was but I wouldn't be staying to implement them.

Deciding to give my notice rather than accept the new owner's job offer was a difficult decision and I spent most of the time in the title of this post wondering whether or not I had chosen wisely. On the one hand, to stay would not have been beneficial to me or my family. In fact, it would have been almost a sure guarantee to ruin.

But, as I often thought as I sent out one resume after another to no avail, at least it would have been a job. A job I could no longer make a living off of or receive benefits from, true, but at least it was a paycheck - something to work with. I frequently agonized as to whether I had tragically erred in making a young man's decision to leave to look for something better rather than make a decision more suited to my age and play the safer hand.

When I first left, I felt confident that I would find new work in a relatively short amount of time and I held on to that optimism for the first six months or so. Even though nothing was panning out, I didn't doubt that a break would come. But by the beginning of this year I really begin to worry about whether I would ever be able to break back into the working world.

They say that many people on long term unemployment get to a point where they just give up and I can definitely sympathize with that. News reports about how many companies refuse to hire people who aren't already working and about how the longer a person is unemployed, the more unemployable they become sure don't help.

At the top of this post is a picture of my old desk area at Enfield Cinemas, wallpapered with drawings from my son Owen. I look at that pic now and it seems like it came from another lifetime. I had no idea when I took that shot on my last day of work in April of 2010 what kind of journey I had ahead of me. Now that I'm working again, some might say that I just wasn't meant to get any of those other jobs and that, in the end, things worked out for the best.

I agree on that - but being unemployed in today's America was a long and humbling experience that I'll never forget.
Posted by Jeff Allard at 2:36 AM

Being unemployed myself, for different reasons, I can relate. But chalk it up to experience learned and earned and move forward. Kudos on the new job and I hope it is all good roads from here on out!

Me too, CJ - thanks! Good luck to you on your job search!

Congrats on the new gig, Jeff. Sounds like your patience and perseverance has paid off.

Really happy to see something finally came through for you. Hopefully now you'll be in a better mood and blog more.

Congrats on the job. Being out of work for a while is tough. I was out for 18 months after 2001 and getting back into the flow was rough. I hope this means more blog posts.

Also, get on Twitter and spread the word on your great blog. I think you'd dig it.

FF, Bob, CB - thanks for the congrats! As for an increase in blog posts, we'll see how it goes.

I'm so thrilled you found a great job, Jeff! And now you get to roll hard with Sly Sy and talk about horror movies! Or not!

Probably "or not." Maybe after I've been there awhile I'll be more likely to bump into the on-air talent but for now I'm pretty isolated from all that. Maybe when I finally do see film critic and local legend Sy Becker he'll remember interviewing me as a man on the street about some political issue (I forget what it was) and him commenting on the Warriors T-shirt I was wearing. Can you dig it?

Ah, it makes me happy to hear you're employed again... and hopefully less tormented.
I've been out of work for a while myself, though luckily I don't have dependents to worry about. Either way It sucks and gnaws at your soul.

Hopefully all sorts of good stuff comes your way from here on out.

Thanks Knob - here's to good luck in your job search! I hope you find something soon!