The Bishop of Battle 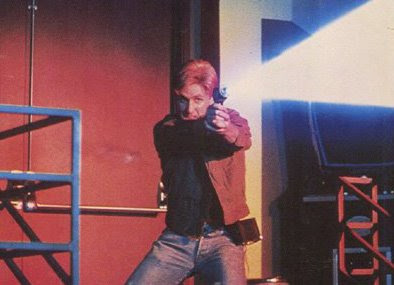 Some of my favorite movie going memories from the early '80s involve not just the movies themselves but stopping off post-show at the Dream Machine arcade stationed opposite the entrance to the Sack Palace Cinemas in the Eastfield Mall. I saw my movies on Saturdays back then and on those afternoons, Dream Machine was always loud and always packed. But although I enjoyed playing the likes of Galaga and Centipede, I never pursued the video game experience for its own sake. I've never owned a home system and as arcades themselves have become obsolete (no malls in my area have any arcades now), my sole contact with the world of video games has gone with them.
With no actual arcades left to return to, when I'm feeling nostalgic for my days as a quarter jockey, I turn to "The Bishop of Battle" segment of the 1983 anthology film Nightmares.
Along with Nightmares' other three segments ("Terror in Topango", "The Benediction" and "Night of the Rat"), "The Bishop of Battle" was originally produced for TV (reportedly intended for Darkroom but I don't recall ever seeing this rumor confirmed) but when these shorts (all directed by Joseph Sargent) were deemed too intense to air, Universal resourcefully packaged them together as a feature film.
Back then, I was easily wowed by the release of any new horror movie so the fact that despite being a regular FANGORIA reader I had never heard anything about Nightmares prior to the first commercial I saw advertising its release didn't seem like a cause for concern. Hell, even the ads said "Each summer one film opens that you've never heard of..." And it was totally true - I had never heard of Nightmares!
But even though Nightmares didn't quite end up being "this year's sleeper", as its posters promised, its "The Bishop of Battle" segment was an immediate favorite for me. Emilio Estevez starred as video game wiz J.J. Cooney, who we first meet along with his buddy Zock (Billy Jayne) hustling players for cash. J.J.'s the unchallenged superstar of the arcade but in his quest to make it to level 13 of the game Bishop of Battle (the Bishop is voiced by actor James Tolkan, still most famous as Marty McFly's ball-busting principal in Back to the Future), J.J.'s grades are suffering, he's brushing off cool chicks (Moon Unit Zappa), and alienating a concerned Zock.
When the manager of his local arcade has the temerity to clear the place at closing time and force the bitter J.J. to walk away from the Bishop of Battle, J.J. takes it upon himself to break into the arcade in the middle of the night for some uninterrupted playtime. Luckily for J.J., his arcade is apparently sans any burglar alarm as he forces the door open and no cops show up to investigate. Unluckily for J.J., he triumphantly breaches level 13 only to discover that the last level of the game is winner-take-all. The climax of "The Bishop of Battle" sees the arcade turned into a war zone as elements from the Bishop of Battle game emerge into the real world to show J.J. what a battle is really like.
And while J.J.'s skills fail against Bishop's computerized mind and otherworldly weaponry, from the standpoint of 2008, we know that eventually the Bishop met an enemy that even he couldn't beat: the apathy of teens who moved on to other games to play. Poor Bishop - he's so 1983.
Posted by Jeff Allard at 4:27 AM

Email ThisBlogThis!Share to TwitterShare to FacebookShare to Pinterest
Labels: Emilio Estevez, Nightmares, The Bishop of Battle

Great article! I've always loved this segment of the film, and two things brought me to comment. One, I was at one of the sole remaining arcades in the US, Funspot in New Hampshire, and they had Pleiades in working condition - which will always make me think of the Bishop. Two, I've been completing my Fangoria collection, and an old issue that was talking about Joseph Sargent and his involvement with the ABC show Darkroom mentioned an upcoming segment called the Bishop of Battle.
It is also confirmed, thanks to the magic of the Internet, in an actual book - Television Series and Specials Scripts, 1946-1992. If you throw Bishop of Battle into Google Books, the result will be immediate.

Thanks John - I'm always glad to hear from a fellow Bishop of Battle fan! And yeah, I do know about Darkroom's connection with Nightmares. Darkroom was a childhood favorite of mine so I'm not surprised that I love Nightmares, too!