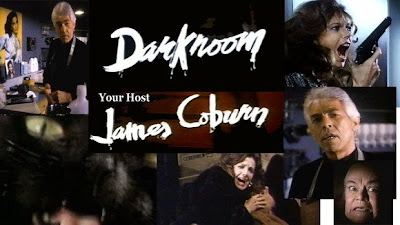 When Fear Itself, TV's latest crack at the anthology format, debuts on NBC this week most fans and critics will likely be looking to compare it to standard bearers like the original Twilight Zone and Outer Limits. But I'll be setting a much lower bar for it - I'm just hoping that it compares well to the short-lived Darkroom, which ran on ABC for a scant total of seven episodes from November 27, 1981 to January 15, 1982.
Darkroom didn't earn any acclaim during its fleeting few weeks of existence but it was a huge show for me. I was in seventh grade at the time and thanks to the syndicated runs of TZ, Outer Limits, Alfred Hitchcock Presents and Night Gallery (and even the UK import Tales of the Unexpected) I was an avid anthology junkie. But Darkroom would be the first that I'd be able to watch first run.
Hosted by James Coburn in the role of, um, some dude in a darkroom, Darkroom aired during the height of the early '80s horror boom (the reason it was on the air in the first place) while explicit new R-rated horror films were debuting in theaters every week (also the likely reason that the timid Darkroom tanked). I was twelve at the time and my parents didn't allow me to see horror films in the theater and we didn't have cable or a VCR yet so whatever horror movies I was able to watch on TV were never new, everything was always a second hand experience for me.
So while Darkroom was useless to the older, horror-hardened crowd who could see Happy Birthday to Me on a Friday night rather than watching the neutered network version of horror on TV, for me each episode of Darkroom was a bonafide event. It didn't occur to me that it was a lame show that no one else would care about.
I should also mention that I was mightily impressed by the violent Robert Stack cop show Strike Force that ran at 10pm after Darkroom on ABC (and which at nineteen episodes barely outlasted Darkroom's cancellation). I think that prior to the age when I was old enough to drink, the few weeks that those two shows aired back to back were the best Friday nights I ever spent.
But while I couldn't recount much of Strike Force today, almost thirty years since their broadcast, I still vividly remember almost every Darkroom episode. The one most fans point to as being the series' finest hour is "Siege of 31 August", which starred a pre-Robocop Ronny Cox as a family man and troubled Vietnam vet whose past and present collide when his son's toy soldiers begin to come to life.
This maturely meant episode was definitely the story where the show's producers pulled out all the stops - staging an impressive showdown in a barn between Cox and the tenacious toy soldiers in a climax that mixes miniature FX, rear projection, blue screen work, and models and live actors in forced perspective. But I also loved the series' cautionary premiere episode "Closed Circuit", which starred Robert Webber as a TV newsman who finds himself being replaced by his own video image and the nasty "Catnip", penned by Robert Bloch, which pitted a neighborhood thug against a vengeful witch and her black cat.
In the course of its short run, Darkroom boasted a number of talented contributors. Author Robert Bloch and Hammer screenwriter Brian Clemens were among the show's scribes and director Rick Rosenthal (Halloween II) and Paul Lynch (Prom Night) helmed the vast majority of the series' installments with Curtis Harrington (Night Tide) directing an episode scripted by Clemens ("A Quiet Funeral"). And in front of the camera, stars like Helen Hunt, R.G. Armstrong, Quinn Cummings, Claude Akins, Esther Rolle, Billy Crystal, and David Carradine could be seen.
The show may have failed in the eyes of seasoned genre fans who regarded it as nothing but a facsimile of true horror, but it made a lasting impression on this viewer. When you're young, sometimes a facsimile can be just as important as the Real Thing.
Posted by Jeff Allard at 6:48 AM

Email ThisBlogThis!Share to TwitterShare to FacebookShare to Pinterest
Labels: Darkroom

When anthology shows are brought up, DARKROOM usually gets left out.

If you look around, some torrents may be found... my tape of 'Closed Circuit' has almost given up the ghost. I may go looking.

Doubt that this will see release - it's taken forever to get NIGHT GALLERY out of the vaults... if they didn't burn up in the Univeral fire recently.

Yeah, if something with as much name value as Night Gallery has taken this long to get a proper release (Season Two is reportedly coming later this year - finally!) then what hope does the penny-ante likes of Darkroom have?

Then again, I'm often surprised by the shows that do get a release so who knows?

Dark Room was very good.
There was one I remember which involved a Crystal radio-- the Nazis ended up winning WWII. The Ronny Cox one was good too.
They were pretty vivid like the old Outer Limits and Twilight Zone which can still keep me late at night.