Make A Man Out Of The Hulk! 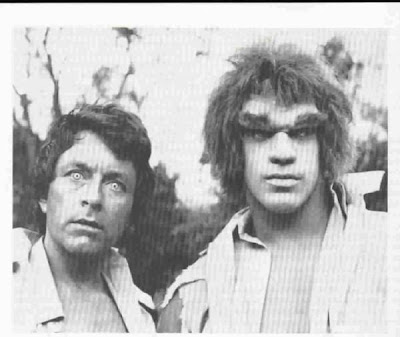 I totally agree... this is exactly what I was thinking during the last two Hulk movies.
I wonder though if it's partly due to my age... if I was a kid would I turn up my nose at a 'real' Hulk who didn't seem quite as... super?
I know I'd always prefer Godzilla be played by a man in a rubber suit... but if I hadn't grown up with that would I care?

It's hard for me to say whether it's just my age making me think that the Hulk has to be a real guy but regardless, I think that's the way they have to go with it. If nothing else, you'd probably have the same amount of people showing up to see the movie but the production costs would be so much less.

And I really do think that a cool Hulk could be had with a real actor. If you gave whatever actor was chosen some top-notch prosthetic make-up and shot their scenes with the right lighting and camera angles, you'd be set. I wish that some enterprising FX talent or filmmakers would film a test reel with a real actor playing the Hulk just to show Marvel that it could be done.

Sure, having a real actor playing the Hulk means you can't have him do some of the more outrageous bits from the comic but I think only a very small percentage of the population would give a rat's ass.

Oh well, here's hoping that they'll decide to give this approach a shot one of these days.

Hey there!
I was working on my own blog and came across yours! Here's my take on The Incredible Hulk!