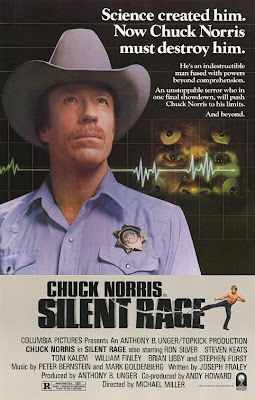 Michael Myers might be a horror icon and all but don't you think he made his reputation the easy way? I mean, seriously - when you're an unstoppable killer, isn't it kind of cheap to make a name for yourself by taking on teenage girls and an old man? What would happen if a punk like Mike Myers had to go up against a real man for a change? How indestructible would he be against a world karate champion, for instance? Well, the producers of Silent Rage (1982) clearly had that same thought and delivered a film that was the closest horror fans ever got to seeing The Night HE Got His Ass Kicked.

In a bid to cash in on the then-thriving slasher craze, and also in a bid to give action icon Chuck Norris a believable challenge, Silent Rage pitted Chuck - as a determined small town Sheriff - against a human killing machine so relentless that if Chuck fails to bring him down, a nuclear air strike may be in order. Of course, nature alone could never create a being powerful enough to go up against Chuck Norris so Silent Rage's killer is the Godless creation of scientists who commit the foolhardy mistake of reviving a homicidal killer hovering on Death's Door.

And thanks to genetic engineering, this man can now withstand almost any form of physical harm. Of course no one knows more about inflicting physical harm than Chuck Norris so this super sociopath still has plenty to worry about.

Brian Libby plays John Kirby, a four-star whack job who goes on a motiveless murder spree as Silent Rage opens. He wakes up in the boarding house where he's been staying and receives a concerned call from his psychiatrist . We see Kirby subsequently struggle to talk while fumbling in vain for his medication, spilling his pills across the floor. We sense that he may be losing it - especially when he tells his doctor "I'm losing it, Doc! I'm looosing it!" He then does 'lose it' and chases his landlady through the house with an axe in what must be considered one of the Best Opening Scenes Ever.

A mailman on his route hears the landlady hysterically screeching for help (a mailman on his route in India could've heard her just as easily) and soon the local law rolls up, led by Chuck as Sheriff Stevens. Back up is available (well, kind of - the newest addition to the force is Stephen Furst, aka Animal House's chubby "Flounder") but Chuck goes in alone and shows Kirby why it doesn't pay to be an axe-murderer in his town. Unfortunately while being taken into custody, Kirby gets loose and the group of law enforcers on the scene have no choice but to gun him down.

Clinging to life, Kirby is taken to the medical facility where his psychiatrist (played by Ron Silver) works and where, it just so happens, groundbreaking genetic research is being done (!). Against Silver's ethical protests, Kirby is revived post-death (by Steven Keats and genre regular William Finley). Once Kirby gets his feet on the ground, his first house call is to his psychiatrist.

The home invasion that follows delivers some choice stalk and slash moments (there's a perfectly timed head-slam to the wall, for instance) and Libby's malevolent performance, spiked by quirky behavioral tics (like the way he'll often enter a room crouched rather than standing), makes Kirby stand out as one of the more formidable movie maniacs of the '80s. He's such a force to be reckoned with that only Chuck's best roundhouse kicks can end Kirby's rampage.

But before he and Kirby have their showdown, Chuck spends most of Silent Rage reviving an old romance between himself and researcher Alison Halman (Toni Kalem), a woman who he hasn't seen in six years but who now works at the same institute where Kirby's body was taken.

When they first meet in the film, Chuck bumps into Kalem in the halls of the institute and she promptly slaps him across the face for running out on her. Two scenes after that, they're in bed together. The next time they meet, it's right back in the sack for a cringe-inducing love montage that includes gratuitous hammock swinging. And in case it's never been said before, Chuck Norris should not swing in any hammocks. Ever.

Silent Rage may not be particularly great but it is a lot of fun - especially for aficionados of '80s cheese - and it delivered bigger and better slasher movie action than any of the Halloween and Friday the 13th rip-offs at that time, which were generally all structured as 'whodunnits' (and were also too low budget to incorporate the kind of stunt work seen in Silent Rage). And as routine as Silent Rage might seem and as much as this film is chasing Halloween's success, Kirby is a precursor as to how invincible Michael and Jason would later come to be depicted in their own series and Silent Rage foreshadowed the action-heavy approach the sub-genre would adopt as the '80s went on (think of the scene in Jason Lives where Jason crashes a motor home, for instance, or in Halloween 4 where Michael throws victims out of the back of a speeding pick-up).

At the time of Silent Rage, Michael had just been 'killed' in Halloween II and Jason was still the 'hillbilly' version seen in Friday the 13th Part 2 (both films from 1981). Back then, both these icons weren't quite the super-slayers they'd later become - they were merely just hard to kill. But yet in Silent Rage, Kirby survived blunt trauma as only Chuck Norris can deliver it and returned it in kind. As the U.S. posters said, he will "...push Chuck Norris to his limits. And beyond."

As a reminder of an exploitation era when slasher films and Chuck Norris were two of the best reasons to go to the movies, Silent Rage holds up as a satisfying genre crossover.

Click over to my pals at Kindertrauma for their awesome appreciation of Silent Rage, along with some other choice '80s action films that cross the line into full-blown horror.
Posted by Jeff Allard at 11:30 PM

Man, I can't believe I've never seen this one. Sounds like I need to update my Netflix queue.

I have never before had the itching desire to sit and watch any Chuck Norris vehicle longer than an episode of Walker: Texas Ranger, but I may have to actually search this film out, rather than simply coming across it on late night TV, too weakened from insomnia to contine pushing the buttons on the remote control...

Bob and I will have to have a race to see who can get this in their Netflix queue faster... I can't imagine they're swimming in copies...

Wow, Bob - I can't believe you've never seen this one either. It's definitely required viewing!

And ockerouac, I don't know for sure if Silent Rage will make you into a Norris fan but you owe it to yourself to give it a shot!

Good luck on getting to it before Bob!

Well in case anyone feels like checking out a video of the awful scene where chuck battles some dirty bikers, it's here: