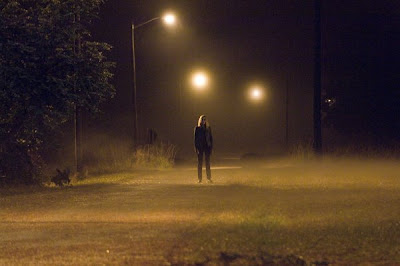 For a film that's been lingering on the shelves for almost a year, anticipation for the home invasion romp The Strangers has remained awfully high. In fact, in recent weeks it seems like the horror community has been actively rallying around this film for it to really deliver. It's got a simple premise going for it, seemingly a hard one to fumble - an attractive couple in an isolated home find themselves under attack at the hands of several masked assailants. But even with a simple story to tell, a lot can go wrong.
Thankfully, under writer/director Bryan Bertino's watch, very little goes wrong in The Strangers. Well, almost everything goes wrong for its protagonists (Scott Speedman and Liv Tyler) but for audiences who are banking on being seriously scared, everything's golden here.
I won't say that this is a perfect film, and I'd also hate to oversell how unnerving it is. But really, there's only minor tweaks I wish had been made. For example, I would've liked for Bertino to have cut a brief flashback showing us an earlier moment in Speedman and Tyler's evening. It's a pointless, distracting moment that seems to only be there to pad the film's running time. I also wish that a line spoken towards the very end of the film had been dropped. In fact, I'd be surprised if this line had even been in the film initially as it feels like it was dubbed in after the fact as an appeasement for test audiences who felt uncomfortable with so much ambiguity. But I'll emphasize that neither of these issues affected my overall satisfaction with The Strangers.
As for ranking its scare factor, I'll just say that I'd put it in the high end of movies that have done a number on me (some other movies in that company would be The Blair Witch Project and Halloween). As with any horror movie, I'm sure there are people who will watch The Strangers with total indifference while others are cowering in their seats but macho I ain't and this film prompted at least a few shrieks out of me and forced my hands up to my face a few times.
What can I say? It scared me good.
Bertino really has a handle on how horror films are supposed to work and his use of sound (or sometimes lack of sound) and framing (such as his frequently Carpenter-esque positioning of psycho and prey) comes in second to none. And as a writer, Bertino wisely avoids serving up even a hint of an answer regarding Speedman and Tyler's ordeal. My worst fear with this film going in was that the chilling line spoken by the killers - "...Because you were home." - wouldn't turn out to be quite true, that there'd be some underlying reason for the attack on this particular couple in this particular house. But no, the audience is left on their own to wonder what it all means.
Some will likely read that as a debit, feeling that the onus was on Bertino to graft some greater meaning onto his film's events - especially in this age of tell-all origin stories where suddenly audiences have to be spoon-fed the backstories as to why Leatherface or Michael Myers commit the henious crimes that they do. So for a contemporary genre film to resist that call for pat answers (especially outside the realm of something with a more arthouse intent like Funny Games) is gratifying.
I'm sure that someone like Rob Zombie would look at this material and see an opportunity to delve into the Stranger's broken home lives so it's to Bertino's credit that The Strangers is about nothing more than the fact that on any given night someone you never met could come to your door with a knife or an axe or a gun and try to end your life. If there's a reason for it, then it's not scary - it's just violent.
Some viewers might also carp that The Stranger's opening narration removes any suspense from the film. Outside of saying, "You have seen The Texas Chain Saw Massacre, haven't you?" I can say that opening with a tease as to some brutal event and then rewinding to show us what led up to it is a storytelling device that always works for me. If anything, rather than encouraging boredom, it's knowing just a little of a character's grim future that makes me more uneasy waiting for their date with the inevitable.
It's been fashionable in recent years for filmmakers to evoke (or outright remake) the iconic horror films of the '70s. But while some of these movies have worked better than others, The Strangers is the first to feel like its scares don't come up short in comparison.
Posted by Jeff Allard at 10:37 PM

Email ThisBlogThis!Share to TwitterShare to FacebookShare to Pinterest
Labels: The Strangers

Good review. I agree with pretty much everything you said. The "final shock" in the ending was about the only thing that had me groaning, but I am willing to forgive the movie for that because so much of it is done right.

Like I said, I thought the first half was very scary. The sound design crew on this film are the real stars.
I wished I could have liked it more, but your review is very rewarding to read. It's passionate and you make a strong case why I should revisit this down the road.

Thanks for the input, guys!

Bob, I hear you about that last 'gotcha' but I was willing to roll with it at that point. And Jerry, sorry you weren't as high on this as I was but thanks for taking the time to read the review - and I agree that the technical credits were outstanding!