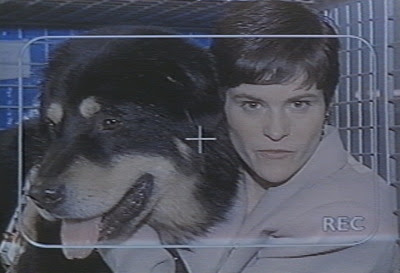 For horror fans, the early '90s were an often galling time (although I guess for horror fans, every time is an often galling time but anyhow...). Thanks to the stigma that horror had developed during the '80s, the filmmakers behind well-made, crowd-pleasing efforts such as Silence of the Lambs, Cape Fear and Misery demurred from using the horror label while ham-handed offerings like Ghost in the Machine, Brainscan and Children of the Corn II: The Final Sacrifice were flying the flag for horror whether anyone wanted them to or not. But while these latter films didn't do the genre any favors, I'd like to show some attention to one of my favorites failures from this time - 1993's dog-eared tale of science gone wrong, Man's Best Friend.

When a movie gives you Lance Henriksen as a brilliant, driven, self-justifying douche bag of an animal experimenter, and you have him out to retrieve his (ahem!) pet project - an escaped super-canine named Max who has a laundry list of scientifically granted abilities and a potentially (ahem!!) hair-trigger temper, I'm already in. As Dr. Jarret, Henriksen walks over every other performer in the film, exploding at random moments in the interest of warning anyone in earshot about his missing mutt's imminent meltdown ("He is gonna SNAP!!").

But while Henriksen is coming apart before our eyes, his tail-wagging time bomb is comfortably curled up at the foot of Ally Sheedy's bed. Sheedy's character of TV reporter Lori Tanner is someone who desperately wants to score their big break and blowing the lid off animal abuse seems like the smart way to go. But after breaking into the EMAX facility after hours to film Henriksen's handiwork and show the world just how shitty Dr. Jarret treats the four-legged world, she lets Max out of his cage and ends up taking him home against the strongly-stated protests of Perry, her live-in boyfriend (played by Fredric Lehne - who recently had a recurring role on TV's Supernatural as the Yellow-Eyed Demon).

Max is essentially a furry Frankenstein's Monster - he's not evil, he's just more dog than the world can handle. And writer/director John Lafia (Child's Play 2) does a pretty good job of hitting all the bases that you'd want a killer dog movie to get to. Cats, mailmen, newspaper delivery boys and over-zealous pet control officers are all on Max's "to bite" list. Oh, and Max also makes time to show the neighborhood's lone hot collie what love is - although he doesn't do it gently.

If Man's Best Friend isn't all that it could've been (disappointingly, initial plans to have Max undergo a final transformation, revealing himself as a cyborg creation courtesy of FX wiz Kevin Yagher were scrapped during filming), it isn't just a sad little pup of a movie, either. To my mind, any movie where a dog pursues a cat up the side of a tree and then proceeds to swallow the living cat whole (apparently they must've given Max some anaconda genes, too!) is automatically a film of at least some merit.

But the clincher - and the scene that makes me wish that a Man's Best Friend 2 could've been in the cards somehow - is a scene late in the film where Max knocks poor Perry to the floor, proceeds to lift his leg over Perry's prone body and then, well, pees on his face. That'd be a hard thing for anyone to get over - even under the best of circumstances - but earlier in the film, Lafia established that Max's urine is so acidic that it could fry the paint off a fire hydrant. So one can imagine that a big honking faceful of it wouldn't exactly feel like butterfly kisses.

After his mutilation, Perry is removed by ambulance, never to be seen for the rest of the film. But my fondest wish for Man's Best Friend 2 was that Lehne could've returned as Perry, having survived his ordeal to become the world's foremost expert on the dangers of genetically altered canines - but yet with a new face something along these lines: 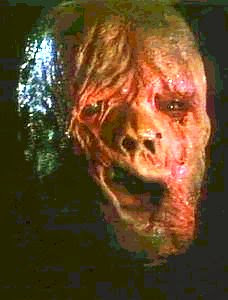 Even better would've been if actor John Getz could've joined Perry in a reprise of his unlucky Fly and Fly 2 character of Stathis Borans. For those who don't remember, Borans was vomited on multiple times by Jeff Goldblum's tragic Brundlefly character and the corrosive properties of fly vomit (man-sized fly vomit, at that) left Borans down by a few appendages.

As corny as it sounds I do believe that whatever doesn't kill you makes you stronger and I really would've liked a definitive answer on whether having a man-sized fly regurgitate corrosive bile on you or having a dog spray their super-strength fire urine in your face is the better character builder.

Unfortunately, we'll never know - although if Perry's injuries forced him to utilize a seeing eye dog, I'd automatically have to give it to him. The combination of adversity and irony is just too hard to beat.