I Was A Teenage Were-Cicada 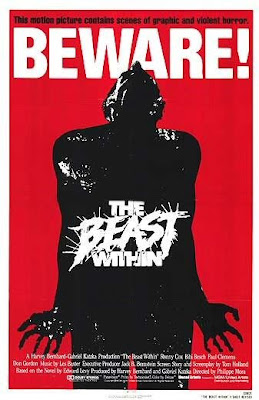 When the monsters of an earlier era carried various swooning female victims back to their lairs, it was mercifully left to the imagination what these companion-starved monsters may or may not want to do if they had some time alone with a woman. While the Creature from the Black Lagoon might’ve had designs on becoming an inter-species rapist, for example, the mores of the time kept things chaste between him and Julie Adams. The makers of 1980’s Humanoids from the Deep, however, didn’t need to pull any such punches – this was the ‘80s after all and audiences didn’t need to be molly-coddled anymore. But Humanoids from the Deep only told part of the sordid story. Two years after Humanoids, a film arrived that dared to show the long-term effects of forced monster intercourse, or FMI for short: 1982’s stirring coming of age tale The Beast Within.

Beginning with a flashback that takes place in the early ‘60s, we see Eli and Caroline MacCleary (Ronny Cox and Bibi Besch) as a newly married couple en route to their honeymoon when they run afoul of car trouble on a deserted rural road (in the Deep South, natch). After Eli runs off alone to the nearest service station for help, his defenseless bride is dragged into the woods and sexually assaulted by an inhuman thing (kids, don't honeymoon in Mississippi!).

After this awkward incident, the narrative jumps ahead to the present day with the MacClearys worriedly attending to undetermined health problems with their seventeen year old son Michael (played by Paul Clemens) as the boy’s long-denied heritage is becoming sorely apparent. And by "sorely", I mean Michael’s suddenly taken to venturing out at night to put a major hurt on people. He also flares his nostrils a lot, which is real uncomfortable to watch.
As it turns out, the thing that raped Michael’s mother was a man-turned-monster called Billy Conners and Billy (through means never adequately explained by the script) is now sharing the mind and body of Michael in order to exact vengeance on those who originally brought Billy to his inhuman state. For reasons further unknown, this possession and Billy’s skin-shedding emergence from Michael is also linked to the lifecycle of the insect species known as the cicada. Go figure!

What follows is a more lurid version of ‘50s tales like I Was A Teenage Werewolf that addressed the angst and physical self-consciousness of adolescence in monster movie terms. There’s also a hint of Cronenbergian body horror involved as Michael’s ordeal calls to mind the transformations of Rabid, The Brood and The Fly.

As Michael situation becomes more and more dire and as those who fear the wrath of Billy Conner grow more desperate (a group that involves almost everyone in Nioba, Mississippi), the makers of The Beast Within are called upon to bust out some classic early ‘80s effects work. While lots of horror films in the early ‘80s used state-of-the-art means to accomplish previously impossible transformation effects – none exploited these effects with the quite the same gratuitous gusto as Tom Burman's work on The Beast Within. This is a film that stubbornly refuses to concede that less is more and it has the show-stopping on-camera transformation to prove it. The ads for this film dared audiences not to flee their seats during the last thirty minutes of The Beast Within and damn if the last thirty minutes of this movie don’t shovel on the horror as promised.

Director Phillipe Mora didn’t go on from The Beast Within to do much worthwhile, unfortunately, lending his talents to the likes of Howling II and Communion. But this tawdry little B-movie has a faithful following to this day. Tom Holland, later to go on to direct Fright Night and Child’s Play, wrote the script based on a novel by Edward Levy and while it isn’t a tremendous script (I’m guessing that Levy’s novel wasn’t anything special to start with), it has a nice skuzzy, Southern Gothic vibe to it and it duly piles on the grotesqueries.

The Beast Within is also blessed with a top-notch roster of character actors (the kind of predominantly older crew you never see in current horror movies) who lend conviction to even the most ridiculous moments. Besides Cox and Besch, there’s also L.Q. Jones, Luke Askew, and R.G. Armstrong. No matter how implausible the story gets, the seasoned cast keeps it real. Unfortunately, the one weak link is the Beast himself, relative newcomer Paul Clemens (who I remember from a Quincy episode from around that time but nothing else) who’s visibly overburdened by the chore of making the tormented teen an empathetic, yet frightening character.
Still, there’s a pall of grimness to The Beast Within that prevails over Clemens’ shaky performance. A lot of filmmakers would’ve flinched from following this pulp horror premise to its sorrowful end but Mora sticks to his guns. Few horror films can match the appalling denouement this film offers – a bitter conclusion that ends this silly rubber monster movie on a deeply tragic note.
That tragic note being this: that woman-raping swamp shit will always find a way to carry on their legacy.
Posted by Jeff Allard at 9:32 PM

Email ThisBlogThis!Share to TwitterShare to FacebookShare to Pinterest
Labels: The Beast Within

Outstanding post and the most insightful piece I've ever read on THE BEAST WITHIN, good job connecting it to the teenage monster movies of the fifties and giving props to TOM BURMAN's exceptional work. Back in the day I remember seeing a full page spread of the effects work in FANGORIA and it actually gave me nightmares. Thanks for spotlighting this flawed but unique movie.

Thanks! THE BEAST WITHIN has been burned into my brain since I saw it at the drive-in (double billed with the Chuck Norris actioner FORCED VENGENCE!). It was the first R-rated horror movie I'd ever seen on the big screen and it even though it's far from perfect, it left a lasting impression on me!