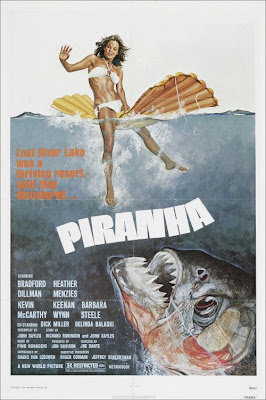 Some movies should be kept top secret until maybe, I don't know, a few weeks before their release. I would say even a few days but I know that's unreasonable. And I don't mean they should be kept 'top-secret' in the sense that there's no test screenings or whatever. I mean that no one should know the movie is even being made. Because there's some movies that are just so promising and so exciting that once it's known that they're in production, it immediately puts other films that one might've otherwise enjoyed at an unfair disadvantage.

What I'm trying to say is that I don't know how I'm supposed to watch any movies between now and next July (that's right - not this July but July '09) and not have a mixed response to them. Because I'm pretty sure that films like The Happening, The Strangers, and Midnight Meat Train are not going to be in 3-D and that they also won't have any piranhas. I'm sorry but the fact is, knowing that Piranha 3-D (!!!) is coming out a whole year from this July is going to make it near impossible for me to settle for anything less until then. When I walk out of a movie like, say, The Dark Knight and someone asks me how it was, I might just have to impulsively punch them in the face and say "There was no piranhas in it, THAT'S how it was!"

To my mind, the Weinstein Co. should've kept this one under their hat for awhile. I mean, at least until this summer was over. After the summer, well, ok. That's do-able. After all, no one really expects a fall or winter movie to be a 3-D piranha movie. That just doesn't happen so I wouldn't hold it against those movies as much. But the summer? Come on!

Of course, we live in an age where it's considered gauche to be a film fan, a horror fan even, and to actually get excited about these kinds of things. I'll read about the announcement of a movie like Piranha 3-D, immediately flip out because it's the greatest news ever, and then go to the discussion boards to see the reaction only to see that this miracle news has been greeted with nothing but scorn and indifference. And I have to wonder, "Jesus, what planet am I living on? When did movie fans become such a bitter bunch?"

Tell me about Piranha 3-D and I'm already imaging what the poster will look like and what the cover shot for FANGORIA is going to be (my guess for the cover text: "They're Swimming Off The Screen!"), while the reaction of everyone from 'DarkChyld98' to 'myndtrapp' is "Eh, looks stupid. It's about fishes? Please! And 3-D? Really? How lame!" I don't know - maybe I'm some kind of anomaly. Or maybe I didn't get the memo that cool shit isn't cool anymore - but I'm sorry, if Piranha 3-D doesn't ring your bells then maybe horror movies just aren't your thing.

I don't care that this is a remake of a movie that's bound to remain the smarter and more satisfying of the two (well, of the three if you want to count the made-for-Showtime remake from 1995). And I don't care that the director (Alexandre Aja) hasn't made a movie yet that's really impressed me (although High Tension and the Hills Have Eyes remake do have their fans) because none of his previous movies were 3-D piranha movies. As far as I'm concerned, this has the potential to be the Greatest Movie Ever. Or at least it might be The Only Movie That Matters in the summer of '09. And listen, if nothing else it'll be the only 3-D piranha movie out in July '09 and that's nothing to sneeze at.

Whatever happens, they HAVE to go on to do a remake of James Cameron's sequel Piranha II: The Spawning. Because the only thing better than seeing piranha in 3-D is to see flying piranha in 3-D. 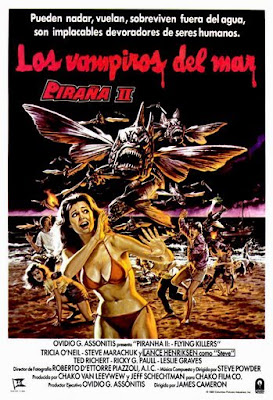 I just don't want to know about it until the title is up on my local theater marquee.
Posted by Jeff Allard at 4:10 AM

I may just be the only PIRANHA II: THE SPAWNING defender in the whold wide world.

A movie about flying piranha with only one fan to its name? That's impossible!