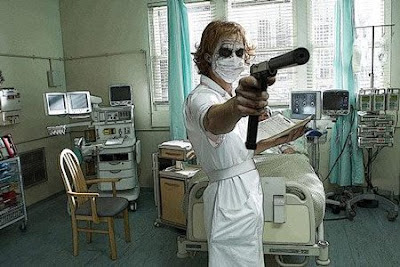 In the November 1982 issue of Twilight Zone magazine, famed cartoonist Gahan Wilson reviewed John Carpenter’s The Thing and in comparing it to the original Howard Hawks/Christian Nyby The Thing From Another World, he pointed out that the world of 1982 offered a much harsher environment for its alien invader to contend with than the one that James Arness’ interstellar vegetable had encountered in 1951. The heroes of the 1982 film were a much rougher breed (as Wilson wrote: "I think if Jim Arness had shown up in front of this lot with his super-carrot makeup, they'd have spat at him."), as was the indomitable alien they had to thwart - a being capable of so many more tricks than its '50s counterpart. As Wilson noted: “It’s a good thing Carpenter's provided them with something really diverting.”

Wilson's review sprang to my mind the first time I saw a clip revealing Heath Ledger's unprecedented take on The Joker in The Dark Knight. The inclusion of The Joker this time around immediately invites a more direct comparison with Tim Burton’s original Batman (1989) than 2005’s Batman Begins did. But without having seen The Dark Knight yet, I can already tell you exactly how they compare: if Michael Keaton's Batman had to square off against Ledger's Joker, he'd likely crawl to a corner of the Bat-Cave and put both barrels of a Bat-Shotgun in his mouth. The End. And if Jack Nicholson’s Joker were to try any shit with Christian Bale's Batman, the Harlequin of Hate would find himself curb stomped before he uttered a single "Ha". Because that's just how this Batman rolls.
I only wish that Daniel Craig's James Bond could spend a rough weekend in Bale's Gotham City. Now that's a Brave and the Bold team-up I'd like to see (the Brave and the Bond?) - two sociopathic animals laying down all the hurt the city can stand. It's just too bad that Ledger's Joker couldn't be there to challenge them - but maybe Javier Bardem could pinch hit as The Riddler.
In Under Siege 2 (1995), Steven Seagal's Navy SEAL-turned-cook Casey Ryback said "No one beats me in the kitchen." Well, Gotham City is Batman's kitchen. And he likes to cook. So it’s a good thing that Nolan and company have provided the Cowled Crimefighter with something really diverting. And then some.
Posted by Jeff Allard at 10:30 PM