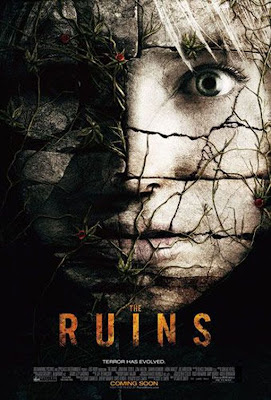 When I read Scott Smith's novel The Ruins, I enjoyed it but doubted the likelihood of a film adaptation doing it justice. And while some might say the movie really didn't give the book its due, even with Smith himself handling the screenplay chores, I enjoyed it and I was surprised by just how graphic it was willing to be. But for whatever reason, very few people went to the theaters to see it when it was released this past April - even the horror crowd seemed unmotivated to check it out. So when this tale of man-eating plant life arrives on DVD tomorrow, many viewers coming to The Ruins for the first time might be surprised that such a grisly offering got ignored. Or, on the other hand, some might say "God, I'm so glad I didn't play to see this shit in the theater!"
Either way, the unrated disc arrives in stores tomorrow.
My DVD review is currently up over at Shock Till You Drop.
Posted by Jeff Allard at 4:37 AM

Email ThisBlogThis!Share to TwitterShare to FacebookShare to Pinterest
Labels: The Ruins