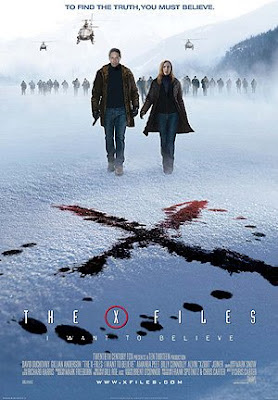 Realizing that I don't want to see the new X-Files movie has really taken the wind out of my sails. Seriously, it literally makes me feel physically deflated. As an avid X-phile, the fact that I feel completely indifferent to seeing an X-Files movie just isn't right. This should've been one of the must-see movies of the year for me, bar none. I'm one of the few fans who found a lot to like about the troubled last couple of seasons of the show (a lot to be frustrated by, too, but it was far from all bad) but here we are, with Mulder and Scully on their first case in six years and I just can't be bothered. The almost universally bad reviews have had a lot to do with my attitude, of course, but whereas usually I'd just ignore all that and go ahead and make up my own mind, I feel like taking the advance word on this to heart is the smarter move. I don't think this one is going to surprise me at all - not enough so that I can't wait a few more months to see it.
Like I said, I won't trash a film I haven't seen yet but it does leave me at a loss me that Chris Carter couldn't even come up with a movie that a fan as diehard as myself would even want to see. How is that even possible? To me, that rates as an X-File in and of itself.
Maybe 20th Century Fox just didn't come up with the proper campaign to sell this with but I have a feeling that their hands were tied by a lackluster product. After seeing the first underwhelming trailer for I Want To Believe, I figured that more promising footage must be on the way soon but it never materialized. I'd go to the wall to defend the show - and I wish that this movie would've shown the crop of cult TV upstarts like Heroes and Lost who their daddy is - but I'm feeling nothing but doubt.
If only Carter would've taken whatever steps were needed to bring back some of the talented writers who helped make the show so stellar in the first place - writers like Darin Morgan, Glen Morgan, James Wong, John Shiban and Vince Gilligan. To have some of these people involved in the new movie could've resulted in a satisfying relaunch of the franchise. I think that, unlike Carter, these writers would've been far more attuned to what the fan's expectations were.
But in collaborating with frequent X-Files writer Frank Spotnitz (apparently the last Yes-man standing), it looks like the screenplay they authored missed the 'X' they were supposed to be aiming for.
Now, it may turn out that I'll see this movie down the line and love it. I might kick myself for not rushing out to see it on the big screen. It may restore my faith in the franchise. Will that happen? Let's just say that I want to believe - but I'm just too afraid to find out.
Posted by Jeff Allard at 9:46 PM

Email ThisBlogThis!Share to TwitterShare to FacebookShare to Pinterest
Labels: Chris Carter, The X-Files

I was very excited by this movie and now I think I'm going to wait for DVD too.
First of all I was kinda shocked by the fact that i did not get goose pimples from the trailer.
Then the T.V ads started up and I could not understand why they were not showing anything.
Now I hear that there really is not that much to show. I don't understand why they didn't just take the gloves off with this movie considering what happened with the first.
They should have just gone with a total balls to the wall horror story so that at least we could see something bashing through a door in the trailer!
I guess they are trying to go for something more sophisticated but that and a quarter will buy you...not much. Even the positive reviews (I scan them, I don't read them) seem to be warning me not to expect anything exciting to happen. As far as I'm concerned that's a cue to save my $ and sanity and wait for the dvd...

You're not going to kick yourself for waiting for DVD, but by the same token if you have a change of heart and go see it in the theater I think you'll like it more than you think. This is a quieter film than I was expecting, and the actual X-file portion of it is only about average for the series. However, I think the movie does some good things with the characters and their relationship, and does give the viewer food for thought, if not a whole lot of thrills and chills.

Thanks for the comments, guys. I have a feeling I'm going to keep waffling on whether or not to see this and then the movie will be out of theaters anyway! If this is nothing more than an average episode of the show, I guess I'll still get some enjoyment out of it but it baffles me why a stronger - or at least a more straight-up scary - story wasn't developed.