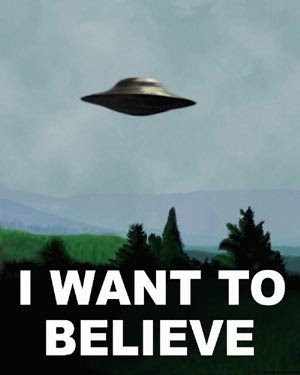 In the latest issue of Entertainment Weekly (#1001), Stephen King spends his ‘Pop of King’ column musing on what constitutes a truly scary movie and whether the size of a film’s budget has anything to do with it. As an example of accomplishing major scares with minimal funds, he points to this summer’s sleeper hit The Strangers. Fair enough. But then he also goes on to doubt that the upcoming X-Files movie will be any good because it looks too much like a big budget Hollywood blockbuster (“the new X-Files movie, on the other hand, looks big…” he notes, going on to say “…but horror is not spectacle and never will be.”).
I dunno – to an extent I agree that down and dirty, low budget horror is scarier than slick studio productions (although I also think this commonly shared attitude too easily forgets the indelible impact of such studio-produced films as The Exorcist, Alien, and The Shining) but in this instance he’s using the wrong film to make his case. After all, don’t X-Files fans have the right to expect a certain level of excitement in keeping with the tone of the series? If anything, the new movie looks modest compared to some of the show’s bigger ‘mythology’ episodes (and the previous X-Files movie - Fight the Future - from 1998). The only "big" element I’ve seen featured in the X-Files trailers so far is, well, helicopters and that doesn't quite stamp it as a summer movie-league spectacle. If anything, for the sake of selling tickets to anyone outside of the show’s core audience I think that The X-Files: I Want To Believe could afford to look a little more spectacular.

King also disparagingly compares The X-Files movie with 20th Century Fox’s other current horror offering, M. Night Shyamalan’s The Happening, even though he has yet to see The X-Files. Why does he give the premptive edge to The Happening? Because “M. Night Shyamalan really understands fear”. Well, does he understand it that much better than Chris Carter? To date, Shyamalan has made one great undisputed horror classic (The Sixth Sense), a couple of other movies (Unbreakable, Signs) whose merits continue to be debated, and a few that – for right or wrong – have far more detractors than supporters (The Village, The Lady in the Water, and The Happening). On the other hand, Chris Carter is responsible for nine seasons worth of arguably the scariest show ever to air on TV in addition to three intense seasons of a worthy companion show (Millennium). Did Carter pen all the best episodes of these shows? No – but Carter presided over both The X-Files and Millennium with a strong, overriding instinct as to what would make for the scariest television possible. Has Shyamalan ever offered anything quite as insinuatingly creepy as the second season, Carter-scripted X-Files tale of a death fetishist “Irresistible”? Not to my mind. So if we’re talking about who has the better résumé when it comes to scaring audiences, please give the edge to Carter.

And if we’re talking about someone with something to prove, as King says in regard to Shyamalan and The Happening, I think Carter has just as much to prove in showing that The X-Files is not just ‘90s nostalgia.

Will The X-Files: I Want To Believe deliver the same scares as the best episodes of the series? I’d love to think so. But whether it does or not, it appears to be staying true to what made the series a fan favorite in the first place. So why would King go out of his way to downgrade it based on such sketchy reasoning? Who can say? Maybe it’s just the X-Files fan in me that senses that a conspiracy must be afoot.
Posted by Jeff Allard at 4:53 AM