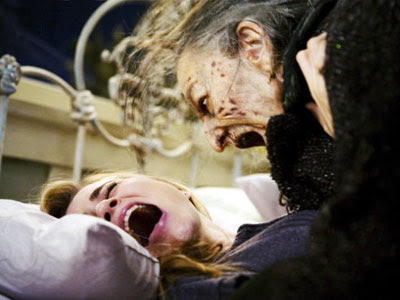 With early impressions of Sam Raimi's Drag Me To Hell trumpeting it as a victorious return to the genre for Raimi - a film that sports the trademark camera moves and gonzo sensibilities of his earlier horror films - it looks like fans will have a good time to look forward to this May when Drag Me To Hell hits theaters.

But Drag Me To Hell isn't alone in reviving 'fun' horror this year. If 2009 can be characterized as having an overriding trend, its that horror seems to be hearkening back to the crowd-pleasing era of the '80s. My Bloody Valentine 3-D was one of the best times I've had in a theater in awhile - an unabashed, gore-soaked thrill ride that had no illusions about what it's audience wanted to see. And next month sees the return of '80s superstar Jason Voorhees in the Friday the 13th remake and from all indications it looks like the filmmakers have endeavored to make this a fast-paced roller coaster ride that cuts straight to Jason in action, rather than follow in the footsteps of Rob Zombie's reinvention of Halloween where a long ramp-up of a psychoanalytical backstory was provided.
Later in 2009 - besides Drag Me To Hell - there's Final Destination: Death Trip 3-D, which ought to give My Bloody Valentine 3-D a run for its money. Then there's the Wolf Man remake, which should be old-fashioned monster movie fun, Richard Kelly's The Box, which looks to be an oddball horror offering with its kitchy '70s setting, and Wes Craven's still-untitled latest, which might be just as satisfying a return to his roots as Drag Me To Hell is for Raimi. What isn't on the horizon for 2009 - save for the Last House on the Left remake and Saw VI - is anything in the way of torture porn or the kind of deliberately grim offerings that have dominated the genre in the later half of this decade. If this is the trend for the foreseeable future, I'm all for it.
The dreary era of Hostel and Saw hasn't done much for me. There's been good films during the last few years but mostly of the arthouse variety (Let The Right One In, The Orphanage) while the general direction of popular horror hasn't thrilled me much. The few films of recent years that have tried to revive a lighter, '80s style of horror - like Slither and Snakes on a Plane - have failed to draw an audience. But maybe this'll finally be the year that horror finds its gory groove again.
Posted by Jeff Allard at 4:46 AM

I loved "My Bloody Valentine 3D", too! Was a great, fun, old school slasher flick. Can't wait for some of these others, too, most especially "Friday the 13th".

It seems like most people felt MBV 3-D really delivered the goods. We'll see how the rest of the year shapes up but things look pretty promising!

As far as fun horror movies go, I'm most looking forward to "Trick r Treat" and "Friday the 13th". "My Bloody Valentine 3D" was definately filled with that 80s vibe too.

We'll see if Trick R' Treat actually gets released. For some reason, Warners seems reluctant to put it out. But maybe after all the acclaim it got from festival showings last year, they'll realize that there's an audience for it.

Someone needs to pull their head out their behinds and get Trick R Treat the release it deserves this year!
I haven't even seen the movie but from the advance reviews and other things I've read about, it sounds like this year would be perfect for it.
MBV 3D was pure 80s slasher and I loved it...now if they'd just done something different than the trick ending they used.

Yeah, putting Trick R' Treat in theaters for Halloween seems like it'd be a no-brainer but here it is two years or so since the movie's been completed and no release date has been set. I'm hoping that'll change before too long.

You'd think that after the success of "True Blood" they'd be trying to rush out "Trick r Treat" for the Anna Paquin connection. I remember seeing trailers for it and promos on the cover of "300" hyping it up, then.....nothing.

It's hard to figure. When my wife saw the trailer online two years ago, she couldn't wait to see the movie and she's not a hardcore horror fan at all. I think Warners has completely underestimated the demand for this movie but when it comes to studio execs, their logic doesn't always add up.

While I'm glad it looks like we'll have a few "fun" horror flicks this year, I just wish horror wasn't so trend driven in general. Whether it's a fun, cheesy horror flick or a brutal, sleazy grindhouse type of movie, all I ask is that it be good, and if possible, at least somewhat original. MBV was a blast, and I hope F13 is as well, but if we start getting back into the same rut of "fun" but otherwise bland horror films that we had in the eighties, that's no better than a string of derivative torture porn flicks.

Personally I've always enjoyed watching the horror genre run through each new cycle. I know it can be kind of a drag when too many copycat films appear but for me, it's part of the appeal of following the genre. These waves of films represent little pockets in time and I've found that as annoying as any given trend might be at the moment, I always end up looking back fondly on it eventually.

As for the prospects of a new wave of fun, popcorn flicks - if that's all that's out there, then that would be a bummer. But for now, I'm happy that the few coming up look great.