Ghost Rider 2: The Kingdom of the Flaming Skull 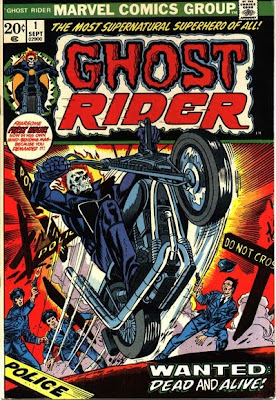 Sure, Ghost Rider (2007) was basically shit but as a fan of the character I didn't want that to remain the sole attempt at a Ghost Rider movie. And now, happily, it looks like it won't be (read Variety's story on the sequel's development here). Groan about the idea of a Ghost Rider 2 all you want but Ghost Rider is just too cool to let him wash out like a chump after just one trip to the big screen. I mean, really - they tried three times to get The Punisher right (and finally succeeded on the third attempt - too bad no one showed up to see it). Isn't it only fair that Ghost Rider get a least a second chance?

His origin isn't much and his Rogue Gallery is on the pathetic side (although I've always had a soft spot for The Orb) but no one can touch Ghost Rider's look. He's a guy with a flaming skull riding a motorcycle - it doesn't get any cooler than that. Comic books are filled with guys in capes and tights - a flaming skull trumps that any day.
And if the next movie should turn out to be lousy, well, the way I look at it they'll still have to make a third film. If you're in for an inch, you're in for a mile. Seriously - if you're just one movie away from a Ghost Rider trilogy (and remember you read the words "Ghost Rider Trilogy" here first), it'd be insane - and even against the laws of nature! - not to make it happen. And once the trilogy is complete, well, it'll just be a matter of waiting for the inevitable reboot of the franchise.

Yep, the way I see it, in about twenty years there's going to be a frigging amazing Ghost Rider movie. And if one comes sooner than that, consider me pleasantly surprised. If it doesn't, hey - you can't rush quality.
Posted by Jeff Allard at 10:13 AM

I've always loved Ghost Rider as well. I think it should take on a darker tone this time around and with Goyer in the mix, I'm banking it will).

As for the villain part, the Orb would be cool. Mephisto would be also be a good choice.

Well, I know that the Simpsons' Comic Book Guy is thrilled about GR2:

From "Brother's Little Helper:"
(Bart drives by in his stolen tank)
CBG: Egad - a maniac cutting a swath of destruction! This is a job for the Green Lantern, Thundra, or possibly... Ghost Rider.

BTW, agree with you on the coolness of Ghost Rider's looks. No, it does NOT get any cooler than that.

PoT, FF - thanks for the comments! Who knows if this latest GR will be worth a damn but I do think the potential for a really cool movie is there. And regardless, I just can't help but geek out over Ghost Rider.