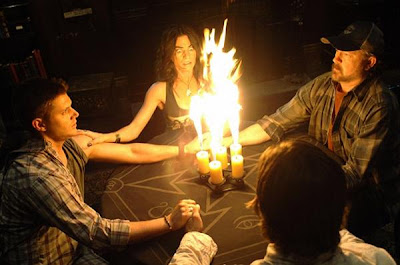 Chronicling the cross-country adventures of brothers Sam and Dean Winchester as they travel the US in a '67 Chevy Impala battling all manner of demons, ghosts, and assorted urban legends with a trunk full of weapons and a handy knowledge of the arcane passed down from their dad John Winchester (Jeffrey Dean Morgan), Supernatural was initially referred to by many TV critics as The Hardy Boys Meet The X-Files. While on some level, that glib description was accurate (just as it wouldn't have been completely wrong to initially describe The X-Files as Dragnet Meets Project U.F.O.), it should now be said that Supernatural has come to rank with the best of TV horror. Not just today's best, but the all-time best. With its fifth season premiere airing tonight at 9 on the CW, here's five reasons why, if you aren't doing so yet, you ought to be watching Supernatural.

5. Jensen Ackles and Jared Padalecki
Technically that's two reasons, but in Supernatural you can't have one without the other. Without these two, Supernatural would've been dead in the water years ago. As good as the rest of the show might be in regards to writing, directing, and production values (and it's very good in all these areas), without the wholly believable interaction of its two leads, there wouldn't be a reason to watch week after week. While at first glance, Ackles (Dean) and Padalecki (Sam) might seem like blandly photogenic leads, it doesn't take long in their company to realize that these two have real acting chops. From the beginning, they've anchored Supernatural by creating the unmistakable chemistry of real-life siblings.

4. It's Not All About Pretty Faces
While Ackles and Padalecki wouldn't go hungry living off their looks, and as lovely as their female co-stars can be, Supernatural has never been about youth and beauty. Sam and Dean are following in their father's footsteps as part of an underground group of demon hunters and that world is full of grizzled faces. By casting character actors like Jim Beaver, Steven Williams, Mitch Pileggi, and Michael Massee as members of their dad's generation of hunters, Supernatural reminds us that if Dean and Sam do manage to live to be old, or even middle-aged, that they'll be wearing all the hard-fought mileage of those years.

3. It's Not Lost Up Its Own Ass
While Supernatural does feature season-long arcs (much like Buffy the Vampire Slayer did), the show's creator and executive producer Eric Kripke also knows the value of single episode, done-in-one storytelling. It reminds me of the unassuming genre shows from the late '80s and early '90s that I used to love like Werewolf, Friday the 13th: The Series, Forever Knight and the early X-Files where it wasn't about waiting five years or more for a pay-off. If you miss that kind of succinct storytelling, you can find it in Supernatural. Even though it's on its fifth year, new viewers don't have to feel like they'll be too lost in long-running storylines to catch up and viewers who have been watching the show from the beginning don't feel like they've been strung along.

2. It's Hardcore About Horror
This is not Buffy, or Angel, or Charmed. This isn't even the sci-fi horror of The X-Files. This is a full-blooded horror series that pulls no punches. I'm constantly shocked at the level of violence that gets through on the show (the grisliest episode to date may be "Time On My Side" from Season Three with Billy Drago as a 17th century doctor who has discovered a ghoulish way to achieve immortality). While there's obviously some concessions to TV standards, I'd put the show on equal footing with most R-rated horror fare. And supremely eerie episodes like "Faith" (Season One), "Everyone Loves A Clown" (Season Two), "The Kids Are Alright" (Season Three) and "Family Remains" (Season Four) prove that Supernatural doesn't depend on gore for its scares. Oh, and it also has the best monsters on TV.

1. It's One For The Ages
Although it's still a cult show rather than an X-Files or Lost-type cultural phenomenon, what I'm sure of is that new fans will be discovering Supernatural for years to come. Even if Kripke and co. roll a gutterball with this season (which I'm betting they don't), Supernatural has already earned its place in the pantheon of great horror shows. While it began as a slick and entertaining 'monster of the week' program, over the last two seasons it's mythology has become richer (without becoming convoluted), the relationship between Sam and Dean has become more complex, and in blurring the line between good and evil and in being more ready to embrace life's melancholy (as in such episodes as "Metamorphosis", "Wishful Thinking", and "Afterschool Special"), Supernatural has shown an increased level of emotional sophistication.

Kripke has said that his plan has been to end Supernatural for good at the end of the fifth season. But with the show becoming more popular, that may not be possible. Still, no matter what happens after Season Five, the fact that the series has lasted this long (remember that the new Night Stalker debuted in 2005 as well and quickly vanished) and been so consistently good is a feat that has bordered on the, well, supernatural.

This show has gotten better over time, but not really changed it's premise or feel, just improved a bit on what was already good.

Love the horror, the real scares and creepy moments. That clown episode will be one for Kindertrauma moments of the future, without a doubt.

Glad it's back, and I am honestly okay if it ends after this season. But, if they do go on, go on only WITH Sam AND Dean. Don't try to pull a "Doggett and Reyes" here, people.

Thanks, Wings! I think Supernatural has definitely become a better show over time while, like you say, not losing what made it enjoyable in the first place. I would like it if the show ended the way Kripke plans it to - I'd rather see it go out on top, unlike so many other shows - but we'll see what happens.

Supernatural has gotten better through out it's run.. I think Season 5 will set the bar high in television world.

And BTW- pretty faces, how about Daddy Winchester, Jeffrey Dean Morgan was awesome as Dad..

Hey Laura, I agree - Jeffrey Dean Morgan was terrific as John Winchester. Too bad his character had to exit the show so soon. As for Season Five, I think it's going to be a real barn burner!