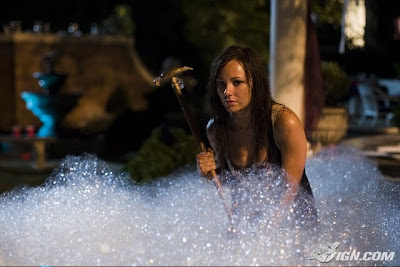 If My Bloody Valentine (1981) is regarded as a second-tier slasher film, then the little-seen shocker House on Sorority Row (1983) is third-tier, at best. That's not a knock against its quality, just an acknowledgement that outside of diehard slasher fans hardly anyone is aware that it exists. Few viewers under the age of thirty (or even many of those over that age) who attend Sorority Row this weekend will have any clue that they're watching a remake. And for those that do know the original, they'll see as a remake in name only. Outside of its college setting and the fact that its sorority sister protagonists try to cover up an accidental murder, the two films are completely different.

I liked this remake quite a bit - about as much as I did My Bloody Valentine 3-D. If you liked that movie, you might like this one too. In both cases, I find it ironic that lesser slasher films like MBV and HoSR were better served by their remakes than slasher royalty like Texas Chainsaw Massacre, Halloween, and Friday the 13th were. With both MBV 3-D and Sorority Row, neither are great films but they display an understanding of what slasher fans enjoy about the genre and they aren't pitched outside of that audience. As a slasher fan, I'm ok with that.

Sorority Row director Stewart Hendler is clearly capable but he's smart enough to not forget that he's making a formula film. Writers Josh Stolberg and Peter Goldfinger likewise give their characters plenty of acerbic, funny lines to throw at each other (the biggest bitch of the sorority, Leah Pipes, is especially good) but in regards to its plotting Sorority Row follows the same story beats as any other slasher film. If you feel like you've had it with slasher films, then this won't change your mind. Personally, I had a lot of fun with it. Some people have a special affection for Westerns, or musicals, or war pictures. I like slasher movies. Those are the films that were huge when I was really getting into horror and they'll always hold a nostalgic appeal to me. And when a new film like Sorority Row gets the formula right, I consider that a good time at the movies.

Click over to Shock Till You Drop for my full review.
Posted by Jeff Allard at 10:38 AM

I'm with you on this one...the movie was great fun. From the moment a sorority girl started lowering herself down a mine shaft, I knew I had a winner on my hands!
-Billy

Glad you've got my back, TF! I had a ball with Sorority Row and definitely see myself checking it out at least one more time on the big screen.

I liked the MBV remake, but on this one I have to disagree with you. I felt like there was a disconnect between the directorial style, which played things relatively straight and low key, and the absurdity of much of the script. I loved Carrie Fisher's small part and the "tire iron of death", but otherwise it felt kind of flat to me.

I don't know, Bob. I don't think the direction was quite so flat - the opening tracking shot, for example, is a good indication to me that we're entering a fantasized, or at least heightened, version of college life - while the events of the story and the actions of the characters kept one foot (or at least a toe) in reality. So the balance of the movie's tone seemed more successful than not to me. But at least we agree that MBV 3-D was great!

I kinda figured Sorority Row would be decent based off the trailers. With a movie like this, it's just better to keep things basic and follow the formula of a genre than to try something too out there. I'm gonna definitely check this one out as soon as I can.

Yeah, don't wait too long to check this out. I have a feeling it's going to sink like a stone - especially with Jennifer's Body coming out next week. I really dug it but I think it's too much a case of "nothing special" to get much of an audience. That said, Jessica - the character that Leah Pipes plays - is one of the most outrageously entertaining characters I've seen lately.

As always, good review, Jeff. (Even if I'll disagree with you on 2001's VALENTINE!) We both thought Leah Pipes was the standout here, too.

I thought the set-up with the prank-gone-bad was handled exceptionally well. The events, the characters' reactions to those events...all rang authentic to me.

It's funny you mention Valentine, Vince - it was on one of the cable channels recently and I recorded it with the thought of giving it another look but before I got to it I ended up having to erase it to make room on our DVR. I know I loved the killer's mask, at least!

As for SR, based on its box office performance this weekend it looks like its going to have to settle for being a DVD discovery for most people.

I did have fun with this one and I think Hendler has a good eye. Loved the slow-mo epilogue, nice touch. Just wished they pushed it a bit further...they were so close to having something brilliant! Still I agree with you that SR and MBV are two of the better slasher remakes.-Unk

Yeah Unk, I agree this could've been one of the greats but it isn't. But as is, it's still one of the better slashers. Definitely one of the best modern slashers.