Why Silence Is Still Golden 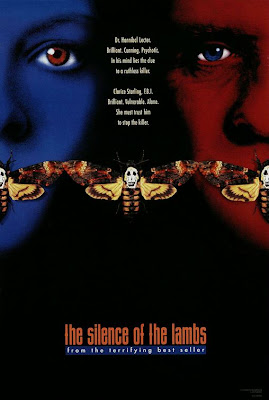 When my wife impulsively pulled out Silence of the Lambs to watch on DVD last night, I thought that would be a good excuse for me to do something else with my time. I love Silence of the Lambs but it's one of those movies I feel like I know like the back of my hand. But as Clarice Starling ran through her arduous training exercise, accompanied by Howard Shore's melancholy but melodic score, I took a seat on the couch to watch a few minutes - and ended up not leaving until the end credits rolled on Lecter on his way to have an old friend for dinner.

As I said a few weeks back when I listed Silence as my number two pick of the best horror films of the past twenty years, it's an easy movie to take for granted. It's been imitated, emulated and parodied to death. But while I didn't think I had forgotten what a great movie it was, it turns out that I actually had forgotten just a little. To watch Silence of the Lambs is to feel a sense of craft radiating from every aspect of the film. This is a film made by people who cared about the story they were telling, the characters they were portraying, and the history of the genre they were working in. How rare is that today? Does it even still happen? It must, but I'd be hardpressed to give a very recent example. Watching Silence last night made me despondent at the thought that we may never see another horror film like it where everything - script, direction, acting, production design - comes together so well.

What made me love Silence from the start, and which seeing it again brought back in a flood of memory, is the sense of sadness that director Jonathan Demme - abetted by the performances of his stellar cast, by Howard Shore's score, and by screenwriter Ted Tally, who adapted Thomas Harris' novel with near-flawless acuity - instilled this movie with. There is an intractable loneliness to Starling's character that no professional triumph, no act of heroism, can ever wipe away. I don't think any movie character today would be allowed to be seen as vulnerable and unhappy as Starling is here. While her determination drives her and she doesn't back down from a single confrontation or obstacle, her emotions are never too far from the surface. This is not some hard-hearted, ultra-capable super cop or some aloof forensics genius. She is rattled during her first encounter with Lecter (sobbing by herself afterwards in the parking lot of the sanitarium), she has to fight to choke back tears when examining the body of one of Buffalo Bill's mutilated victims ("glitter nail polish...that looks like town to me."), and the ghosts of her unrestored childhood losses are ever-present.
In the years since Silence, portraying strong female protagonists has somehow come to mean portraying women who have no discernible human weaknesses. Women are now hardcore superheroes who eat men for breakfast. You'd never see Angelina Jolie, for instance, playing Starling in the way that Jodie Foster did. She'd have to give it right back to Lecter from the get-go and she'd never in a million years be seen actually quaking with fear as Starling does when feeling her away through Buffalo Bill's pitch-black basement. Instead, like an action hero, she'd instantly turn the tables on Bill as soon as the lights went out (spraying the room with uzi gunfire!). And she'd also probably team up with Lecter at the end to give Dr. Chilton what's coming to him. Women heroes have become all about being tough, sardonic, and able to beat the shit out of the biggest men in the room. And while I'm all for seeing examples of strong women, I think it's more impressive to see a character who isn't utterly invincible overcome their insecurities.
There's a humanity to Starling, and to every character in Silence (even the monstrous Lecter), that gives the movie its strength. As soon as Starling sees the newspaper clippings and crime photos from Buffalo Bill's crimes on the wall of Crawford's office, with their glimpses of lives snuffed out and left lying on cold grounds, we feel the spirit of empathy that drives the movie. This isn't a movie that adores its own violence. Even in the movie's most Grand Guignol moment, when Lecter leaves a victim hung and splayed like a butterfly, it's not a moment to gawk at but to be appalled by. Silence isn't a film that celebrates nihilism with rivers of blood but instead knowingly shines a light on the seldom seen river of tears that flow through the horror genre. While Lecter finally flies free at the end, Starling remains grounded by her own tightly-held burden of sorrow. It's not more adventures that the future holds for her, but more monsters. It hardly seems fair - but that's why Silence is a classic.
Posted by Jeff Allard at 7:48 AM

Good blob, Jeff. 'Silence' is indeed an excellent film. As to why female leads in these kind of movies don't have the same depth or weaknesses that Jodie Foster did, I think some of it has to do with where the new crop of directors are coming from. Demme and many other directors starting out in the seventies started working on features for Roger Corman, who let them do pretty much whatever they wanted as long as there was enough action and T&A in the finished product. Many directors now start out working on music videos where the only concern is making the subjects look cool and/or coming up with eye catching imagery. Emotion and character don't really figure into it, so these guys don't get a chance to hone their skills in that area. I'm sure there are other factors, but I think that's a big one.

Hey Bob, I think you're on to something. The rise of directors schooled in music vidoes is likely a big factor in why characterization has suffered in recent years. I also think that somewhere along the way, it was discovered that men and women just like seeing women kick ass onscreen.

Ripley in Alien and Sarah Conner in Terminator may have been the start of that but I think once we got to Trinity in The Matrix, a whole generation had come of age waiting to see girls be on an equal - if not a greater - footing than boys. Now it's usually the guys who are second banana to the female hero - as in Buffy, Tomb Raider, Underworld, Doomsday or Resident Evil.

Unfortunately, the price that's come with that is that female heroes who show some vulnerability - like Clarice Starling - have become all but extinct.

I remember taking a Crime & Mystery Fiction course in college, and our professor had us read The Silence of the Lambs (this was spring of 1990). He then proceeded to tell us that there was a movie being made of the book starring Jodie Foster and Anthony Hopkins.

That's nice, I thought, but there's no way they'll be able to effectively film this subject matter to do the book justice.

Silence is one of my top 25 favorite films of all time, and it was sweet vindication for horror buffs worldwide when, on Oscar night, it swept the top 5 big prizes (picture, director, actor, actress, and screenplay).

Hannibal Lecter is largely either spoofed or treated as a punchline these days, but we can't (and won't) ever forget the impact this film made.

Hey FF, I'm sure it's hard for a younger generation that has seen Hannibal, Red Dragon, and Hannibal Rising to really appreciate Silence on its own merits, and not as part of a horror franchise. Still, as far as I'm concerned, the movie is still the gold standard for contemporary psychological horror.