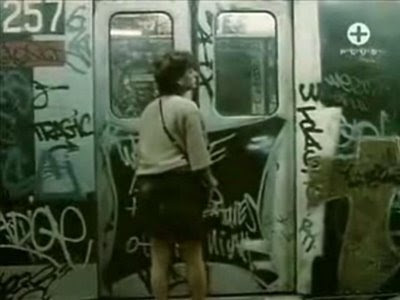 The passing of actor Edward Woodward this week at age 79 naturally prompted me to think of the role I first encountered him in - that of Robert McCall, an ex-member of an unspecified government agency who turned into a virtual one-man army on the streets of New York in the CBS series The Equalizer, which ran for four years from 1985-1989. Woodward was as smooth as they come in the role and, even in his mid-50's at the time, totally convincing as someone who could roll over any opponent.

But besides Woodward himself, what I remember most about The Equalizer is its dramatic opening title sequence. Set to the music of ex-Police drummer Stewart Copeland, this 59 second clip painted a picture of New York as an unsurvivable urban hell, a city completely taken over by criminals. With its shots of scared women peering out from behind chain-locked apartment doors or menaced by thugs in the flickering lights of elevators or on subway platforms, the opening of The Equalizer was as much a part of the 'women-in-peril' subgenre as any '80s slasher movie. All it was missing was an appearance by Maniac's Joe Spinell.


With its image as a city having been turned around over the last two decades, there's a whole generation or two that doesn't instantly think of New York as being a scary, dangerous place but that's the reputation it had in the '70s and '80s. When John Carpenter's Escape from New York was released in 1981, it clicked with audiences because at the time it didn't seem like that much of a stretch that the government would give up on the city and turn it into a criminal colony. During its run, The Equalizer's title sequence made it seem as though that day was just around the corner. It can still make you feel vulnerable, where ever you live.
Posted by Jeff Allard at 5:25 AM

I moved to New York City the year that The Equalizer debuted, and the subways still looked like the one depicted in the main title sequence. The Howard Beach attack, the Preppy Murder Case, the Central Park Jogger case... these were all going on during my tenure in Gotham, which was more or less bracketed on the far end by the events of 9/11 (although I lingered there for 3 more years afterwards). The show gave me a boost during my lonely, dreadfully poor first years as a transplanted New Yorker. And how cool was it that, when Edward Woodward had his heart attack, the producers got Robert Mitchum to sub? Robert fucking Mitchum!

Yeah, I dug this show and used to watch it with my grandfather who was an old school kind of guy who liked Woodward's brand of justice.

I had forgotten just how scary a place NYC is portrayed in this show. And the observation that it almost seems just a little time away from the ESCAPE FROM NY scenario is an apt one!

Arbo, I agree - that was a choice move to have Mitchum fill in for Woodward. The Equalizer was just a one-stop shop for bad assedness! I really have to catch up with it on DVD one of these days.

And J.D., the '80s were a great time for older action heroes - Eastwood and Bronson were handing out hard justice in their '50s and '60s and The Equalizer fit right in with that.

I loved 'The Equalizer' when it was on, and I miss that whole era of the "rotten apple" in a kind of abstract fantasy way. I can't imagine actually wanting to live there, but it's taken on such a mystique I sometimes wish I could go back in time and visit. I probably wouldn't last ten minutes.

Bob, sometimes I feel nostalgic for the mystique of crime-ridden NY, too - as someone who only viewed the city from afar as some kind of fantasy world could. I'm sure anyone who lives there, either then or now, wouldn't feel the same! Thanks to cable TV, as a teenager in the late '80s living in Massachusetts, I used to watch WOR out of NY, which aired the Morton Downey Jr. show weeknights at 9 and then the NY news at 10. Together they gave me an image of NY that jibed with what I saw in NY-set action and exploitation films like Death Wish and Ms. 45 - a city that was gritty, threatening, and constantly spilling over with violence. For the sake of its residents, I'm glad NY isn't such a rough place anymore but I'll always think fondly of the films and TV shows that depicted it as the most dangerous city in the world.

If you haven't seen it already, you should check out the documentary 'NY77: The Coolest Year in Hell'. It basically covers New York at it's absolute nadir. That was the year of Son of Sam, the blackout, and the mayoral election that eventually put Koch in office. It also covers the interesting things going on in the music scenes (disco, punk, and hip-hop), plus a bit on the delightfully sleazy side of Times Square.

Sounds great, Bob - thanks for the heads-up!