Ninja Stars Come Out At Night 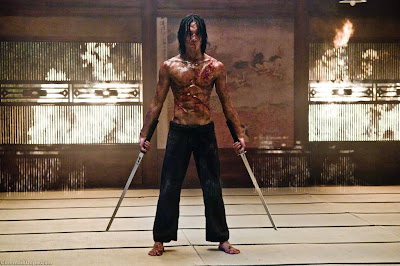 An A-budget, ultra-gory ninja movie seems like an unlikely candidate for a holiday release but yet here we are with Warner Bros.' Ninja Assassin raining a hail of shurikens on Thankgiving weekend audiences. Directed by James McTeigue (V for Vendetta) and written by Matthew Sand and J. Michael Straczynski, Ninja Assassin can't quite be called a throwback to the ninja movies of the '80s - outside of the casting of ninja movie superstar Sho Kosugi (Enter the Ninja, Revenge of the Ninja, and almost any '80s movie with 'ninja' in the title), it isn't aiming for nostalgia - instead this feels more indebted to modern anime and comic books than to the kind of ninja movies that used to have the Cannon Films logo on them. Those with fond memories of growing up on those earlier ninja romps might be put off by Ninja Assassin's dour tone but as ultraviolent entertainment, Ninja Assassin gets the job done.

First-off, following in the gore-soaked footsteps of Rambo and Punisher: War Zone (both 2008), Ninja Assassin proves that the MPAA no longer gives a shit. Seriously, I recently rewatched Friday the 13th Part VIII: Jason Takes Manhattan (1989) and to see what the MPAA wouldn't allow in that film (like, a quick shot of a spear being twisted in someone's gut or something) compared to the explicit, full-on dismemberings and decapitations seen here is to marvel at what an R-rating means today. Ninja Assassin would've be unreleasable in its current form twenty - or even ten - years ago (pics from Ninja Assassin would've gotten GoreZone banned from magazine racks just as quickly as anything from Intruder, I'll tell you that!). Now it's a free for all. No complaints here - but I just wonder when the big turnaround happened. Maybe Hannibal (2001) opened the door and Passion of the Christ (2004) kicked it down.

Whatever the case, Ninja Assassin is far from a dry affair. But besides its gratuitous gore, does Ninja Assassin have much else to offer? Well, no - but the gore IS outstanding. Yes, there's a lot of CGI blood, which I guess still rankles some viewers, but I think it works in the context of the stylized world that McTeigue is going for here. As for the action itself, some may be disappointed that so many fight scenes are staged in dark environments but for me, visibility didn't seem like a major issue. I expect McTeigue just believes that ninjas usually work in the shadows and I have to agree on that point. The Cannon Films always had a lot of brightly lit, daytime fight scenes but, really, that seems incongruous to the methods of the ninja. Also, to see ninjas in bright light is to essentially be watching people jumping around in their pajamas. That might've played just fine in the '80s but dammit, audiences are more sophisticated now!

The story of Ninja Assassin is standard issue all the way - a young orphan raised by a ninja clan grows up to rebel against his sadistic mentor - but as a hook to hang fight scenes on, it works. What's more damaging to the film is that the acting is so bland across the board. Rain, as the ninja clan-defying Raizo, looks perfect for his role and he's totally convincing in the fight scenes but as a charismatic presence - forget it. Naomie Harris is nearly as personality-free as an Interpol agent chasing down rumors of ninjas (I remembered her being much better in 28 Days Later). Ditto for Ben Miles as the boss of Harris' character. Kosugi is fine (and still convincing as a bad-ass) but as his role calls for him to be stoic at all times, he can't add much life to the movie.

With so little human interest to hold our attention, how much one enjoys Ninja Assassin will depend entirely on how much of a ninja action geek they are, and how accepting they are of the style McTeigue has brought to his film. Some might've preferred that McTeigue have gone more old-school in his methods but this is one ninja pajama party that I was happy to attend.
Posted by Jeff Allard at 4:57 AM

Sounds exactly like I would expect Ninja Assassin to be...a fun movie I wanna see for some Ninja action and some bloodshed. Simple enough.

Yeah, that movie looks awesome so who knows? As for Ninja Assassin, I'm definitely in the minority in liking it - I think the CGI bloodshed didn't win it many old-school fans and some found the photography too dark. But I went in with pretty low expectations so that may have helped. It's worth a matinee, at least.

Glad you had more fun with this one than I did. It wasn't the darkness that bothered me so much as it was the super fast editing that seems all the rage these days. I know I'm old school, but when I go to see a movie with guys fighting, I want the camera to stay still so I can see the moves. I feel bad for the stunt men and martial artists who gave their all only to have their efforts go by in the blink of an eye.

You're right on in saying the CGI bloodshed is trying to look like anime. But for me, that just looked all wrong. I can accept ridiculous gouts of animated blood in an animated movie, but in a live action film it's just to distracting. The sort of arterial squib sprays in the Lone Wolf and Cub films and other older Japanese action films are just as unrealistic, but for whatever reason I can accept those more easily.

And you're also right about the MPAA. Apparently just about any kind of violence can squeak past with an 'R' rating now. I think at least part of that is due to the increasingly graphic network TV shows like CSI and Law and Order. If you can see that kind of gore on TV, then how can you justify giving something similar an NC-17 in a movie? OF course sex and nudity still run into trouble, but that's America for you.

It's true - the usual double standard of sex vs. violence still holds in America (and probably always will). But I do have to marvel at how completely permissive towards gore the MPAA has become. With the kind of films that have been granted R's lately, I can't even imagine what they're saying no to anymore.

As a fan of old school martial arts movies I was looking forward to this... but based on your review I think I'll cool my heels for a while longer.
The CGI blood thing does sound annoying... as does the fast editing Bob Ignizio mentions.

I'd probably be happier just watching some of my old favorites and waiting for this to hit the dollar cinema downtown.

This is defintiely not old-school in its methods, Knob - so waiting for the dollar theater sounds like a plan! I was reflecting on the use of CG blood here, actually, and I really think a lot of it comes from the fact that the action goes by at such a breakneck pace that trying to rig everything as a practical effect would've been almost impossible. When you have multiple characters in a shot all being sliced to pieces by a hail of ninja stars at the same time that others are being sliced with swords, how do you accomplish all that by practical means? While I know there's a way, it'd be incredibly time consuming (and cost prohibitive, as well) for shots that pass by in a blink of an eye.

i can't stand the slow motion they used in the trailer, i can't imagine this thing being good

If the slo-mo bothers you, then it's a good bet that the movie probably isn't for you.