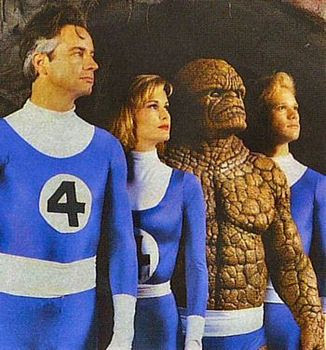 Thanksgiving isn't a day for ordinary, run of the mill turkeys - they've got to be exceptional birds and a cinematic turkey that's got impeccable credentials is the never-to-be-released 1994 adaptation of The Fantastic Four. Produced by (Oscar winner!) Roger Corman at the astonishingly low price of (choke!) $1.98 million, this shady enterprise was never was meant by Corman and Constantin Film to be a theatrical release, it was just a bid to retain the studio's film option rights - although that mercenary goal turned out to be news to FF's hardworking cast and crew, and to a legion of comic fans that were kept waiting for Marvel's First Family to make it to the screen.

I was one of those fans and I followed the progress of this movie avidly. I still have an issue of Film Threat magazine, in fact, with a terrific FF cover story that gave plenty of evidence that, while this wouldn't be top of the line filmmaking, it would be showing plenty of fidelity to the comic. The cast, at least, looked like dead ringers to their four-color counterparts and as this was still in the days before comic adaptations were an industry to itself, any live-action adaptation - especially when it came to Marvel properties as the company was a few years off from getting their act together with 1998's Blade - was welcome.

Having said that, The Fantastic Four is justifiably known as being atrocious. But let's give credit where credit is due - on a budget too small to even have done a proper adaptation of The Punisher, never mind the Fantastic Four, director Oley Sassone did a heroic job of squeezing every dime to its limit. The movie may be shamefully underfunded but the Human Torch (Jay Underwood) does flame on (although he only does a full body flame once, at the climax), The Invisible Woman (Rebecca Staab) does disappear (a budget-friendly effect if there ever was one!), Mr. Fantastic (Alex Hyde-White) lives up to his rubbery reputation (his stretching powers requiring the most ingenuity from the FX department), and The Thing (Michael Bailey Smith) looks every inch like the orange rock-encrusted hero from the comics (this suit is seriously great and must've been where most of the budget went). The chemistry between the cast is strong and from their obvious commitment to the material, you wouldn't think that this was never meant to be a 'real' film.

I fondly remember being in the Springfield, MA, video store that I used to work in when we discovered to our joy that the tape of Carnosaur (Corman's knock-off of Jurassic Park, which managed to beat Spielberg's movie to theaters) had the Fantastic Four trailer on it. A small crowd of staff and customers rewatched that trailer at least five times on the spot and while I don't think any of us believed we'd be seeing that film in a theater, a video release had to be coming - after all, we just saw the preview!

But that was never to happen. Instead, the movie has become a permanent fixture on the bootleg circuit. In years to come, long after after every obscure, out-of-print title has made it onto some legitimate format, The Fantastic Four will still be found at vendors tables at conventions. For a few years after it first started appearing at cons, my friends and I kept searching for better quality dubs than what we had already gotten but after a try or two, it was clear that we already had the best version available. The best that can be said about the condition of the copies I've seen is that they're watchable - although in today's Blu-Ray age, I find that it's far harder for me to suffer through bad VHS dubs (of bad movies, at that!) than it used to be.
For The Fantastic Four, though, it's worth risking a headache every once in awhile. A lot of bad movies have the reputation of being so bad they're hilarious but this is one of the few I think really deserves that reputation. Dr. Doom's exaggerated hand gestures alone (when making his ransom demands he spells out the numbers in the air as he says them!) are gold and I know my life as a movie and comic fan wasn't quite complete until I saw Mr. Fantastic use his limitless ability to stretch his body to trip henchmen with his elongated shin.

If some feel that I've spoken too fondly of this movie and that I haven't savaged this legendary failure as much as it deserves, let's just say I decided long ago to adopt this turkey. Because any movie that ends like this deserves to live forever:

To everyone in North America, have a Happy Thanksgiving!

Thank you for reminding me of this movie. Being a hardcore fan of comics during my youth, I remembering reading about it in Wizard magazine thinking that the superhero movie was on its way back and I was extremely excited. I remember back then talk of an X-Men movie (Danzig was rumored to have been casted as Wolverine at one point). I don't even think FF hit video store shelves.

Nope, it's forever (4-ever?) going to be a bootleg item. Too bad - even though it's lousy, for fans of the comic it has its charms. And I remember that Danzig rumor, by the way - I don't know about his acting skills but looks-wise I thought he would've been perfect!

I felt the same excitement when I first popped my bootleg copy of this into the VCR way back when, excitement that quickly faded to amazement at hope low rent the thing was. I still enjoyed it, though. The recent FF movies had probably 50 times the budget, and for my money aren't nearly as much fun.

As bad as it truly is, I love this damn movie. The costumes couldnt have been more reflective of the actual comics, even if they did look ridiculous in spandex. Dr Doom and The Thing were nothing short of amazing. I could only hope that they did release this at some point, but at least I managed to snatch up a copy of the bootleg at some point. Thanks for the review Jeff!

Carl, glad you share my love for this misguided film! And I agree about the costumes - except that I think Rebecca Staab looks just fine in spandex!

And Bob, it's totally true - the new big budget FF movies just aren't as fun as this one!