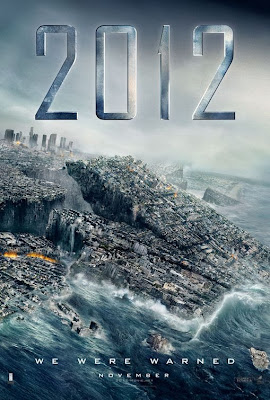 My first memories of being scared in a theater were of watching the trailers for Irwin Allen productions like The Poseidon Adventure (1972) and The Towering Inferno (1974). I don't know which movies my mother and I had gone to see when those previews played but the sight of crowds of people trapped, overwhelmed and facing certain death by either water or flames terrified me. I even felt unnerved a few years later when we saw Superman: The Movie (1978) and I watched the destruction of Krypton play out on the big screen. To see people running for their lives as the ground below them gave way and they plummeted into an endless chasm, falling helplessly into space, was scarier to me than any creature feature I had seen. A monster or an animal can conceivably be reasoned with - or at least be deceived, or defeated. But Nature is devoid of thoughts or feelings. Nature, to me, is not about sunsets and gentle breezes. It's about hundred foot tall waves, raging fires, and enormous upheavals in the earth.

Producer/writer/director Roland Emmerich knows all about what Nature (and what CGI) is capable of. With only one true disaster movie to his credit - 2004's The Day After Tomorrow (Godzilla and Independence Day had plenty of destruction but they were rooted in sci-fi fantasy with their giant monsters and aliens) - he apparently decided that he had been thinking too small with that film and looked to the Mayan calendar for inspiration for 2012. This is the big enchilada of disaster movies. I believe that the book on this genre should be permanently closed now. I guess someone else will try to carry on at some point - maybe even Emmerich himself - but I can't imagine why. Unless all prints of 2012 are mysteriously lost, there is no more need for any further cinematic depictions of disaster - that is unless someone wants to do a disaster movie in 3-D. Maybe that'll be Emmerich's encore after this. Personally, I think he should just move on because trying to top himself at his own game after 2012 looks like a losing proposition to me.

I had expected that 2012 would've gone more into Mayan mumbo-gumbo but the prophecies or what-have-you of the Mayan calendar are given a brief shout-out or two early on and never mentioned again. Apparently there wasn't much material there to work with - but they did have that magic date to offer and Emmerich doesn't let it go to waste. To Emmerich's credit, the characters in 2012 are more personable than they had to be. Smart casting helps, with John Cusack as a novelist and Chiwetel Ejiofor as a scientist being especially good. And I wouldn't have thought that a movie about the end of the world could be such giddy fun but Emmerich has pulled it off. This is the kind of movie where one character says to another "I feel like something's pulling us apart," as a beat later a gigantic crack appears between them in the floor of the supermarket they're standing in. Corny? Sure, but you don't spend the kind of money that was spent on this movie to leave people depressed. 2012 frequently reaches the level of total slapstick farce and boy, those are some good times. I'd hate to spoil the highlights for anyone, so I won't but all I can say is that I'm still chuckling over some of 2012's best bits.

When I told my wife this movie was two hours and forty minutes long, she couldn't believe it. But while it does seem like a movie that by rights ought to be short and sweet, Emmerich finds a way to make 2012 more than just a global smackdown. This catastrophe isn't something that's just sprung on the world's leaders so plans are in place to ensure the survival of the species, giving 2012 a third act that isn't just about people lying around dying. And of course, in classic disaster movie tradition, there's plenty of soap opera level dramatics with characters either rising or falling to the occasion.

Wow, I had absolutely no desire to see this after the absolute turdfest that was 10,000 B.C. Will definitely be giving this a shot now good sir!

Pretty much the same response I had to the movie, Jeff. I've seen (and hated, or at least disliked) most of Emmerich's films, but on this one he seems to have gotten it right.

Yeah, I stayed away from Emmerich for years (although he'll always have a soft spot with me for Universal Soldier) and I'm not automatically going to jump to see what he does next but this was pretty much exactly what it should've been. I don't know if the parts I laughed at the most were supposed to be funny but I can't say that I wasn't entertained.

Thanks! I agree, I was going to avoid this one...but now it is back on the list!!

Hope you enjoy the movie, Frog Queen! I don't want to hype it too much but I think anyone going to see mass destruction will definitely get their money's worth!

I'm glad to see that you reviewed this, Jeff - it gives me fortitude to do the same for the Jar. For me, it's always been something of a hop, skip and a jump away from giant creature movies to disaster flicks. Plus, this sure does seem like the de facto remake of When Worlds Collide.

Yeah, disaster movies have one foot firmly in the genre as far as I'm concerned. You should definitely do a 2012 review, Senski - I'll be looking forward to seeing what you think of it!

You might have to live with the idea of getting sober before 2012 is over, Ivan. But if the trailers had you pumped, I can almost guarantee you'll like the movie - no matter what condition you see it in!

Based on the hype and the previews I've had no desire to see this either... it looks like a whole lot of CGI destruction with a smattering of reaction shots from the actors.
But I do love the old disaster movies of the 70s... especially Earthquake and The Towering Inferno...
... and I've got enough faith in your tastes that I'll probably go along when my dad tries to drag me to this next week.

Well Knob, there IS a whole lot of CGI destruction here. But for what it's worth, it's top of the line CGI destruction. And the dramatics in between are, in my opinion, pulled off with a fair amount of finesse. 2012 never devolves into smug camp, but it doesn't take itself too seriously either.

As a father, Jeff, I'd be interested how they got you to think around that, or not think about that.

I guess the simple answer is that the movie seemed to have so little to do with reality, or even to the real reactions that people might have in such situations (which would involve non-stop shrieking, I'm guessing), that it didn't feel as gut-wrenching as the deaths of millions upon millions of people ought to.

Disaster movies are kind of odd to begin with in that they invite the audience to regard events that cause mass death and destruction as entertainment and 2012 is all that times a hundred.

Being a father, there is a lot of stuff I no longer feel comfortable watching - even most of the crime shows on TV. But it's more that kind of real-world, every day scariness and suffering that affects me. When I see John Cusack and his onscreen daughter in an RV riding full-tilt away from a sky raining fireballs, it's on the level of a cartoon. It might be a lousy idea of fun for a lot of people but I was able to go along with it.

There's probably something to be said, or studied, about how people are instinctively, unthinkingly selective about what kind of images of pain and suffering in movies upsets them and what doesn't. You'd think the right answer should be that all depictions of pain and suffering should bother us all the same but yet they don't. And it's not about the violence being explict or not but our reactions to the context of and the circumstances around the violence. I don't know - it's the subject for another blog, I guess.

When I see John Cusack and his onscreen daughter in an RV riding full-tilt away from a sky raining fireballs, it's on the level of a cartoon.

Sure, it's like an Indiana Jones bit. But it seems to me to be an all together different effect to have the girl look out of an airplane window and watch her neighborhood buckle and collapse and all those houses disappear into the abyss. Having just turned in the third draft of a screenplay where great care was taken to make sure responses were actually recognizably human, I just wonder if anybody second guessed this bit, in which you are really brought face-to-face (albeit at the distance of a thousand feet or so) with the destruction not of a national landmark or a natural wonder but a neighborhood, a community, somebody's home.

Arbo, I have to think that if anyone involved in 2012 was concerned with making the reactions recognizably human, then the movie wouldn't have gotten made - or at least not on the scale that it was. So much death is rushing past you in any one scene in 2012 (in the film, if I'm remembering right, what the little girl is watching out the plane window is not her neighborhood vanishing but the entire West Coast disappearing into the ocean) that it's incalcuable to consider.

The characters and emotions are all on the level of a soap opera or TV drama. They may be watching the world in it's death throes but Cusack's kids show more concern about whether Cusack gets along with their mom's new boyfriend. There's not a single mention of "hey, you think grandma and grandpa are ok?" or "what happened to all our friends?" and I bet neither Emmerich, nor anyone else involved with the film, ever second guessed that decision. There's moments of remorse, regret and sacrifice here and there but if this was played real, it'd be unbearable. The brief dream sequence in T2 where Linda Hamilton sees the world annhilated by nuclear bombs is more traumatic than anything in 2012. It might be morally wrong - or just artistically lazy - to turn the end of the world into a theme park ride but that's what Emmerich and co. have done.

Well, I don't think morality comes into it. I always think it's interesting (and sometimes disturbing) to see where certain logical disconnects occur in stuff like this. I'll probably check it out on DVD. Thanks for playing!

Ha, I can't believe you even watched it! I have to say I feel like a dumb-ass for enjoying such lousy movies but I just can't help myself.