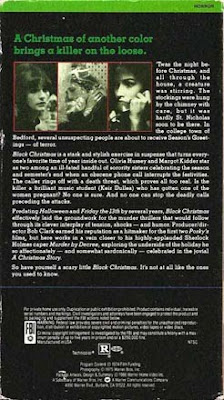 Bob Clark's seminal slasher, Black Christmas (1974), is a film that I've only owned on VHS - a fact that I'm reminded of every year as I prepare to watch it again come Christmas time and realize that I still haven't upgraded this classic to DVD. While I haven't rewatched the film yet this season, in taking out the tape today I was reminded of the main reason I love old VHS tapes so much - the descriptive text on the back covers. Up through the mid-'80s, a surprising amount of care and attention was given to what was written on video boxes.

Somewhere along the line, companies started to simplify what was written about their films, reducing word count and usually limiting back cover descriptions to a terse plot description and a vacuous critical blurb. But in the early days of VHS, there was an art to writing the copy that accompanied these tapes. I don't know if they were done in-house at the respective studios or whether the assignments were farmed out to freelance writers but whoever was responsible for penning the text for the backs of these tape sleeves (at least those done for studio releases) showed an effort to write in an interesting fashion and to say something informative as well.

In the pic above, it's impossible to read the print but let me quote from it:
"Black Christmas is a stark and stylish exercise in suspense that turns everyone's favorite time of year inside out. Olivia Hussey and Margot Kidder star as two among an ill-fated handful of sorority sisters celebrating the season and semester's end when an obscene phone call interrupts the festivities. The caller rings off with a death threat, which proves all too real. Is the killer a brilliant music student (Keir Dullea) who has gotten one of the women pregnant? No one is sure. And no one can stop the deadly calls preceding the attacks.
Predating Halloween and Friday the 13th by several years, Black Christmas effectively laid the groundwork for the murder thrillers that would follow through its clever interplay of tension, shocks - and humor. Producer/director Bob Clark earned his reputation as a hitmaker for the first two Porky's films, but here works in a vein closer to his highly-applauded Sherlock Holmes caper Murder By Decree, exploring the underside of the holiday he so affectionately - and somewhat sardonically - celebrated in the jovial A Christmas Story.
So have yourself a scary little Black Christmas. It's not at all like the ones you used to know."
That's a nicely done write-up - nothing Pulitzer-worthy, but indicative of the kind of lively, informed text that could be commonly found on VHS tapes back then. Today, when it comes to DVDs it's completely bare bones but in the early days of VHS, it's clear that they got real writers and real film fans on board to help guide prospective viewers. It might be a silly thing to fixate on but when I read the backs of these old boxes, I think it's touching in a way to realize that as this new industry of home entertainment was taking off, that customers were assumed to be real film buffs - or at least film buffs in the making - and that any film released on this new format deserved to have something substantial said about it.
Of course, this was all years before the days of DVDs loaded with special features. Back then, the back cover text was the special feature. And while it was all the service of moving product, looking back I realize that these back covers were (sadly) some of the first instances where I read about modern horror movies in a context that was scholarly and appreciative rather than condescending.

So to those uncredited writers who contributed their efforts to the early days of VHS, I say 'thanks.' You all had a way with words.
Posted by Jeff Allard at 9:05 PM

1) The sparseness of info on plot, leaving most of the surprises to be discovered...

2) The application of Auteur Theory, by knitting together Clark's output, and demonstrating how this fits within...

3) The lack of overt hype (there's a great subtext of, "Aren't movies just so interesting?")...

There are many sites that preserve the cover art of vhs releases, but you've just identified a new Interweb need, Jeff. And thanks for going to the trouble of a word count!

No problem, Senski - although I should point out that the word count includes an opening paragraph which I didn't reprint in the blog.

I totally agree with your analysis of this BC write-up - it shows a sense of craft that you just don't see anymore, except perhaps when Anchor Bay or whoever might re-release an old cult favorite. And more than the writing itself is the attitude.

A passion for movies is conveyed here - not in a heavy-handed or gushing manner, but in intelligently noting the qualities that make BC special and in putting it in the context of Clark's other work. If someone didn't know anything about BC (or Clark) beforehand, they would've learned a little something from this and I think that's cool.

I like it, too. Too many times, these days and in the past, someone who didn't give a rat's ass for the flick would be the one designing the blurb and even writing it. And the 'blandness' of it shows.

But there are gems like this, written by the right person, someone who gets the film.

Haven't seen this one this year. Hope to, but unsure if I will be able to. Love it, though!

When I was in college I worked at a video store and I remember poring over those VHS box descriptions.
There's something evocative for me now in seeing that big block of text with no pictures... takes me back to when the majority of films, and film history, was a great new territory I was discovering.

Excellent post. So many times am I duped with not enough info on the back of a DVD box. Instead, relying on quotes from writers or publications no one has ever heard of (I have yet to validate their existence but my hypothesis is that they don't). And I'm also a sucker for those little leaf seal logos that proclaim they premiered at such and such film fest. They HAVE to be good to get into a film fest, right? Not so. Not so indeed.

Wings, Knob, PoT - thanks for the comments! Glad I could spread a little Black Christmas cheer!

What a great Christmas movie! One of my favorites, right along with Gremlins.

The new book,"Portable Grindhouse", is something that would be of interest to you. It's about the lost art form of the VHS box. I miss VHS art!

these were very well written. Thankis for bringing thiso ne to light.

CB, I'll give Portable Grindhouse a look - thanks for the heads-up!

And Phantom, my pleasure - glad you enjoyed it!

Ugh how terrible are the DVD synopsis? Let alone the terrible rash of cover art recently with the advent of Photoshop.. VHS forced the indie Horror filmmakers to be creative as hell, and I miss the days when a movie could be sold on the cover and description alone..

The description is better than any review I have ever written!

I've been on the road for close to three weeks straight and been reading all of these BC reviews. Can't wait to get home and continue my tradition of watching it around the holidays. Probably one of the first things I do when I get home.