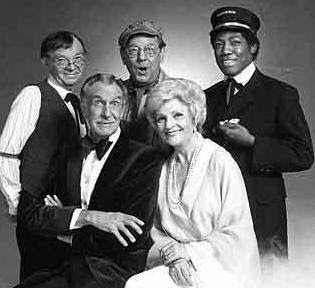 In 1979, a fantasy series called Time Express aired four episodes before its own time suddenly ran out. With its hour-long format containing multiple storylines in which passengers aboard a supernatural train found themselves transported backwards in time in order to alter events in their past (hopefully for the better), Time Express was an obvious bid on the part of CBS to replicate the appeal of ABC's hit series Fantasy Island. The same magic didn't happen for Time Express, however, despite the presence of Vincent Price as Jason Winters, a host aboard the train meant to counsel guests on their journeys (Price co-starred with his real-life wife, Coral Browne, who played Jason's co-host, Margaret Winters).

After thirty years, it's not surprising that I don't remember any specific details of the four episodes that compromised the entire run of Time Express. But in thinking back on this show, and of the many other short-lived series during my childhood and adolescence that lasted a few weeks or months before disappearing, I realized that the kind of nostalgia I feel for these shows is something that won't be part of the adult lives of younger fans growing up today. Thanks to the release of every new TV program on DVD, even short-lived series can be a part of their fan's home library. Had that been the case in the late '70s, early '80s, I'd be the satisfied owner of complete sets of Automan, The Phoenix, The Powers of Matthew Star, and Manimal, among others. Today, the cancellation of shows like Dollhouse may be a disappointment to their dedicated viewers but at least fans know that within weeks of their favorite show going off the air, they can own the series and maybe even see a few extra, unaired episodes in the bargain.
If I never experienced the prolonged, and potentially permanent, absences of the series I loved as a kid, would I still feel the same way about them? Much of my lasting affection for all these shows that quickly came and went is undoubtedly based on the fact that I saw them at an early age and, in most cases, never saw them since (save for a few Sci-Fi Channel airings in the '90s). The current generation, though - and those after them - will never know what it is to not be able to relive their childhoods any time they please and I can't help wondering how that will affect their emotional relationships to the shows and movies that they're growing up on.
Up until this generation, a desire to recover the touchstones of childhood has been a large component of the fan mentality. Look at the euphoric reaction among Gen-Xers when it was announced that Fred Dekker's Monster Squad and Night of the Creeps would finally see a release on DVD. Even the most culty of cult movies today gets a special edition DVD right off the bat.
Fans - understandably - now take the availability of everything for granted. Nothing is lost. But maybe until you know what it is to miss something, you can't really appreciate it. And maybe some things have to be lost before they can become valuable.

Never even knew about this show until now, how cool. Sounds like something I would have watched.

And you are right about the instant-availability of everything. I have waiting 20 years for "Friday the 13th: The Series" to appear on DVD, and finally got my wish over the past year. But there are so many other things still lost. Like real DVD release of The Six-Million Dollar Man and Bionic Woman!

It is a totally different world, that's for sure.

Yeah, it definitely is. And I'm with you on wondering where the hell Six Million Dollar Man is on DVD - that show was huge!

This is a good topic Jeff. First I would like to say that about 13 years ago, I actually saw 2 eps of this program on a local cable station late at night that showed a great deal of odd pieces of entertainment like the film "Didn't You Hear?". Never thought much about those eps again until I read your post.

As for the interesting topic - for example, I waited so long for Werewolf to finally get its recent DVD release as well as the original BSG and Buck Rogers a few years back. People in a newer generation will never know what it is like to wait and pray for their shows' releases that may or may never come. The fans of older shows have their release hopes solely in the hands of these bigger companies who decide whether they should release certain series if there is a certain financial return guaranteed. That is why I figure that I will never get a release of the Something is Out There mini-series and full series. Not a big demand there, but you can get DVD box sets of every series s****y or not for current programs.

Thanks Geof! I might come back to this topic and expand on it a little more at some point. At the moment, I'm feeling the holiday crunch so blogging is on the back burner for now.

It's interesting to think about what that lack of immediacy to our childhood entertainments has done to separate our outlook from that of younger folks.
Maybe newer generations will be a bit less likely to gild the past when it's all right there, ready for the viewing... "oh, look, the 'good old days were actually kind of crummy!"

Still, it's a sad kind of romance that they won't get to know... like the weird thrill I get when I hear the old ABC Movie Of The Week theme music... that I always associate with creepish stuff like 'When Michael Calls' and 'The Screaming Woman'.