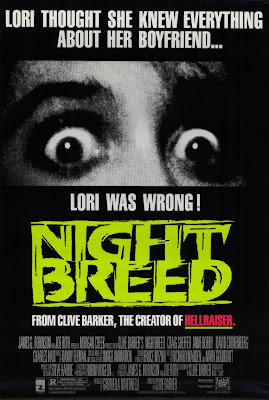 In Clive Barker's Nightbreed (1990) there are many monsters that call the underground city of Midian their home. There's the porcupine chick, the blue devil guy who sports a snazzy, spangly jacket, and the fat dude with snakes that come out of his belly - no two look alike. But one among their ranks stands out as a show business legend - the moon-faced man-monster known as 'Mac Tonight.' 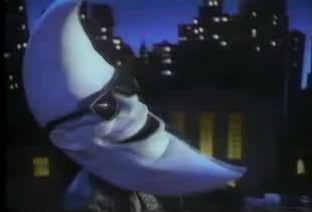 Appearing in a series of late '80s McDonald's ads meant to promote the restaurant chain's new late night hours, the crescent-chinned crooner (played in all but two of the 29 Mac Tonight commercials by creature actor extraordinaire, Doug Jones) was known for riding a piano in the clouds. But on investigation, it can be verified that Mac is indeed a Midian resident. Look to the far left of this pic: 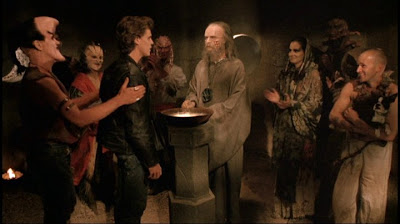 And here's his unmistakable lunar profile again, as seen in the top left of this illustration: 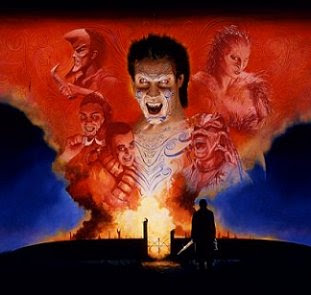 Mac Tonight? More like Midian Tonight! If only some Nightbreed Happy Meals had come out of this!

Mac Tonight, the Tribes of the Moon embrace you!

Typing out LOL's and HA's are not good enough for this post!

Matt, I had a feeling you'd get a kick out of this one! Glad you liked it!

Thats awesome, I completely forgot about Mac lol.. What was more alarming to me in this post was how terrible and confusing that poster was that you included at the beginning. I would have thought it was for WHEN A STRANGER CALLS

You know, I'm not the biggest fan of Nightbreed, but I'm hard-pressed to think of a film with a worse, more misleading poster. I mean, is Lori's boyfriend a serial killer? Gay? Jewish? A gay Jewish serial killer? (That Jewish angle only works if Lori is a nice Catholic girl who doesn't know about, uh, things.)

I kinda like Nightbreed... maybe for it's failed potential (a habit of mine)... but for all the times I've seen it it's never occurred to me that that one guy has a moon-head!
I just thought of him as 'pointy-faced guy'... but you're right... total moon-head!

And Knob, glad to help you see a new side to the 'Breed!

Mac Tonight? What a missed opportunity of cross-promotion! heh.

I kinda dig NIGHTBREED too. It has its flaws but also a lot going for it. I really hope that Barker gets a chance to assemble his director's cut now that all the materials have been discovered.

Sadly it doesn't look good for a Nightbreed Director's Cut. I think studio politics are going to keep that dream unrealized for a long time to come, maybe forever. I like the film, too, though. It's a very flawed movie but it's hard not to feel some affection for a movie that delivers so many cool creatures - and all with old-school prosthetic make-up to boot!

Oh yeah, you gotta give it up for old school prosthetic makeup! Plus, a genuinely David Cronenberg as a psychiatrist/serial killer!