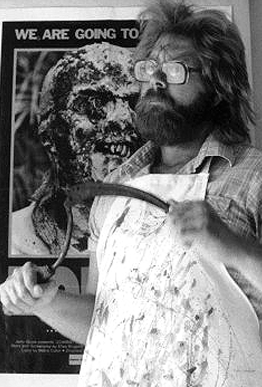 I believe it's impossible for today's internet generation to truly understand the seismic impact that Chas. Balun had on the horror genre. In an age where there's so much instant communication between fans and where genre reviews have proliferated online, it's hard to convey the singular place that Balun's maverick writing was able to occupy in the '80s. Sure, there was FANGORIA and other genre mags, but those magazine rarely, if ever, offered real opinions. They were journalistic entities, dedicated to reporting on the latest horror films in production. And as far as books of film criticism went, what few books that were devoted to the horror genre were typically concerned with 'classic' horror films and what little attention the newer crop of genre pics received was usually negative - with perhaps some grudging admiration expressed for the likes of George Romero. But Chas. Balun changed all that.

A fan so enthusiastic about discussing the often-unacknowledged films he loved, Balun self-published his first book of reviews, The Connoisseur's Guide to the Contemporary Horror Film, in 1983. This was no slick publication, it was proudly handmade - with illustrations by Balun himself.

In a time before the internet and blogs, Balun's writing was a galvanizing influence on a generation of '80s gorehounds. Balun eventually started publishing his work through Fantaco Books but the handmade aesthetic always shone through. Every book with his name on it (as well as the issues of his magazine Deep Red) was always a one-of-a-kind adventure, guiding eager horror aficionados through the wild 'n wooly frontier of splatter cinema. Balun made splatter legit in a way that no one had done before (he even coined the immortal term "chunkblower") but the greatest gift Balun gave his readers was to write with such unbridled good humor and enthusiasm. Yes, he could be caustic when the occasion called for it (and it often did) but his down-to-earth approach was proof positive that wallowing in the wettest gorefests wouldn't warp you. Hell, if anything it seemed to make you a happier, more life-loving person!

In a heyday that stretched for many years (and that reached its peak during his tenure as a columist for Fango's sister publication, GoreZone), Balun was to splatter cinema what critic Lester Bangs was to rock and roll. As indispensable to the scrappy spirit of the splatter age as the films he wrote about, Balun was all about the unfettered fun to be found in slime-spewing aliens, fire-breathing cockroaches, tit-torturing cannibals, and Fulci - always Fulci.

Gone now, at age 61, after a long - and I'm sure incredibly valiant - battle with cancer, it's no exaggeration to say that Balun changed the lives of a generation of horror fans. I never had the pleasure of meeting Chas. but he was a larger than life hero to me. My thoughts go out to his friends and family.
Posted by Jeff Allard at 11:00 PM

Wow! What a great post. I just cleaned out my basement and was going to recycle my GoreZone magazines......what was I thinking! I learned a lesson in writing off what I thought was "silly" in my life. Although my Halloween display has no gore, it is not because I don't love it...it is a choice for that part of my life. But in my heart I respect the whole genre...everything has its place.

Wow, he will be missed. Gotta go email my brother, he and I need to chat over a beer or three :D...I wish he was writing this, his post would be so much more eloquent than mine. :)

Thanks for sharing!! Makes all my silly posts today seem just that.....really, thank you. :)

Great obit. He was an extremely important figure of the genre.

The whippersnappers won't quite understand what a massive labor it was to self-publish in those days (something you sure know about, Jeff). Balun's writing helped this Famous Monsters boy transition to a new and bloodier era - he was so giddy with joy over the subject, how could you not be caught up in it? I wish you hadn't the cause to write this tribute, but I'm glad you did, Jeff.

Man, the end of this year is just being brutal to us...

Frog Queen, your post was perfectly eloquent! And don't ever let go of those GoreZones!

Wostry, thanks - Chas. was definitely a giant.

And Senski, I do have experience with self-publishing and that was directly inspired by Chas.' example. I didn't always agree with his opinions - in fact, the lead article in the second issue of my long-ago fanzine was an exhaustive critique of Chas.' 1993 book Bled To Death: Horror Eats Itself - but even at his crankiest and most contrary, he always held that stature of a beloved uncle. His impact on Gen-X horror fans really is inestimable. Of all the tragic losses of genre figures in 2009, this one has hit me the hardest.

For a much more personal rememberance of Chas. Balun, please read artst (and Deep Red and GoreZone contributor) Steve Bissette's tribute to his friend:

Wish I'd heard of this sooner. What a loss. I loved his critical piece "I Spit in Your Face: Films That Bite" in the Splatterpunks anthology. Long before I was ever able to see movies like Cannibal Holocaust, Beyond the Darkness, Combat Shock, or House by the Cemetery (and long, LONG before the internet made these movies merely a keystroke away), Balun's writings about them stoked my imagination.

Hi I started a blog as a tribute to Deep Red Magazine and the VHS catalog check it out! http://www.theaterofguts.com/