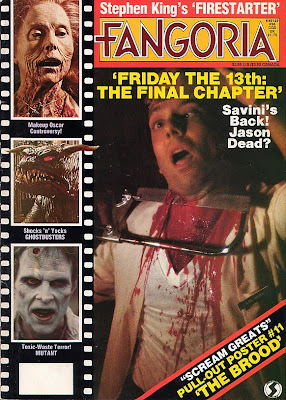 Since 1979, FANGORIA magazine has been the premiere horror publication in the world. It's the only horror mag to have name recognition outside of the horror community (it's even been referenced on The Simpsons, surely a sign of pop culture immortality). Currently, though, it's future seems to be in doubt. It's website has been troubled for some time but as of this writing, it's been weeks since it's been active. An old version of the site popped up briefly and then was pulled. So what's the fate of Fango? And more importantly, should horror fans care about this aging icon?

The first question is one that no one except those in Fango's inner circle can answer but on that second question I'll answer with an emphatic 'yes!' - there's just no upside to Fango vanishing. These days, the news of any magazine fading from the scene is usually greeted by a chorus of "yeah, print is dead" but while it's convenient to get news online, it's no replacement for an actual physical entity. That may be a romantic, nostalgic notion on my part but I'll hold to it. Finding news on a website is no comparison to opening up a new issue of a trusted magazine.

With all the speculation about Fango's fate, hopefully news will come out of their camp soon. And hopefully it'll be news of the rebirth of the magazine that has served the genre well for over thirty years.
Posted by Jeff Allard at 6:40 AM

I hope 'Fangoria' all the current horror mags find ways to survive in a world of free, on-line genre coverage.

Foe me, there is still nothing like a hard copy of a magazine for doing this.

Yes, 'Fango' does cover a broad range of work, and much of it turns out to be crap, but that's not their fault.

To find 'Twilight' and 'Antichrist' in the same issue is proof that the mag is relevant.

I don't mind paying for horror mags; paying maintains their value. Not paying for on-line content has contributed to a culture of media entitlement that, ultimately, will bring on the demise of legitimate, printed sources of information and entertainment.

Personally, I'm not that interested in the bulk of films 'Fangoria' covers, but that in no way makes the mag less important to me. For decades now they have covered film, video, and horror in literature. You don't need a battery or power socket to read it, and you don't get sore eyes arrowing up and down through the content.

If 'Fangoria' can find a way to survive, I wish them well. Their very existence (and mainstream awareness) legitimizes a genre that has been maligned for so long. It's one of the most important reasons why the mag should continue to exist. If studios and investors see horror as relevant, they'll continue to invest in it. And, yes, much of what will get made will be crap, but there will be works of exceptional quality, too.

A strong mainstream makes for a stronger underground, too. It all trickles down.

I agree, Phantom. Although fans may not always care for how Hollywood handles horror, it's when the genre is no longer commercially viable in the eyes of the studios that fans should really worry. Because of the popularity of a big hit like Twilight, a number of other - potentially more interesting projects - may push ahead.

As for the extent of Fango's current troubles, I should note that so far as we know they're limited to their website. It's if the next issue due out doesn't hit the stands that fans will really have cause for concern.

Great article. I agree with a lot of this. I remember in the early 90s when horror was extremely slim and they had all kinds of stuff on their covers. Yeah, I don't think Jurassic Park is really "horror" but I enjoyed the mag nonetheless.

However, I'm part of the problem. I definitely prefer magazines to online reading, but money is an issue for me and I've had to give up most magazines. I buy Video Watchdog and Horror Hound from time to time, but otherwise, I simply can't afford the steep cover prices. I do hope that is a temporary sitch and that I can go back to supporting magazines in the future...

I also like what you said about the journalism that goes on in Fango. I know of a lot of "outside" writers (i.e. those that haven't been able to crack the print market)who complain about that form of writing, but most journalism isn't opinionated and it's entertainment journalism, so it's supposed to be upbeat, picking up the fun and more interesting aspects of all films, even when they're not good (and let's face it, most print journalists do on-set interviews and coverage. How are they to know if a movie is good or not if it's not finished?)... Plus, when you're paid to write, you can't use words like "Suck," "Rules," and "Rocks" all the time. I love a lot of online writing, but the freedom of it kind of screws up the really good stuff...

Yes, there's a discipline and a regard for standards in professional writing that people writing online seldom follow (although I find that the better bloggers do, or at least try). While anyone can log online and indulge in any kind of tirade they want, writers for magazines and newspapers and so on have to follow the codes of their profession. The fact that most set visit reports are seldom, if ever, critical is due to the fact that most people in the midst of working on a movie aren't likely to trash it to a reporter. But just because the people involved in making a movie are out to put a positive spin on their project doesn't mean a reporter can't find interesting, worthwhile information.

Unfortunately, some people seem to think that only negative opinions can be considered to be honest.

There's nothing I could add that you didn't say in this post, except that I agree with you 100%, Jeff. Why wouldn't Fango cover everything going on in horror films? That's what they are there to do and to just shun something like Twilight (as many fans would want) would be an act of incredible film fan snobbery, something that doesn't belong in a magazine and frankly, would be immature.

I hope Fango doesn't fade away... admittedly, I have bought a new issue in a while, only because it is not as readily available for me as it once was, but when I do see one, I will certainly pick up a copy. It's a very important part of horror culture and was a huge gateway and guidance tool for me and many others as budding horror fans.

Personally, I can't imagine what growing up as a horror fan in the '80s (and through the horror-lite '90s) would've been like without Fango as a perpetual cheerleader for the genre and I still look forward to every issue. Here's hoping that the magazine can get its business in order and ride the tide of a difficult market.

I also agree a 100% with your very well-written post. Wow! It is THAT kind of passionate writing that FANGORIA should have within its pages. The same problem that plagues it is the same one that sunk the print versions of both STARLOG and CINEFANTASTIQUE - magazines that I grew up with and cherished over the years but have fallen in decline in the last ten or so.

Once the internet became pervasive and all sorts of news sites popped up, both STARLOG and CINEFANTASTIQUE failed to compete with pretty shoddy websites. To be competitive they have to create an online presence that will draw in people with a good mix of style and substance. I think that this is what FANGORIA needs to do also.

I feel like when I posted my rumors and speculation on Tuesday I opened up Pandora's Box.

I just wanted to bring up something that was a little odd, not report that Fangoria was dead.

But alas the floodgates have opened. There a mainstream horror magazine and they should cover things that are popular at the moment.

Though I agree, some journalistic integrity is needed and a few former Fangoria staff are spilling the beans about what the hell was going on over there the last few months (I've updated my original post with a few more links, including one to this here post!)

J.D., Fango could've made themselves into a competitive presence online early on before sites like Bloody Disgusting, Dread Central, and Shock Till You Drop got a foothold but clearly they just didn't either have the resources or the foresight to go that way so their site has been floundering from the start. They came to the game late and so far haven't really learned how to play.

And Jaded, 'Pandora's Box' is right! Thanks for linking to my piece - and more importantly, thanks for providing the link to J.Zahn's scathing rant. That's some eye-opening shit! Even if only 10% of what he said is true (and I'm guessing it's closer to 100%), it's depressing to hear. Zahn's portrait of a great brand being run into the ground by pettiness and ego is just sad.

Back in the day, these kind of ugly behind-the-scene battles were easy covered up but now with the internet, not so much. It's ironic that as the internet proved to be more of a threat to Fango's livelihood than they were willing to acknowledge, it will also be the internet that will shed light on aspects of its operation that its management would prefer to keep hidden.

I went to the Fangoria web site today and found a little picture but no content. That was the first time I'd been there in months, Fango wasn't a must stop web destination. I felt the magazine was much better and the site didn't represent the spirit of the magazine. Plus the last version of the site I saw was confusing and was more about music and other things. If they can translate the magazine's look and feel to the web they might be able to survive. I agree that they need to go back to the classic look for the covers. They need to stand out again, not fade into the background of a sea of film magazines.

Ormsby, I agree - Fango needs to reconnect with their audience in a big way. And as far as their site goes, it was never great to start with and got steadily worse. Who knows what it'll look like when and if it returns.

Superb analysis of what Fango SHOULD be doing to maintain its relevance. I only hope its not too late.

I hope so too!

Great stuff all around, both in your article and these comments. Over the summer, I stumbled upon a yard sale selling old issues of Fangoria for $1 each and wow, what great reading they were! It was so wonderfully nostalgic to read interviews with everyone from Tom Cruise (re: Interview With a Vampire) to Wes Craven (re: Vampire In Brooklyn!).

I haven't read Fango in years, but I recently purchased a subscription a few months back when they were doing a big discount. It's certainly disheartening to hear all the negativity (and not just cause that 's my $54 on the line) but I'm hoping like the pollyana I am that all this publicity forces the mag to up its game. In an age where there are dozens of intelligent and talented writers toiling away on blogs about horror movies, there's almost no excuse for the industry's most famous publication to rest on its laurels.