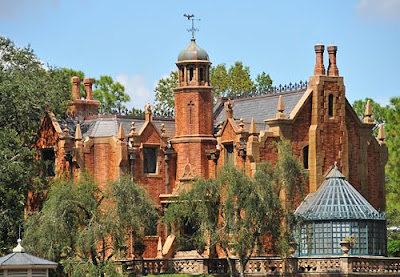 They say that art has the power to heal and in the case of the just-announced Guillermo del Toro written and produced (and possibly directed) feature film version of the classic Disney attraction The Haunted Mansion, I hope that'll prove to be true. You see, I need del Toro's big screen Haunted Mansion to mend a bigtime trauma from my childhood in a way that Eddie Murphy's misguided 2003 Haunted Mansion adaptation could never have accomplished.

Back in the far-flung past, my newly remarried mother and my stepfather planned a family trip to Disney World as their honeymoon. We were going to drive from Massachusetts to Florida, hauling our trailer and stay in the Fort Wilderness campground at Disney World for a week full of Magic Kingdom enchantment. This was before Disney World expanded into all the Epcot Center stuff and the Universal Theme Park and whatever else they've got going on these days. But even with "just" the Magic Kingdom to look forward to, I was damn excited.

The one attraction that I wanted to see, the one ride that was going to make this trip unforgettable for me, was (surprise!) The Haunted Mansion. Even before any plans for us to go to Disney were hatched, I knew all about The Haunted Mansion. I had a book about it, a kid's illustrated book, that I used to read over and over. I would search for any kind of pictures about the actual attraction in books about Disney World. I was a Haunted Mansion junkie.

For the months leading up to the trip, being in The Haunted Mansion was nearly all I thought about. It was damn sure all I thought about during the long, two-day drive down to Florida. When we finally got to Disney World, it was agony waiting to get our trailer situated and to get over to the Magic Kingdom itself. I was done with waiting by this time - done with it!

Once we were through the gates of the Magic Kingdom, I dragged my mom and stepdad past whatever attractions were between me and The Haunted Mansion. The spinning teacups, Space Mountain, Mr. Toad's Wild Ride - all of that second rate shit could wait. As we got to the Liberty Square area, I could see the Mansion. It was finally right in front of me. But oddly, there didn't seem to be any line to get in. Hey, fine by me - I wasn't in the mood to stand around. But as we got closer, there was a sign on a post near the Mansion informing visitors that this attraction would be closed for renovation for the next two weeks. I repeat: CLOSED. FOR THE NEXT TWO WEEKS.

On reading those words, I literally dropped to my knees and cried out "NOOOOOO!!" My childhood had its share of let downs but Dear God, what a blow this was. The wind was completely knocked out of me. For all I cared, we could've driven back to Massachusetts right then. After that intial shock, I rallied and managed to have a reasonably good - sometimes great - time over the next seven days. I was, after all, a kid in Disney World. But for the rest of our stay, every time that I walked past that closed Mansion, it was like seeing the ghost of what might've been.

So while some might find the notion of del Toro tackling a Haunted Mansion movie as being beneath his prodigious talent level, I'm all for it. I never returned to Disney World since that trip thirty years ago and although I'd love to do so sometime - especially now that I'm married with a young son - the chances are slim that it'll happen. At least not anytime soon. So the thought of a truly outstanding Haunted Mansion movie - and in 3-D? - now that I can get behind.

Maybe I shouldn't get my hopes up too much. The last time I looked forward to The Haunted Mansion, it didn't work out so well. I can't help it, though - the kid in me is still dying to get into that ride.

News of Del Toro's involvement with a 're-boot' or whatever you want to call it has me really excited.

Growing up in Southern California, I've been to Disneyland (the original, represent!) many a times. My earliest childhood memory was having the bejesus scared out of me by many of the experiences while in the mansion: the elevator down to the basement, the ride through the graveyard, and the passenger who hitches a ride with you on the way out.

Needless to say, I think you've inspired me to do my own post. God that ride scared the crap out of me when I was a kid along with the Twilight Zone Tower of Terror at MGM studios in Florida.

PoT, I envy your childhood proximity to the wonderful world of Disney! Maybe one of these days, I'll finally get to visit the real Haunted Mansion but in the meantime, del Toro's film will have to do!

Oh my, that is one of the saddest stories I have ever heard. I was reading along and hoping and praying that the tale was not going where it did....when I read your word, I imagined myself in the same place and felt your pain.

I imagine that kind of scarring lasts your whole life. I can think of nothing worse....oh you poor thing!

The world is a cruel, cruel place.

Thanks Frog Queen! The world can be a cruel place indeed! When I think of that memory now, all I can imagine is Nelson from The Simpsons pointing and saying "Ha Ha!"

I remember my brother and I listening to the Haunted Mansion LP as kids and wishing we could go to the real thing in southern California. It was not until I was nearly 40 that I got to go. Now I'm yearning to get back after several years. After the disappointment of the Eddie Murphy film, let's hope that del Toro does his usual gifted best at producing a more satisfying film this time around. And here's to hoping that Buena Vista turns in a satisfying live-action Gargoyles film unrelated to their 90s cartoon.

I'm all for a cool gargoyles movie - although I have to say I remember the '90s cartoon as being above average. Having Keith David as the voice of the head of the gargoyles certainly didn't hurt!

Check it out Jeff. Let me know what you think: http://www.planetofterror.com/2010/07/haunted-mansion.html

Great (sad) story!
We went to Disneyland a lot as a kid but I was always a nervous wreck the night before because my pessimistic nature convinced me that all the best rides would be closed or the lines would be too long or some other disaster that would suck all the fun out.
Your story is like one of those nightmares come horribly true.

It would be great to finally get to experience it with a newly minted horror fan of your own.

Knob, I agree - I've been wondering what the first horror movie I'd take Owen to the movies to see would be and I think we've got a winner here!