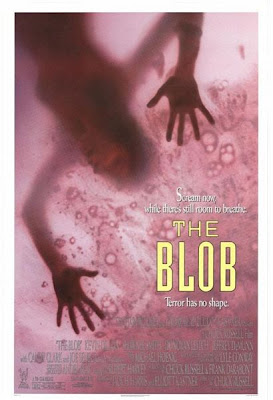 To watch the 1988 remake of The Blob today is to be newly annoyed by its belly flop in theaters over twenty years ago. Man, they pulled out all the stops with this movie but yet audiences just didn't show up. Quality-wise, this movie doesn't need to hide behind any of the usual excuses of "it's good for a cheesy horror movie". No, it's just good, period. It's a genre film, simply out to entertain but it's well-written, well-acted, well-directed, and doesn't look down its nose at the audience. It's shocking how seldom all that comes together, even in the most prestigious productions. And yet you get the feeling that no one involved with The Blob thought they owed anything less than their best work. The result is an absolute top of the line movie about a flesh eating blob from outer space. I have a lot of affection for the 1958 original but this is clearly the superior film in every way. And while Rob Bottin's work on The Thing is forever getting (deserved) props, I think Tony Gardner's fabulous Blob FX don't get nearly enough acclaim.

To read my full Summer Shocks review click here.
By the way, I saw Predators and liked it but I'm waiting to see it a second time before writing a review. I want to be sure that it really is good and that I wasn't just cutting it slack for not sucking.

Another I saw in the theater and loved, and a film that gives lie to the received notion that all remakes are terrible. Guess folks just aren't as familiar with this as we thought.

Yeah, I guess not. The Blob is the Rodney Dangerfield of monsters - it gets no respect!

I really dig this film, too and serves as a potent reminder of how they got remakes right in the 1980s. If you think about it, this film, THE THING and THE FLY were both top notch remakes.

I'm not a huge fan of the original but this version of THE BLOB is right on the money, right down to the mullet-sportin' Kevin Dillon and the cute-as-hell Shawnee Smith as the two leads. Not to mention, you've got fantastic character actors like Jack (ERASERHEAD) Nance and the always eccentric Del Close. What's not to love?

I think that this film is starting to get some much deserved love. I've run across a few people that speak highly of this version.

A great remake, and frankly I enjoy it more than the original. A script by Frank Darabont? C'mon!

Some marketing genius should package the Blob, Thing, and Fly remakes and sell it as "The Great '80s Sci-Fi Remakes Trilogy" (please feel free to riff on that working title).

J.D., maybe The Blob's time is finally coming around! And thanks for giving a shout-out to Jack Nance and Del Close - they definitely are a part of the 1988's Blob's appeal.

FF, your idea is perfect! Unfortunately I think all three films came from different studios. Remakes were definitely of a better caliber back then, though.

Yep, really hard to sell a film based on a space blob.

But a GREAT film nonetheless.

I bought the novelization last year, but it's a bit slow compared to the fast-paced film - same thing with, ummm, THE THING novelization: slow read.

And, not being cynical or anything, I thought the film fell into the worst of movie complaints: Boring.

Predators is a slowly paced movie - especially by today's standards. Many may call it boring. I'm still holding off till a second viewing before saying much about it. I might come down more on the negative side of the fence a second time around. I hope not, but we'll see.

One of my fondest teenage memories was seeing this at a drive-in on a double feature with 'Monkey Shines'. That may well have been the last time any of the local open air theaters in my neck of the woods had anything close to that level of awesomeness gracing their screens. Anyway, it's a great movie that holds up much better than the vast majority of horror flicks from that time period. Chuck Russell hasn't made a ton of movies, but the ones he has made are for the most part solidly entertaining.

The guy getting pulled down the sink might be a reference to King's THE RAFT; but it's probably a direct reference to a novel, THE CLONE, by Theodore Thomas and Kate Wilheim, wherein the titular creature (actually very Blob-like), pulls someone down a drainpipe.

Bob, Chuck Russell is definitely all right in my book. His most recent stuff hasn't knocked my socks off but he's never made a movie that I didn't at least enjoy. I even kind of liked The Scorpion King.

L. Ron, I wouldn't be surprised if you're right. Great catch!