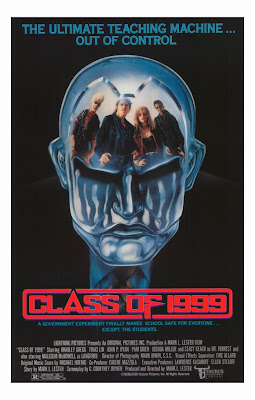 There's no way around it - the early '90s were a dry time for horror. Whereas the '80s were an embarrassment of riches, the '90s were more often than not just an embarrassment. Still, there was some fun to be had and I actually have an odd affection for this era of horror. There's something about looking back on these lean years that makes me nostalgic. One of these days maybe I'll figure out how to put in words. In the meantime, I'm looking back on the summer of 1990 for Summer Shocks this week.

It was a better summer overall than the dismal summer of 1989 but still not a very horrific one with many of the best offerings being such genre splicers as the horror comedy Gremlins 2, Sam Raimi's action-horror film Darkman, and the dark kid's film The Witches. The fact that Disney marketed their killer spider film Arachnophobia as a "thrill-omedy" says it all about where the attitude towards horror was back then. Straight-up horror just wasn't welcome.

Another genre-combo, the sci-fi/horror/action film Class of 1999 wasn't as high-end as its major studio competition. Directed by Mark Lester (Commando), Class of 1999 was an unpretentious B-movie that delivered solid action and FX on a meager (by Hollywood standards) budget. One thing I love about the early '90s is that it was the last hurrah for cheesy genre pics getting theatrical distribution.

Yes, cheesy genre pics are still out there but they're much more polished productions. And they also have a chance in Hell of being real hits. In early '90s, you had films like The First Power, Popcorn, Eve of Destruction and Split Second in theaters and it was strictly the diehard genre fans who came to see them. Maybe that's what I liked the most about the early '90s. Save for the occasional blockbuster, you didn't have anyone coming to genre films thinking it was the hip thing to do. These days, being a geek and being up on geek culture is cool; back then it was kind of an underground thing.

I saw a lot of horror and sci-fi movies in near-empty theaters back then but it was always time well spent. Like the kids in Class of 1999, I learned a lot. To read my full Summer Shocks review, click here.

Email ThisBlogThis!Share to TwitterShare to FacebookShare to Pinterest
Labels: 1990, Class of 1999, Summer Shocks