A Heaping Helping Of Venom 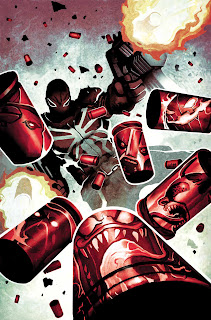 Any regular reader of this blog knows that I'm as much a comic fanatic as I am a horror junkie so I'd like to take a second to give a shout-out to the current series Venom, which features Peter Parker's high school nemesis (and later friend) Flash Thompson joined together with Spidey's arch-foe, the Venom symbiote (aka The Black Costume). 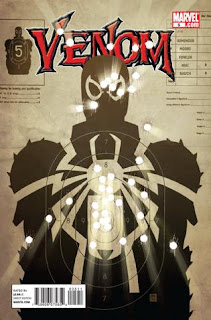 In Venom, Flash, now a war vet who lost both his legs below the knees while performing an act of heroism in action, is given a unique but peril-frought opportunity by the military - join with the alien symbiote known as Venom and perform various black ops duties as directed. The military has contained the symboite and wants to exploit its potential as a weapon. Under close monitoring, Flash will be allowed to bond with the oozing black menace for limited periods of time (while merged, the symboite's morphing form will fill in Flash's missing legs) and the symboite will be removed after the end of each operation before the physical and psychological bond becomes permanent. Of course, this plan is not without problems and soon Flash is much closer to the symboite than his military superiors had planned for. 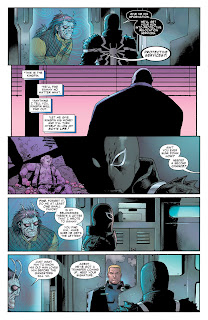 As written by Rick Remender, Venom was modeled as a twisted reflection of the early years of The Amazing Spider-Man. Remender took the angst and turmoil that Peter Parker endured under the direction of writer Stan Lee and artist Steve Ditko and raised it to nuclear shitstorm levels. Remender took the ironic premise of Spider-Man's biggest fan (Flash's heroism in combat was shown to be largely inspired by Spider-Man's never-say-die attitude) being turned into the dark mirror of his idol and really ran with it. 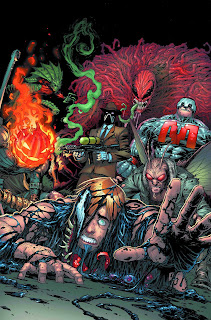 Lee and Ditko ensured that their teen hero had it rough in those early ASM issues (one constant thorn in Peter's side then being Flash) and it was the ongoing emotional gauntlet that Peter had to endure that made the book so groundbreaking and distinctive. Angst-ridden heroes are no longer a novelty, thanks to Spidey paving the way, but Venom has the distinction of having to cope with a world of hurt that would've made Peter Parker want to hide behind Aunt May's dress. 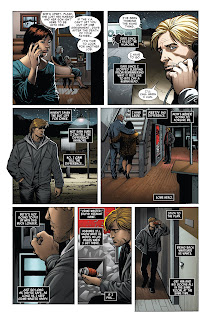 While Peter was guided by the memory by his loving Uncle Ben, Flash is haunted by the childhood abuse he suffered under the hand of his violent, alcoholic father (who ends up being diagnosed with cancer during the course of Remender's Venom run, making Flash come to terms with his angry relationship with his dad). Thanks to that sour relationship and his brutal upbringing, Flash himself is a recovering alcoholic - a struggle that's only compounded by his new partnership with the symbiote, which represents an almost irresistable addiction of its own. 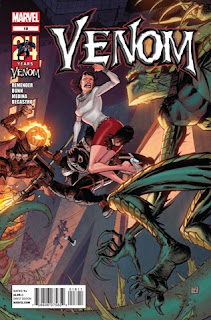 Remender also delibrately mirrored early ASM by having Flash's girlfriend be Peter's original girlfriend - one time Daily Bugle secretary and now reporter Betty Brant. Like Peter once did, Flash finds himself having to hide his secret identity from Betty and with his history of addiction, Betty is naturally suspicious that Flash has fallen off the wagon every time he vanishes for days while on a mission as Venom only to come back with a half-hearted excuse. Remender also included one of the most memorable foes from the Lee/Ditko days as Flash's key antagonist, a new incarnation of the masked villain known as Crime Master - making the new Crime Master's identity an ongoing mystery in keeping with the Lee/Ditko style. And where Spider-Man had to contend with the combined force of his greatest enemies when they teamed as The Sinister Six, Remender put Flash up against his own group of villains, The Savage Six. 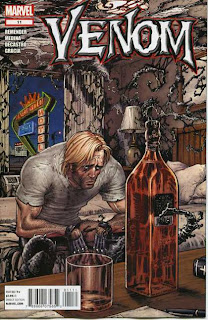 Each issue of ASM would typically end with Peter brooding over his problems and lamenting his failures and in step with that, an issue of Venom would similarly end with Flash obsessing over his latest round of troubles - only they'd be much more grim than, say, coping with Aunt May's latest fainting spell. An ending to an issue of Venom would likely have Flash off the wagon and sleeping in an alley. 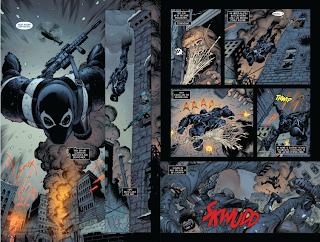 Remender just completed his run on Venom with issue #22, a story dealing with Flash's ongoing daddy issues in a tale titled "Father's Day." It's a great end to a great run - in my opinion, one of the sharpest runs in modern comics. Neither Flash nor Venom ever struck me as being particularly interesting before and I have to hand it to Remender for making Venom into such a strong book. He had some great artistic collaborators on board with him the whole way, with the likes Tony Moore, Stefano Caselli, Lan Mednia, Kev Walker, Declan Shalvey and others all taking turns making the book look incredible. 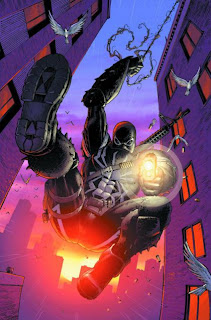 Remender's star has been rising at Marvel (thanks not just to his work on Venom but on Uncanny X-Force and other titles) so he's moving on to more high-profile gigs this fall penning Uncanny Avengers (a new flagship title for the company) as well as taking over writing duties on Captain America. I expect those books with be outstanding and I look forward to them but I'll sure miss him on Venom. I'll be giving incoming scribe (and former FANGORIA contributor) Cullen Bunn a fair shake but even if the quality doesn't keep up, the run Remender created is worth keeping and revisiting.
Posted by Jeff Allard at 8:18 AM

I haven't read any modern Venom comics, but I definitely don't care for his new look. I was more of a Carnage fan as a kid anyway (well, I still am).

Yeah, I always preferred Carnage to Venom myself - he's arguably the most hardcore Spidey villain of them all. He's still bumping around the Marvel U these days - in the fall he's due to show up in a storyline in Venom.

As for Venom's new look - he does slip into the classic Venom look with the big teeth, slobbering tongue and all that whenever Flash loses control.

Glad you are enjoying some comic books!

So many good comics, but only so much money to spend on them. Sounds like a series I would have enjoyed, but I'm trying to keep my addiction capped under $100 a month, and I've pretty much cut all the chaff from my pull list. Hopefully the library gets the trades and I can read it then.

Yeah, I'm trying to keep my pull list under control too. It's tough as there's a lot of good books out there and new ones coming along all the time.

BTW my friend, I've nominated you and your blogging for a Liebster Award. If you're up for it, great! Otherwise, no worries. Thanks

Thanks Mummbles! I don't think I blog enough these days to deserve any rewards for it but I sure appreciate the support!