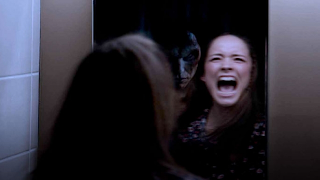 There's been a real horror drought on the big screen this summer. Even in the best of years, summer is never the peak season for terror but it isn't usually quite this light. So far we've had Abraham Lincoln: Vampire Hunter, Chernobyl Diaries, and Prometheus and that's about it, right? What ever happened to that movie Red Lights, with Robert DeNiro as a spooky psychic? That looked kind of cool but it sure didn't open anywhere in my neck of the woods.

With so few frights to be found on the big screen, I've had to turn to the small screen for my fear fix. It hasn't been ideal but I've gotten hooked on SyFy's cheeseball supernatural shows School Spirits and Haunted Collector (I haven't caught up with Haunted Highway yet and figure I can just let that one pass). If you've seen these shows, you already know they're as hokey as they come but, hey, I like hokey. My son is seven, is already a horror fanatic, and these have been perfect shows to watch with him - they're just creepy enough that he feels he's seeing something cool but not so intense that he's traumatized.

School Spirits centers on "true" tales of school hauntings with present day interviews with the real participants paired with staged reinactments while Haunted Collector is about a crack crew of paranormal investigators comprised of some old guy, his grown daughter and son, and another dude or two, who determine which object in a home or workplace or whatever is generating unwanted spiritual activity and then they, um, spirit it back to their home base and put it safely in storage. I like Haunted Collector more just because its premise of haunted objects reminds me of Friday the 13th: The Series and all the cursed objects of that show. Sadly there's no one on Haunted Collector as hot as Robey or even hot, period, but whatever. 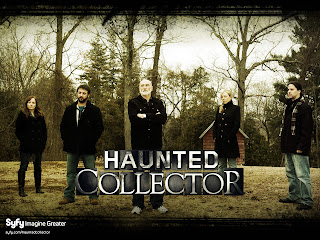 Even taking for granted that these shows are nonsense from the jump, the level of staged baloney on Haunted Collector is still impressive. There's something endearing about watching the Haunted Collector crew gather around to intently study video of a marble rolling across a floor or listen to audio of ghostly whispers. The casts plays it straight, never winking at how silly it all is, and that's just the way it should be. It's been a welcome dose of spooky escapism over the summer. 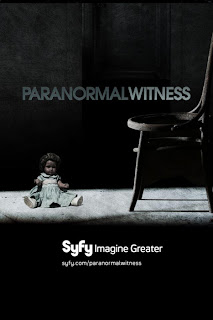 But as fun as they've been, it looks like School Spirits and Haunted Collector have merely been the warm-up for the real event of the summer - Paranormal Witness. I guess this, like Haunted Collector, aired its first season last summer but I wasn't paying attention at the time. Well, I'm watching now and the ads for Paranormal Witness look like pure hair-raising goodness. See for yourself, if you dare:


As the summer starts to wind down, the supernatural is finally seeping back onto the big screen with The Apparition and The Possession due to debut in the final weeks of August and while I'm sure glad to see them arrive I'm pretty thankful to SyFy for keeping the chills coming in the meantime.
Posted by Jeff Allard at 10:17 PM

At first, I was just going to refrain from commenting, but since you mentioned Friday the 13th: The Series, I felt I had to at least say something. I just can't get into any of these "paranormal/ghost" reality shows. I don't believe, so I just sit there as a super-skeptical Scully and any fun to be had is gone. More power to those who do enjoy them. And yeah, anything would be improved with more Robey!

I'm not a believer, either, so I definitely draw the line at shows like Ghost Hunters. But I find these shows easier to enjoy as they're just out to spin an eerie yarn or two and the fact that they're full of bunk doesn't matter to me.

I guess that is the key, just enjoying them for what they are. :)

I've never watched any of these 'ghost hunter' type shows... though I really like the classic 'Ghostwatch' and more recent 'Grave Encounters'... so maybe I should give them a try.