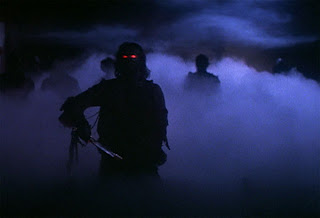 Those were the days before everybody had cable and before VCRs were common household items, when it was still a big deal when a theatrical film would make its network debut. It would be an edited, pan and scan version of the film, naturally - but it would still be a huge, gotta-see event because that was your only way to see the movie at all. The fact that movies had an unavailibility about them back then made them special to viewers, I believe. You didn't take movies for granted. You had to wait a couple of years to see, say, Raiders of the Lost Ark again and if you missed the broadcast, you were screwed. Now, you can just watch Prometheus on your phone.

Anyhow, The ABC Movie served as my introduction to some of my favorite late '70s/early '80s horror movies as they aired the likes of The Shining, the '78 Invasion of the Body Snatchers, Coma, The Little Girl Who Lived Down the Lane, and John Carpenter's The Fog.

The intros to those movies, with voiceovers by Ernie Anderson (father to director Paul Thomas Anderson and for years the Cleaveland, Ohio-based horror host known as Ghoulardi), were burned into my brain and are inseperable from my memories of the movies themselves. They set the mood so perfectly for the movie to come and ABC's "star tunnel" opening was so dramatic to begin with.

Ever since I was introduced to YouTube, I've been hoping that someone would post the intro to ABC's presentation of The Fog and finally, that day has come. Well, actually it looks like that day came way back in March but, hey, I can't remember to check for this stuff all the time!

To the poster who uploaded this clip, a thousand thank you's. And extra thanks for including the promos for Ripley's Believe It Or Not, That's Incredible, and Tales of the Gold Monkey as well! They remind me of good times.

Today I have more movies in my collection than I could ever possibly have the time to rewatch, even if I lived to be a hundred and twenty, and more cable channels than I know what to do with but what I miss are the days when I would see a movie advertized in the TV Guide, wait for it to air, and when the movie was over it'd be gone, leaving wisps of excited memories behind until the next time it came around again.
Posted by Jeff Allard at 8:10 AM

Email ThisBlogThis!Share to TwitterShare to FacebookShare to Pinterest
Labels: The ABC Movie, The Fog

Great post. Creative intros and many of the 'we now return to . . .' things that one used to see when watching films in the 80s and 90s are still a huge part of my horror film memory as well. I'll never forget when TV stations used to give you a little preview of a scene that was coming up from the movie once the commercials ended. When watching Halloween for the first time they kept showing the scene where Jamie Lee Curtis is peeking over the sofa with a knife, and I remember wondering how frightened I was going to be by then and whether or not I would even make it that far. I wish they still did things like this.

Yeah, me too - but it's the style of another era, I guess.

One of my all-time favorite movies and the ABC intro is classic!

What a nice trip down memory lane. I miss those days as well. Hell, I can remember when a new video game appearing your local arcade was a big deal and what great places they were to hang out with your friends. Sadly, they are all but gone as well.

WOW! Thanks, Jeff!
You're spot-on in your assessment of it as an "event." I remember Monday morning in chapel (that's the type of school I went to), and everybody'd be going on about the night before's movie (if there wasn't a sports event that superseded it). I hate to age myself, but I guess this is version 2; the one I remember was more like the old intro to NYC's The 4:30 Movie--and I never knew ABC showed The Fog.

Glad to see all the Fog love here, guys - thanks for the comments!

I didn't see The Fog until about 2 years ago, but I instantly loved it. Carpenter always creates such a creepy atmosphere, and I love the way he'll just scan through blank, still areas of the town and show how empty and eerie it is at times (he does the same thing in Halloween and the Thing). It also has one of my favorite original scores in horror, as well as plenty of the genre-favorite stars like Adrienne Barbeau, Jamie Lee Curtis, Janet Leigh, Tom Atkins, Hal Holbrook and Nancy Loomis. I also love the typical Carpenter, "is it really over," ending.
But I was born in '90, so I'm not from the age of movies being a huge event on TV. Thank you for posting that intro, it fits the movie perfectly in every way. Kinda gets me in the mood for October to come around, only 1 more month to go!

sm_haynes90, it's great to hear that old-school fear flicks like The Fog are still able to attract new fans! Thanks for the comment!