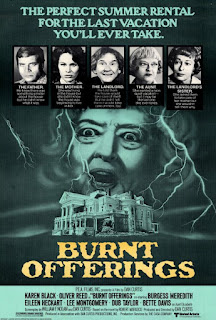 Some horror films are of such enduring power and undeniable craftsmanship – films like Psycho, The Exorcist, Carrie and The Shining – that they find a new and devoted fan base with each subsequent generation while others reside almost exclusively in the traumatized memories of the generation who first encountered them.

1976’s haunted house yarn Burnt Offerings would be an example of the latter, a staple of Gen-Xer’s childhoods whose reputation as a supremely frightening film has dimmed over the years. With Tim Burton’s revival of Dark Shadows currently in theaters, some fans will naturally want to take a look back at producer/director Dan Curtis’ original supernatural soap opera but thinking of Curtis’ contributions to the genre (‘70s horror wouldn’t have been the same without him) made me curious to revisit his adaptation of Robert Marasco’s 1973 novel.

Curtis’ work was almost exclusively for television (besides Dark Shadows, Curtis was responsible for many other well-remembered genre offerings, including the famed 1975 TV movie Trilogy of Terror as well as the initial two Night Stalker television movies) but Burnt Offerings was a rare excursion into feature filmmaking for Curtis – even if many of its most ardent fans ironically first discovered it not on the big screen but on TV.

Burnt Offerings tells the tale of the Rolf family – the married couple of Ben (Oliver Reed) and Marian (Karen Black), along with their twelve-year-old son David (Lee H. Montgomery) – who rent the sprawling, if slightly dilapidated, Allardyce Mansion for the summer for the too-good-to-refuse amount of $900. Now, even the most novice horror fan knows that whenever accommodations come cheap, no good will come of it. But while the low price tag on the Allardyce Mansion definitely should’ve have been a red flag moment for the Rolfs, they really should have started running the other way as soon as they met the batty brother and sister who were renting them the property – Roz and Arnold Allardyce, played with eerie eccentricity by Eileen Heckart and Burgess Meredith.

As an everyday safety measure, it’s important to learn to observe warning signs when they appear – especially warning signs that reveal themselves in bright, blinking neon – but unfortunately the Rolfs never developed that skill so not only do they shrug off the cheap rent and the spooky siblings (who like to talk about the house as though it were alive) but they even agree to take care of the Allardyces’ elderly mother who resides in a secluded bedroom in the mansion’s attic.

As the Allardyces explain, their mother never leaves her room and a tray with food will have to be prepared three times a day and left outside the mother’s door. What could be easier? Why the Allardyces would entrust the care of their mother for the entire summer to a family of strangers is briefly questioned by Ben but then quickly brushed off. After all, when you have the opportunity to live in a mansion for the entire summer for just $900, why ask too many troublesome questions?

Pushing aside whatever minimal doubts they might be harboring, the Rolf family head to Allardyce Mansion with the elderly Aunt Elizabeth (Bette Davis) in tow to share in all the fun and frivolity to come. Of course, the big dream summer they were hoping for doesn’t quite pan out. Ben suffers odd fits of blind rage (he tries to drown David in the swimming pool at one point), the once-spry Elizabeth (who chatted excitedly about acquiring her learner’s permit while on the ride up to Allardyce Mansion) quickly starts to deteriorate – wanting to sleep her days away and beginning to doubt her own memory – and Marian develops a weirdly obsessive relationship with the unseen Allardyce mother. Marian goes past leaving prepared trays to actually entering the woman’s room and once she does so she is quick to block anyone else in the family from making contact with their mysterious housemate.

Scripted by Curtis along with frequent collaborator William F. Nolan (Trilogy of Terror, The Norliss Tapes), Burnt Offerings is a slow burn of a film as the Rolfs gradually come apart under the uncanny influence of the house. While the house had been in a state of disrepair and neglect when they arrived, the longer the Rolfs stay and the worse their own mental and physical states become, the better the house looks. Even the dead flowers in the greenhouse are coming back to life and it doesn’t take a seasoned student of horror to see where things are heading.

It’s always odd to revisit movies that once terrified you and to see them with very different eyes and Burnt Offerings definitely appears very different now than how I – and surely how many of my generation – remember it. It no longer has anywhere near the same intensity (and not just because it’s dated – there are movies of even older vintage that I still find frightening) but yet some of its imagery is still effective.

The recurring specter of a black-clad chauffeur (Anthony James) was a chilling sight for me a child and it’s easy to see why James’ coldly smiling face (his eyes hid behind a pair of reflective sunglasses) was distressing. James’ chauffeur (who never utters a line of dialogue) is right up there with Reggie Nadler’s Mr. Barlow from Salem’s Lot when it comes to the great boogeymen of ‘70s horror.

James’ creepy chauffeur aside, what really made Burnt Offerings so traumatic to a generation of ‘70s kids was its shattering ending. Even during the ‘70s, when downbeat endings were the norm, Burnt Offerings’ grim conclusion – marked by possession, a fatal plummet, and a crumbling chimney stack – packed a special punch with its distressing depiction of the annihilation of a family.

Every child wants to believe that their parents will always be able to protect themselves, each other, and (most importantly) them from harm but the finale of Burnt Offerings offered no comfort in that regard. While it wasn’t uncommon for the protagonist of a horror film in the ‘70s to meet a bleak fate, I can’t think of many – if any instances – where an entire family came to such an alarming end.

I think every kid who watched Burnt Offerings on TV back in the day walked away afterwards looking as dazed as if they’d been hit upside the head with a 2×4. And, of course, information traveled slower then so movies were more apt to catch viewers off guard. You couldn’t find spoilers on the internet so movies had a greater advantage of surprise.

As much as Burnt Offerings buried deep psychic splinters into the memories of children who encountered it thirty some odd years ago, it’s a much more tepid experience today. I imagine that any viewer coming to Burnt Offerings for the first time now would find the film to be irritatingly slow and uneventful.

Back when it was a contemporary film, that lack of full-throttled pacing wasn’t an issue. Movies weren’t so geared to be adrenaline rides then. Even young kids were open to enjoying movies that rolled their stories out leisurely. Attention was more easily given. But that was then, and now Burnt Offerings is more of a test of patience than it is a test of nerves.

Still, the cast remains impressive. You can’t go wrong when a family is played by Oliver Reed, Karen Black, and Bette Davis (to his credit, Lee H. Montgomery – who also had appeared in the killer rat film Ben – manages not to be annoying as David) and the conclusion is still a nasty piece of work (in a PG movie, no less). Over the years, it’s become something of a neglected item when it comes to ‘70s horror but legions of fans that saw it at the right time in their lives will always carry a torch for Burnt Offerings.

Originally published 5/11/12 at Shock Till You Drop.

I didn't see this one until fairly recently... and I had been more aware of the book than the movie (though I never read it). The movie perplexed me a bit... felt like something was missing... and I've been curious if the book might be more effective.

Never read the book. Not sure how it compares to the film. I still enjoy the movie quite a bit but it might be one of those that you had to see as a kid back in the day to really feel connected to.

If you ever come across the recent Blu Ray put out by Kino Lorber, give it a look. There's an audio commentary by Richard Harland Smith that might give you a better appreciation of the movie. Even as a fan, it gave me new insights that I didn't expect.