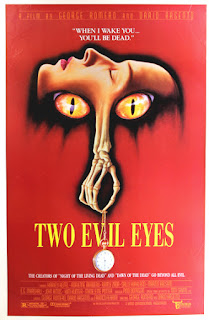 On paper, it looked like a dream project – horror masters Dario Argento and George Romero re-teaming for the first time since Argento served as producer on Romero’s seminal splatter masterpiece Dawn of the Dead (1978) but this time each gentleman would be directing one half of an Edgar Allan Poe anthology.

Originally, Argento had planned the film to involve two other directors as well (reportedly John Carpenter and Wes Craven), but scheduling conflicts and other concerns caused Argento to pare it down to the more manageable duo of just he and Romero. Even today, when expectations for their newer work has diminished some, I believe it’d still cause plenty of fan excitement for Argento and Romero to be collaborating on a project like this but back then, Two Evil Eyes held the promise of being a true event.

In addition, FX maestro Tom Savini was on board to supply his patented brand of grisly Grand Guignol so with that kind of killer talent and with such classic source material to work from, Two Evil Eyes looked like one of the most promising pictures of the increasingly horror-starved late ‘80s/early ‘90s. If anyone was going to show the world how it was done and put horror back on the map again, you couldn’t do much better than the combined forces of Romero, Argento, and Savini with the spirit of Poe guiding them.

As anticipated as Two Evil Eyes was, though, it ended up shuffling quietly onto home video with zero fanfare in the fall of 1991. At the time, the general verdict on Two Evil Eyes was that it came dangerously close to giving Poe a posthumous black eye but with the Poe-inspired The Raven currently hitting theaters, it seems like an appropriate time to revisit Argento and Romero’s tarnished team-up to see if it’s improved at all with age.

As far as Romero’s contribution goes – an adaptation of “The Fact in the Case of M. Valdemar” (previously adapted as part of Roger Corman’s 1962 anthology Tales of Terror) – the answer, unhappily, is “no.”

This remains one of the flattest offerings in Romero’s filmography. To be fair to Romero, his work on Two Evil Eyes seemed hampered from the start. His original choice for adaptation was “The Masque of the Red Death,” which he envisioned as an AIDS parable taking place in a high rise tower in the future, but even though he had completed a screenplay and hoped to cast Donald Sutherland in the lead as Prospero, Argento felt that Romero’s take on “Masque” wasn’t in the spirit of what he wanted the film to be and adding to that dubiousness, the news that Roger Corman was mounting his own remake of Masque of the Red Death caused Argento to use his position as producer to force Romero to choose a different Poe tale as source material.

Romero eventually settled on “Valdemar” – less out of a passion for that slight tale than out of wanting to avoid any overlap with Argento’s segment, which utilized so many familiar Poe plot elements that “Valdemar” was simply the rare Poe story that didn’t share too much common ground. In contrast to the metaphorical richness and potential for social commentary found in “Masque,” however, “Valdemar” offered a somewhat hokey premise involving hypnotism that had to be fleshed out into an actual story.

The story that Romero hatched – involving Jessica, the scheming younger wife of the wealthy, elderly (and near death) Ernest Valdemar, and her ruthless lover Robert (who is also Valdemar’s physician) – was disappointingly routine, with its plotting lovers, reanimated corpse, and sense of ironic justice feeling more in line with EC Comics than with Poe. Because Robert happens to have Valdemar under deep hypnosis when the man passes away, Valdemar is suspended in a state between life and death. Until Valdemar’s business is settled, it can’t be known to anyone that he’s dead so in order to ensure that Jessica inherits her full due, Robert withholds the command for Valdemar to “wake up”.

The catch is that having Valdemar existing in that limbo between this world and the spirit world serves as a gateway for what Valdemar describes as “the others” (a concept that brings a hint of Lovecraft to the story) to come through. These macabre elements are given a lackluster treatment with most of the running time devoted to the mundane machinations of the two money-hungry lovers. As Romero himself noted at the time (in an interview in Fangoria #95), “it feels like I’m directing an episode of Columbo.”

While Romero corralled some of his best Creepshow veterans for Valdemar – E.G. Marshall as Valdemar’s lawyer, Adrienne Barbeau as Jessica Valdemar, Bingo O’Malley (who appeared in Jordy’s various visions in “The Lonesome Death of Jordy Verill”) as Valdemar, and Tom Atkins in a brief appearance as a police detective – sadly, none of the performances register as more than perfunctory.

Say what you will about Romero’s later-day output but at least films like Bruiser (2000) and Survival of the Dead (2009) bear Romero’s personal stamp whereas Valdemar seems like a work for hire assignment for which Romero had little feeling. On the flipside of that, Argento’s delirious, depraved The Black Cat is clearly one of his best works – so much so that his full-throttle passion for the material only makes Two Evil Eyes feel more like a lopsided film.

As Romero told Cinefantastique in CFQ’s December 1990 issue, “As I was writing Valdemar, I had a few pangs of ‘Gee, should I be more studious?’ And when I read Argento’s script – which is such a love poem to Poe with references to many of his stories – I thought he was doing a much purer thing. I felt a little like I had been lazy.” Whether Romero’s assessment of his efforts is too harsh or not, it’s undeniable that Argento as a Poe scholar and aficionado simply schools Romero – making one wish that Argento had either done the entire film on his own or that he had perhaps collaborated with someone closer to his own sensibilities, like Michele Soavi (Stagefright, The Church) – then a protégé of Argento. In fact, Soavi briefly did some second unit directing on The Black Cat, followed by Luigi Cozzi (Alien Contamination).

Harvey Keitel stars as Rod Usher, an intense photographer who specializes in grisly crime pics. He lives in an upscale row home in Pittsburgh with his girlfriend Annabel (Madeleine Potter), a professional violinist. Rod and Annabel’s relationship is a testy one, with his hostile demeanor in conflict with Annabel’s dreamy, sensitive personality. Events take a turn for the worse when Annabel adopts a stray black cat that Rod takes an instant disliking to – a feeling that is only acerbated by Annabel’s need to protect the animal. When Annabel is out one afternoon, Rod strangles the cat – photographing the deed as he does it – and disposes of the body.

Annabel suspects Rod of killing the cat but can’t prove it but when Rod later publishes a collection of his photos titled Metropolitan Horrors (briefly considered as a title for the film) with the cover photo being her cat being choked, she knows. A confrontation leads to Rod murdering Annabel and, in true Poe fashion, sealing the body behind a wall in his home – an apparently perfect crime.

Using Poe’s tale only as a loose framework, Argento and screenwriter Franco Ferrini (who previously collaborated with Argento on Phenomena and Opera) turn The Black Cat into a true Poe-pourri of references to Poe’s entire body of work with images, names, and lines of dialogue lifted from a wide range of Poe’s short stories and poems – including “The Pit and the Pendulum,” “The Fall of the House of Usher,” “Berenice,” “Annabel Lee,” and “The Narrative of Arthur Gordon Pym.”

Argento is so thorough in paying tribute to all things Poe that a picture of the French poet Charles Baudelaire – whose translations of Poe’s work were instrumental in advancing the critical appreciation of Poe – can be spotted hanging on the wall along the staircase in Rod Usher’s home.

An effective portrait of a tormented psyche, The Black Cat is hampered slightly by an odd sense of naiveté in regards to the kind of public reaction that Metropolitan Horrors would generate. If such a book were published, even with assurances that no animal was harmed, Usher wouldn’t have time to worry about being tormented by a cat because he’d have to deal with his home being picketed by angry animal rights activists.

Also, the concluding moments of The Black Cat are awkwardly staged. I understand that Usher must perish in the manner that was prophesied by the markings in the cat’s fur but I doubt that even the most distraught mind would think that trying to exit from a second floor window while handcuffed to a dead man weighing in the ball park of 300 pounds is a winning idea.

I remember being confounded by these closing moments the last time I saw the film about twenty years ago and they make no more sense now. Argento and Ferrini should’ve sought a better way to end their tale but unfortunately it is what it is. Luckily, what it is is still mostly great. The Black Cat was Argento’s first film shot in America (he really revels in showcasing the city of Pittsburgh), it was his first film with big name actors, and the opportunity to pay homage to Poe (and perhaps a sense of unspoken professional competition with Romero) served to bring out the best in him.

When it comes to writing the book on Poe, cinematically speaking, that honor is likely to always remain with Roger Corman. But Argento’s contribution to Two Evil Eyes endures as a heartfelt toast from one dark dreamer to another.

Originally published on 4/26/12 at Shock Till You Drop.