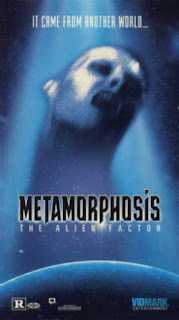 From the moment it was announced that Ridley Scott would be filming Prometheus, a film vaguely described as being set in the Alien universe, the overriding question was how much of Alien’s DNA would finds its way into the film. After having my questions about Prometheus’ mysterious Alien factor finally answered, I was inspired to revisit another film with its own “alien factor” – 1990’s Metamorphosis: The Alien Factor.

Initially developed as a sequel to 1983’s cult creature feature The Deadly Spawn, Metamorphosis evolved into something entirely separate from that earlier film. Deadly Spawn producer Ted A. Bohus returned to shepherd this new project but even though it was planned to be a straight sequel, for whatever reason those plans were scrapped and what emerged was a film that tread the same B-movie terrain and kept the same love of monster movies and old school FX as The Deadly Spawn but was otherwise unrelated.

Written and directed by Glenn Takajian (with “additional story material” credited to Bohus), Metamorphosis involves two teenage sisters who break into the top secret bio-research lab where their dad works as a security guard after they suspect that their dad (who never came home after his previous night’s shift) may be in trouble there.

Of course, these girls are 100% correct and, in fact, the situation is much worse than they anticipated. It seems that the government has happened upon some alien tissue so they’ve entrusted it to a research group called TALOS to run experiments on it with the hope that it will lead to some new, and undoubtedly awful, developments in the bio-weapons field.

But as movies have shown us time and again, alien DNA has a way of not behaving – especially not when it’s meddled with by scientists – and sure enough, once the tissue is spliced with lab animals and used to create mini-mutants, it’s just one infected human host later (as the head researcher suffers a nasty bite) and the TALOS facility finds itself dealing with the revolving transformation of Dr. Michael Foster (George Gerard) as he undergoes a prolonged and gruesome evolution.

As grim as the situation looks as the ailing scientist grows less human by the day, things will quickly go from simply ugly to apocalyptic if this human/alien hybrid gets free from the confines of the TALOS facility and hits the outside world. Making matters worse is the fact that Dr. Viallini (Marcus Powell), the sinister, white-haired scumbag who calls the shots at TALON, refuses to risk exposing what they’ve been up to in their labs so there’s no option to seek outside medical counsel for the researcher’s worsening condition.

Before long, the mutating Dr. Foster won’t be just writhing in a bed, he’ll be out on his feet (or slithering on his freshly slimed tentacles) looking to bring the pain and woe to any poor sap that happens to be walking the halls of TALOS – including security guard John Griffen (Matt Kulis), father to two spunky teenage daughters.

As you can gather from its simple set-up, Metamorphosis’ narrative is a by the numbers affair. Ultimately, this is a movie that’s mostly about having its characters fleeing down corridors with a slime-dripping, fang-filled, tentacle-lashing creature breathing down their necks but that doesn’t mean it isn’t great fun, or that its characters aren’t appealing. As formulaic as Metamorphosis is, Takajian mixes things up a bit by relating a good chunk of the action in flashback.

We begin in the middle of TALOS’ troubles as John Griffen investigates an anomaly alert in one of the labs only to be confronted with a bloody bio-researcher stumbling out of a lab, gasping his last breath. After Viallini and Dr. Foster’s fellow researcher (and romantic interest) Nancy Kane (Katherine Romaine) discover the carnage, we cut to hours later as Viallini has Foster recapping to two intimidating goons – Mitchell (Tony Gigante) and Jarrett (Greg Sullivan) – as well as to the audience the whole back story that brought the TALOS corporation to this point.

Once the flashbacks are over, the movie stays in the present for the duration of the film and the creature action escalates right through the climax. As to be expected in a low budget production, the acting in Metamorphosis ranges from adequate, to amateurish, to awful – but it should be said that even the worst performances have some charm.

Tara Leigh plays responsible older sister Sherry Griffen while Dianna Flaherty is her rebellious little sister Kim and Patrick Barnes is Sherry’s slightly dorky boyfriend Brian. For Barnes, Metamorphosis was his one and only acting credit while it was Flaherty’s last after appearing in two previous genre faves from Troma – The Toxic Avenger and Class of Nuke ‘Em High. Tara Leigh has appeared in only a handful of projects since, including Joe Dante’s 2006 Masters of Horror segment, “The Screwfly Solution.”

Whatever caliber of acting talent Metamorphosis had or didn’t have to assist in bringing its story to life, the movie’s real star power lay in the accomplished FX work of Vincent Guastini (who handled the film’s makeup chores) and Don Taylor (in charge of visual FX). Generally, low budget creature features keep their monsters lurking in the shadows but that’s not how it is with Metamorphosis.

Here, the creature is seen in full view in brightly lit corridors and labs and is seen often and it’s all done with practical effects. As with The Deadly Spawn, there are even several stop motion shots in Metamorphosis, too. Showing savvy showmanship as well as a canny use of their funds, Takajian and Bohus don’t shoot their wad early, saving the biggest and best FX for the climax.

With a prolonged climatic rampage on tap, this is the rare low budget monster movie that doesn’t show a last minute diminishming of resources. Projects like Prometheus are exciting because it’s never a bad thing to see an A-class filmmaker mounting a large scale sci-fi/horror picture with the money and muscle of a major studio behind them but Metamorphosis represents the flip side of that coin well.

It may have gotten somewhat lost in the direct to video shuffle of the early ‘90s and failed to garner the same cult following that The Deadly Spawn has but Metamorphosis: The Alien Factor holds the torch for B-monster movies just as high. It’s got heart, genuine enthusiasm and its low budget only seems to enhance – rather than hinder – its ambitions.

Originally published on 6/11/12 at Shock Till You Drop.