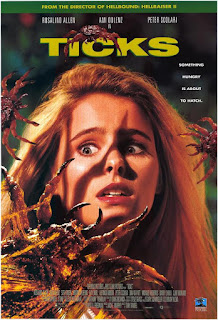 As most horror scenarios typically necessitate isolating the main characters from immediate aid, it’s not surprising that one of the most perennially popular settings for tales of terror has been your standard, dependable woodland cabin. Not only are rural cabins the perfect destination for teens and twentysomethings looking for a weekend away but they’re also the kind of place where all manner of mayhem can occur with little hope of rescue.

With Joss Whedon and Drew Goddard’s much-awaited The Cabin In The Woods revisiting and reinventing this archetypal horror trope, fans will no doubt be feeling nostalgic for past classics of the cabin in the woods genre. While the generally agreed upon gold standard of the sub-genre is The Evil Dead (1983) and its first sequel, 1987’s Evil Dead II: Dead By Dawn, I’d like to champion a mostly forgotten cabin in the woods film – 1993’s Ticks.

Ticks’ simple storyline concerns a group of semi-troubled city kids – including future Robot Chicken creator Seth Green as the agoraphobic Tyler, Alfonso Ribiero of The Fresh Prince of Bel-Air as Panic, a would-be gangsta whose intimidating street persona hides a good heart, and ‘90s Scream Queen Ami Dolenz (Witchboard 2) as the spoiled Dee Dee – who journey to a wilderness retreat under the supervision of eager social worker Holly Lambert (Rosalind Allen, of Children of the Corn II: The Final Sacrifice) and her sociologist boyfriend Charles Danson (Bosom Buddies’ Peter Scolari).

What these kids and their adult chaperones don’t know is that they’re heading into a proverbial tick-ing time bomb. You see, thanks to hard economic times in this logging community, many in this serene rural area (including one muttering eccentric played by Clint Howard) have turned to pot farming to make ends meet and the use by some of an illegal chemical fertilizer on their covert cash crops has sent the local tick population into evolutionary overdrive. Slimy, pulsating cocoons harbor the next generation of super ticks and in rapid succession they start to hatch and as these cocoons of doom burst, the woods become alive with hordes of scampering, skittering, blood-sucking menaces.

Adding to the already dire danger is a unlikely pair of marijuana growers named Sir (Barry Lynch) and Jerry (Michael Medeiros). Looking to keep their activities hidden from potentially prying eyes, Sir (who seems to have modeled his slick look and archaic mannerisms after some ‘30s movie villain) and Jerry (a backwoods cretin straight out of Deliverance) have no qualms about resorting to murder but by Ticks’ chaotic climax both friend and foe alike will be forced to fight for their lives inside a single cabin under siege.

For a movie about mutant ticks, Ticks has a pretty fine pedigree of talent involved. Directed by Tony Randel (Hellbound: Hellraiser II) and produced by Brian Yunza (Re-Animator, Society), Ticks was a bright spot on video store shelves cluttered with ‘90s direct-to-video dreck. Make no mistake, Ticks is 100% B-movie cheese but Randel had proven himself to be a sure, if unspectacular, hand at the genre with Hellbound as well as with the offbeat vampire pic Children of the Night (part of the short-lived run of Fangoria Films) and Ticks reflected his no-nonsense but still respectful approach to genre fare.

Yunza also had a mostly rock-solid track record at the time and his involvement in a film then was a good indicator that you’d be in for a movie that delivered the gruesome goods. At the time of its initial video release, Ticks came across as a genial throwback to the popular eco-horror fad of the 1970s (represented by such films as Frogs, Kingdom of the Spiders and Day of the Animals). Ticks comes by that ‘70s vibe authentically as its storyline was originally conceived two decades earlier by the film’s special effects supervisor Doug Beswick (known for his stop motion work on such classics as Evil Dead II and The Terminator) in a treatment titled Cycle of Blood.

As Beswick told Fangoria prior to Ticks’ release, make-up maestro Rick Baker was briefly involved early on after he and Beswick met on the set of 1971’s Octo-Man. Said Beswick in Fangoria #123: “Rick hadn’t become famous yet and he was going to do the makeup while I did the stop motion.” But as it took a couple of decades for Beswick to find a producer that was interested in his idea, future Oscar winner Rick Baker never added Ticks to his resume (it’s a shame the film was never made in the ‘70s with Baker on board as it would’ve made for a great drive-in double bill with another eco-horror classic that Baker did work on, 1976’s killer worm tale Squirm).

Despite coming up with the concept, final scripting duties on Ticks fell to writer Brent V. Friedman, who had previously penned 1992’s The Resurrected, director Dan O’Bannon’s underrated Lovecraft adaptation of the story "The Case of Charles Dexter Ward." But even if he wasn’t responsible for the screenplay, Beswick is still arguably the star of Ticks as the effects done under his guidance are a nasty, gooey delight.

Fans of practical FX often cite classics like Carpenter’s The Thing or Day of the Dead as examples of how hands-on movie magic can’t be matched by CG but while those films are certainly great, I think a B-movie like Ticks shows how a very minor film can be instantly elevated by ingenious, well-executed FX.

Ticks has an amiable cast of mostly familiar faces, unfussy direction, and a fast-paced, pulpy narrative but it’s the ticks that really make Ticks tick. For an exploitation film, Ticks is surprisingly mild-mannered (despite a cast ready made for being picked off, only one youth falls victim to the ticks – although it should be said that the torturous series of events that this character suffers through is rivaled on film only by The Passion of the Christ) but the ticks (including a supersized “Steroid Tick”) are glorious to see in action.

Certain genre films endure for a variety of reasons. Some films are so innovative that they change the visual language of cinema. Some feature iconic characters. Some films embody ageless anxieties better than others. Some are of such indisputable quality that “classic” is the only word for them. But all other virtues aside, sometimes simply having just one single element that no other film has is the key to genre immortality – even if the rest of the film around it is flawed.

So if anyone asks, “Is featuring the finest mutant ticks in cinematic history enough for a movie to be remembered?” the answer is “Hell yes!” With that in mind, here’s to Ticks, a movie destined to forever remain the standard against which all (if any) future killer tick flicks must be judged – as well as yet another helpful horror film reminder for kids to stay out of the woods.

Originally published on 4/12/12 at Shock Till You Drop.