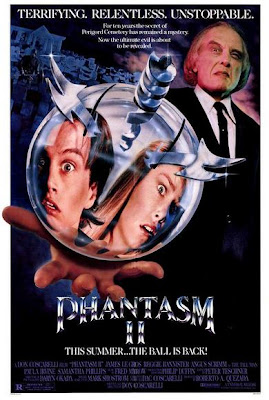 Amid the bright hues of the '80s, writer/director Don Coscarelli's Phantasm II (1988) forged a dark path through a wasted America of violated graveyards, abandoned towns, and ghoul-ridden mortuaries. With Angus Scrimm at his cadaverous best returning as the Tall Man and with his arcane arsenal of flying spheres capable of even more diverse acts of mayhem (they have so many astounding applications they deserve their own not-found-in-stores infomercial), Coscarelli's sequel to his 1979 cult classic was a satisfyingly macabre follow-up.
Phantasm II is essentially one long chase as the survivors of the original film - young Mike Pearson (James Le Gros, replacing A. Michael Baldwin) and balding ice cream jockey Reggie (the returning Reggie Bannister) - hit the road in their black Hemi Cuda to hunt down the elusive Tall Man and kill him once and for all or die trying.
Seamlessly picking up from the last moments of Phantasm (with some ingenious sleight-of-hand from Cosarelli, making it convincing that not a minute has passed for these characters), we see Reggie put down his guitar and jump into action, saving an unconscious Mike from being dragged off by the Tall Man's diminutive minions. Reggie gets himself and Mike to safety and - thanks to a gas stove - is able to blow Mike's house to debris as the Tall Man watches.
When we next see Mike in present times, he's intent on seeking out a young girl named Liz (Paula Irvine) who he's developed a psychic rapport with (and who also has visions of the Tall Man) but because Mike never backed off from telling his tale of the Tall Man, first he has to bullshit his way out of the mental institution he's currently incarcerated in. Once on the outside, Reggie tries to convince Mike that they only imagined their incredible ordeal of years ago. But when the Tall Man strikes again, exacting a catastrophic toll, Reggie is forced to team with Mike on a do-or-die mission of vengeance.
Even though the '80s were known for its portrayals of macho invincibility, Coscarelli doesn't depict Mike and Reggie as Rambo-esque action heroes. Instead, they're credible, fallible characters - always a frustrating step behind the Tall Man, working past an array of lethal booby-traps and taunting messages ("Come East if you dare!"). When they do offer some signs of bravado (as Reggie calls out to one henchman: "Come on, you Mutha!"), it's quickly followed by a humiliating smackdown.
More often than not, the overwhelmed duo are seen openly doubting what they'll be able to accomplish against the Tall Man's forces. Mike and Reggie are portrayed as soldiers embedded in enemy territory - rousting mausoleums, prowling cemeteries, and torching funeral homes - and like most foot soldiers, they're denied a view of the big picture. From one bloody skirmish to the next, they can't ascertain whether or not their missions are thwarting their foe's larger goals.
But the audience never has a privileged view of what's going on, either. In true Phantasm fashion, by the end of Phantasm II we have no clue as to what the Tall Man's goals are. Is he from another planet, or from another dimension? We don't know. But to me, it hardly matters. The action is fierce, the gore is gratuitous by late '80s standards (compared to what the MPAA was letting, say, the Friday the 13th sequels get away with at the time, Phantasm II was spectacularly nasty - like the moment where a drill-equipped sphere burrows its way through a henchman's body), the car and weapons are memorably bad-assed (check out the four-barreled shotgun!), and the chemistry between Le Gros and Bannister has a natural camaraderie (I wish Le Gros could've continued in the part, in fact, rather than Baldwin reclaiming the role).
It may not have a proper beginning or a real ending but for all its loose-ends and open ambiguities, Phantasm II feels oddly complete to me. It may not tell the most coherent tale but by sticking close to the grave, Coscarelli's morbid instincts prevail. While the Phantasm saga may have been sidelined, Phantasm II is a lasting reminder of a time when Cosarelli still had all his balls in the air.
Posted by Jeff Allard at 4:12 AM

I wish someone would put this out on DVD already. It's been so long since I actually saw it (in a theater) that I don't even know how well it will hold up, but I'd like the chance to find out in all the widescreen glory that was intended.

Yeah, I don't know what the legal hassles are that're preventing this from a US DVD release but it really sucks not to have the best of the Phantasm series available. For those who have all-region players, Phantasm II has been released overseas but that doesn't help the rest of us.

PHANTASM II just teeters on the edge of greatness - the first 20-30 minutes is great and the last third with the sphere chase is balls-out awesome.

It's that middle section where almost everything stops to a halt, and the realization that you really haven't learned anything new that just leaves a sour taste in your mouth, intensified with the follow-up sequels.

I'm ok with that middle section. I know what you're saying but as far as I'm concerned, the beginning and the end are so kick-ass, the middle can be anything it pleases! And it's a pretty short movie as I recall so it doesn't meander all that long before gearing up for the climax. I agree about the sequels, though - they're not so hot.