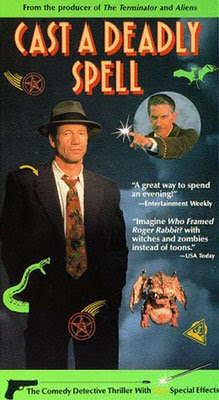 I haven't seen Hellboy 2 yet but Guillermo del Toro's reportedly outstanding realization of all manner of magic, monsters, and myths with its gruff-natured, blue collar hero has put me in mind of the seldom-mentioned made-for-HBO movie Cast a Deadly Spell (1991). A Raymond Chandler-esque film noir boasting state-of-the-art special effects, set in a lushly depicted 1940's Los Angeles, with H. P. Lovecraft as a hardboiled private detective (!), would seem to be an automatic shoo-in for cult status but Cast A Deadly Spell seems to be all but forgotten today.
Perhaps if Cast A Deadly Spell were more brooding, along the lines of such effective meldings of noir, horror and sci-fi as Blade Runner (1982) and Angel Heart (1987), it would have scored more with fans. But this is a light, whimsical affair and for many, that doesn't mesh with the kind of shadow-shrouded existentialism that noir is known for - not to mention the cosmic horror of Lovecraft's works. Many of Lovecraft's protagonists found themselves driven mad by the eldritch horrors they were forced to witness but here a wisecrack is a more ready response.
Based on a script originally titled Lovecraft by Joseph Dougherty, Cast A Deadly Spell takes place in an alternate Earth of monsters and mythical creatures (one character hunts unicorns for sport) where magic facilitates even the easiest of tasks. The sole hold out to this casual acceptance of magic is private detective (and former policeman) H. P. Lovecraft, played by Fred Ward ("You're the only guy who isn't walking around with a magic wand up his ass" as one character puts it).
Early in the film, Harry is summoned to the wealthy home of millionaire Amos Hacksaw (David Warner), who wants to hire Harry to find the forbidden text known as The Necronomicon. Two copies exist - one real and one fake. Both, however, have been stolen from Hacksaw and he needs to have them returned.
We learn that both books have been stolen by a mob figure named Harry Borden (Clancy Brown) who just happens to be a former cop, and Lovecraft's old partner on the force as well. Borden is no criminal mastermind but magic has helped him parlay his greed into a thriving underworld career. He doesn't have the ability to use the Necronomicon for himself but he intends to keep it in his possession until he gets the price he wants for it.
Of course, because Hacksaw is played by David Warner and Bordon by Clancy Brown, we know that if the Necronomicon stays in either man's hands, it will only be a matter of time before its evil words are put to use. But the fun is in watching their plans reveal themselves and seeing how Lovecraft stays above the fray. Like many protagonists of noir tales, Lovecraft possesses an impeachable moral code in a compromised world.
Unlike Nicolas Meyer's endearing Time After Time (1979) which sent author H. G. Wells on a time-spanning adventure, this is not an imaginary backstory for Lovecraft's dark inspirations - even though the Necronomicon and The Old Ones figure heavily into the film's plot. Ward's Lovecraft is strictly a P.I. - not a burgeoning literary genius.
Cast A Deadly Spell was an early success for director Martin Campbell, who would go on to team up again with producer Gale Anne Hurd (Aliens) on the underrated sci-fi action film No Escape (1994) before successfully relaunching the James Bond franchise not once but twice (with 1995's Goldeneye and 2006's Casino Royale).
And Tony Gardner's Alterian Studios (best known for their work on Raimi's Darkman) provides a variety of well-rendered demons, gargoyles, and other netherworld beings in a film that has its feet more in the world of practical make-up than in the then-rising world of CGI. Ironic, in that the 'magic' of CGI technology would soon become the standard solution for filmmakers because, as the characters in Lovecraft's world would say, it "makes life easier."
Ward, as anyone would expect, is his usually charismatic self with the right cocksure demeanor and plenty of sardonic attitude. Some of Dougherty's lines are real gems, and are only made better by Ward's sharp delivery ("All that smoke and not a lick of flame to back it up!"). And he has impeccable back-up from the rest of the cast. Besides Warner and Brown, there's also the late character actor Charles Hallahan (The Thing) as Detective Bradbury (another shout-out to a literary master) and Julianne Moore in an early role as the obligatory Woman With A Past. And just to stay in step with the conventions of the genre, she also sings torch songs in a nightclub run by the mob.
Never released on DVD, Cast A Deadly Spell is a solid B-movie with a great cast, endearingly old-school effects, and an appealing sense of humor. It may not be considered canon as far as Lovecraft lore is concerned but neither should it be a lost example of the author's arcane influence.
Posted by Jeff Allard at 3:57 AM

It also spawned a sequel, WITCH HUNT (I think), with Dennis Hopper in Fred Ward's role, and Paul Schrader directing. It was interesting, but not as successful as CAST was, since no other segments were produced.

Yes, WITCH HUNT is the title. And it apparently did get a DVD release, but I'm not sure if it was R1 or R2

Yep, I remember Witch Hunt. Never took the time to watch it, though. From the look of it, it seemed like it just wasn't going to be as fun as CADS.

Wow, I have not thought of this movie in ages - but as a matter of fact I have a VHS recording of it from when it first ran on HBO .

Now I have to dig that up and give it another watching.