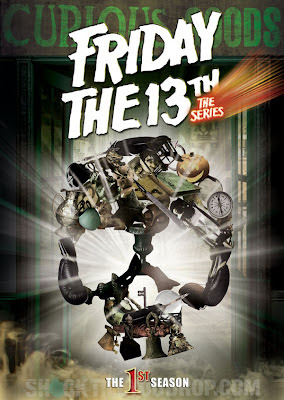 When I read that that Paramount would finally be releasing Friday the 13th: The Series on DVD, it was a celebratory occasion for me. The series (which ran from 1987-1990) about the hunt to retrieve scores of cursed antiques had its short-comings, sure, but it was a late-night favorite for me during my college years and all-told it was a pretty neat show - a reliable fix of small screen terror at a time when big screen genre fare was on the wane.
So what if the DVD release was likely to be a bare bones affair (and, as just reported at Shock Till You Drop, it will be) - at least I'd finally own a legitimate release of the show after years of upgrading from one incrementally less shoddy bootleg set to another. To my mind, there was really nothing about this release that could disappoint me.
However, when I clicked on yesterday's Shock Till You Drop headline: "Friday the 13th: The Series DVD Art" and excitedly scrolled down the page to see what I'd be picking up on September 23rd, it took me a beat or two to wrap my head around the image (seen above) that I was looking at. What was this? What the Hell was I looking at? Oh, goddammit...it's a skull design...made out of antiques! That's so fucking...dumb. The best thing I can say about this hideous artwork is that there's an undeniable irony to the fact that Paramount has made a show that revolved around antiques into something like looks like junk. Way to go!
I mean, come on - would it have been so hard to have simply utilized some promotional material from the original run of the show or even do something like a lenticular cover that re-created the moment from the show's opening where the title Friday the 13th: The Series materialized in a shattered glass? I don't know - almost anything else would've been an improvement over what they're actually going with.
Maybe I'm just over reacting, maybe this looks fine to everyone but me. But while I'm still excited to own the show on disc, my first thought upon looking at that piss-poor cover was that Friday the 13th: The Series had left Curious Goods only to go straight to the flea market. I just hope that Paramount will put more care into the packaging for Seasons Two and Three. If not, maybe the show itself was cursed all along.
Posted by Jeff Allard at 4:41 AM

Email ThisBlogThis!Share to TwitterShare to FacebookShare to Pinterest
Labels: Friday the 13th: The Series

They passed up a chance to put Robey on the cover? Are they insane? I'm going to have to glue one on myself!

You said it! It just blows my mind how anyone could fuck this up so badly. Gaaah!