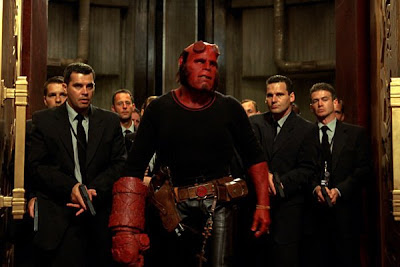 Outsiders, monsters and freaks have regularly been cast as heroes or anti-heroes in everything from comic books such as The X-Men and The Doom Patrol to Clive Barker's Nightbreed. But Guillermo del Toro's sequel Hellboy II: The Golden Army marks the first time that I thought a film's monsters were put on too high a pedestal. It might be crazy to say so, but the fact that no humans are allowed to measure up to del Toro's magnificent monsters in Hellboy II just rubbed me the wrong way.
For starters, when some unlucky human members of B.P.R.D. get devoured by calcium-eating 'tooth fairies' while on a hazardous mission, their grisly demises are barely given a glance. At least the Red Shirts on Star Trek were granted the final dignity of a "He's dead, Jim!" but when these expendables in Hellboy II meet their nasty end while fighting to their last breath against enemies they're not equipped to handle, it doesn't even merit a mention. I wouldn't expect the movie to stop for a funeral but when the climax of this scene - which involves the selfless sacrifice of at least two people - depicts Hellboy seizing the opportunity to reveal himself to the world and turn himself into an instant celebrity, his actions come across as obnoxious and self-serving.
And Jeffrey Tambor's beleaguered B.P.R.D. bureaucrat Tom Manning returns only to be made out to be an even less sympathetic character this time around! I haven't seen the original Hellboy since I watched it in the theaters but I seem to recall that this character was allowed a moment of redemption towards the climax where he was shown to have some heroic or redeeming qualities. That's not the case here. Now he's a complete ass who hides behind regulations and resents his responsibility to the defiant, unmanageable Hellboy. Usually with a character like this - the officious, book-keeping, rule-observing suck-up - there's a point where we're given a glimpse of their better qualities. But in Hellboy II, Manning remains a jerk right to the end. We also learn that the only other prominent human character from the first Hellboy (2004) - the plain but decent Agent Myers (Rupert Evans) - has been shipped off to the white wastelands of Antarctica courtesy of Hellboy himself.
All of Hellboy and co.'s brushes with the world at large in Hellboy II are sour. And while del Toro makes this out to be humanity's fault, I don't quite buy it. When there's a sprawling battle in the middle of a city street with Hellboy against an Earth elemental, Hellboy rescues an infant but instead of taking the nearest opportunity to leave the baby in safer arms, Hellboy carries the baby with him throughout a battle that sees him scaling a building and dodging enormous tentacles that threaten to turn the building he's on into rubble. And while the baby stays unharmed, it's hard not to sympathize with the frantic mother and angry crowd that greets Hellboy after he's won the battle and returns the child.
I mean, when a mother sees her weeks-old child hauled up the side of a building by a demon, I can definitely understand gratitude not being the first response - especially when that baby didn't have to be taken along for the ride. I can't fault that character's reaction at all but I think that del Toro really wants the audience to be stung - or even outraged - by the hostility that Hellboy and co. have to endure.
Yes, what gall this woman has to be so uncool! Maybe the next time this mother sees a demon wrap her baby in its tail and climb five stories up a building, she'll keep the demon's feelings in mind before making a scene.
In Hellboy II, del Toro's monsters have very human traits - their actions are often selfish, boorish, immature and self-destructive - but yet their needs, desires and the mistakes they make in pursuit of them are continually excused as justified passions while ordinary people are small-minded, fearful and bitter.
It's true that humankind isn't always pretty but you shouldn't need gills, a second head or a set of satanic horns to rate some sympathy or respect.
Posted by Jeff Allard at 8:55 PM

I still think it's a worthwhile bit of entertainment, and I like some of what Del Toro is trying to say. But you've pointed out some very real and relevant flaws in the film that I think I glossed over on first viewing.

There's a lot I liked about Hellboy 2 - mostly to do with del Toro's old-school use of puppetry, animatronics, and prosthetics. But overall, I just wasn't sold on it.