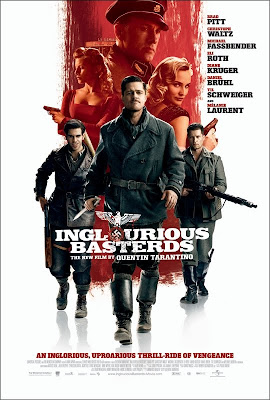 When I first saw the trailers for Quentin Tarantino's latest film, Inglourious Basterds, I had to roll my eyes just a little. Not due to any lack of enthusiasm for seeing the film or because any of the clips looked bad. Instead, it was a reaction to the marketing hyperbole used to sell it - "You haven't seen WWII until you've seen it through the eyes of Quentin Tarantino." I just thought that was a move bound to create expectations that the film likely couldn't live up to. After all, what could Tarantino really do that no other WWII film has done?

Having now seen Inglourious Basterds, it turns out I was both right and wrong in being concerned about how this movie was sold. I was right in the sense that I believe most people are going to go into this expecting that WWII "as seen through the eyes of Tarantino" is going to mean that this is going to be more outrageously violent than any other WWII film. And as a large part of the trailers have played up the deeds of the Basterds themselves, that's probably a fair expectation. But that's an expectation this movie does not even come close to fulfilling. Yes, there's shootings, scalpings, and bludgeonings - but nothing overly graphic and what violence there is comprises very little of the film's two and a half hour running time. So I think Dimension unfairly created a situation where most viewers are going to walk out feeling cheated, and that does a disservice to this movie.

Where I was wrong, though, is that Inglourious Basterds really is different than any other WWII movie. I realize now that it isn't hyperbole to say we haven't seen WWII until we've seen it through the eyes of Tarantino - it's a fact. To call this 'revisionist history' doesn't cover it. We've seen movies about plots to kill Hitler before (like the recent Valkyrie) and we've seen movies that reveal unknown aspects of the war - but even when these movies were fictitious, they always fit their stories around the facts. No one has ever felt that they had the license to change history - until now.
While it doesn't become apparent until Inglourious Basterds' climax just how loose with the true story of WWII that Tarantino is really playing, when it does, it feels like a liberating experience. To see a film about history where the writer/director doesn't feel a responsibility to tell it like it was, but instead how he imagines it to be is - I believe - unprecedented. Sure, filmmakers have taken a liberties with history and historical figures before but usually it's in the guise of science fiction or comedy. And even then, it's usually with one eye on leaving the facts intact. You know, the assassination of JFK was averted by time travellers - but because it created a disturbance in the future, they have to make sure history plays out as it was originally meant to. And even though Bill and Ted might meet Abraham Lincoln, we know that the Great Emancipator will still die at his appointed hour in Ford's Theater.
With Inglourious Basterds, Tarantino rewrites WWII according to his imagination. If you want history, you can find it in a book, or on the History Channel. This is a movie, not a documentary. Tarantino doesn't have to apologize for getting history wrong because this isn't history. This movie can cross any line that Tarantino sees fit to cross. And for the most part, Tarantino isn't telling us anything that seems outright implausible. We might know that the Basterds themselves never existed and that there was never a Nazi propaganda film called Nation's Pride and that Hitler never attended its premiere, but Tarantino isn't deliberately upsetting any apple carts. He's telling the story that he wants to tell, with the characters he wants to tell it with - he just doesn't feel the need for history to force an ending on him. There's a great exploitation film in WWII and Tarantino's going to write it the way he sees it.
I don't know if Tarantino's going to win back a big audience with Inglourious Basterds - I suspect he won't. But I do think he'll win back fans who were unhappy with Death Proof and even Kill Bill. If nothing else, there should be total agreement that Inglourious Basterds is home to some of Tarantino's best characters - in particular SS officer Hans Landa, aka 'The Jew Hunter'. As played by Christoph Waltz, Landa is one of the all-time great movie characters - a movie villain that feels instantly classic. After Inglourious Basterds' opening scene, you will fear for anyone that crosses Landa's path. Not because of any violence the character inflicts but because nothing escapes his laser-like attention. In another film, this character would be a hero - a detective whose skills and powers of perception are unparalleled. But because Landa's gifts are at the service of Hitler's Third Reich, he's a figure of evil. Landa is an amazing creation and although Tarantino has always promised his fans sequels or spin-offs involving characters from Reservoir Dogs or Pulp Fiction, Inglourious Basterds is the first time I really wanted Tarantino to continue telling further stories with his characters.
And if that never comes to pass, well, maybe that's for the best. When it comes to sequels, history tells us that what was glorious once is often inglorious the next. And that's a history lesson even Tarantino may not be able to rewrite to his satisfaction.
Posted by Jeff Allard at 7:45 AM

Sounds pretty good to me! I never trust marketing of any film anymore...always leads to some sort of disappointment. I can't wait to see IB though, unfortunately, I have to wait till probably Monday to see it. Great write up, glad that you liked the film and now I have a better understanding of what I'm getting into.

It's a great film - I just wish they had marketed it in a way that was more honest to what the movie is because I'm sure there's going be a lot of crying about the lack of action and gore or the fact that Brad Pitt and his crew aren't really the focus of the movie. But it's Tarantino's best film since Pulp Fiction, in my opinion.

Watched this idiot on CHARLIE ROSE last night -- spouted off that he wanted to make a film about John Brown, much in the same fashion, and not let history get in the way.

Not looking forward to that - maybe he'll steal something from MANDINGO to further the point that 'slavery was bad'.

Well, I'm not too taken with Tarantino in general - at least as far as how he comes off in interviews. But a few of his films I've really loved and IB is one of those.

Good commentary...
I'd been hoping this would channel the spirit of some of the old gonzo WWII movies like 'Ilsa: She Wolf of the SS' and 'The Passage.'
It sounds like it's something else... but still pretty interesting.

Hey Knob,
Yeah, this isn't a gonzo WWII movie at all. But unlike Death Proof, which I thought promised one thing and delivered something a lot less satisfying, I think IB worked.