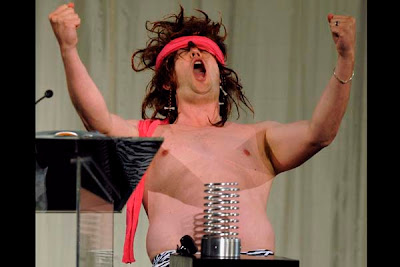 I just wanted to take a moment to send out a couple of belated 'thank yous' to the kind givers of this blogspot's latest online honors. First, my buddy Matt at Chuck Norris Ate My Baby generously sent an award my way proclaiming Dinner with Max Jenke to be 'A Great Read'. And Eric, of the esteemed Film Father, sent me an 'Honest Scrap' Award (defined as being 'bestowed upon a fellow blogger whose blog content or design is, in the giver’s opinion, brilliant' - woo!). My thanks to both of these great bloggers for taking the time to single me out for some attention. As part of accepting the Honest Scrap Award, I'm supposed to share 10 facts about myself, which shouldn't be hard to do but yet somehow, it is.


9. I wrote a letter to ABC in 1982 asking them to keep Darkroom on the air. The fact that it failed to make a difference has kept me from taking on any further political action in my life.


8. I think that Godzilla should never lose. Period.


7. I have never owned a home video game system.


5. I once fabricated a book report. In 7th grade, I 'reviewed' a non-existent sci-fi novel (that I called Galactic Journey) and I got an A -.


4. I avoid driving on the highway - even when doing so makes travelling inconvenient.

3. My first Halloween costume was Spider-Man.

2. I like to have ice cream in a dish, rather than in a cone.

Although I'm supposed to pass on these awards to other deserving blogs, so many blogs that I read have all received these same awards. So instead, I'd like to cite the most recent additions to the Side Menu - ten excellent blogs I should've discovered earlier, but didn't:


Made For TV Mayhem


As KMD would say, they make other blogs look crazy weak!
Posted by Jeff Allard at 10:54 PM

Thank you, Jeff, for the shout out. I really appreciate it and I'm glad that I found your blog, also. You deserve all the praise. Thnx again.

No thanks necessary, Hans! Glad to have you coming by.

KMD: Best of the old-school MC's!