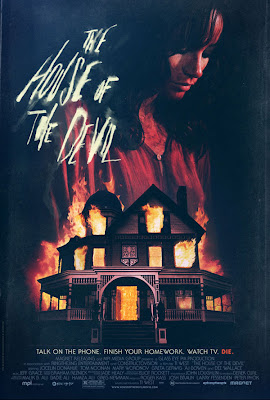 Ti West's '80s-set shocker House of the Devil (which makes its video on demand debut on October 1st and plays in limited theaters on October 30th) has gotten a lot of advance raves and while I'm taking those early reviews with a grain of salt (West's 2005 killer bat film The Roost also earned accolades while it was on the festival circuit but I found it to be unwatchable), I have to say what a huge fan I am of its poster - a pitch-perfect throwback to the poster art of the early '80s. If House of the Devil shows the same uncanny fidelity to '80s horror as its poster does, it's going to be a party and a half.
Posted by Jeff Allard at 3:43 AM

Email ThisBlogThis!Share to TwitterShare to FacebookShare to Pinterest
Labels: House of the Devil, Stuff I Want On My Wall, Ti West

Wow...I actually thought that was an '80s horror movie poster. I shall keep an eye out for this one on my On Demand.

From what I've heard, this has the look of an early 80s horror flick down to a science. I just hope it lives up to the hype. This October is looking to be pretty kick ass.

Very cool poster. But THE ROOST = "-unwatchable-"?! I didn't think it was *phenomenal*, or anything... but "unwatchable" seems a little harsh!

Thanks for the comments, guys! Judging by the reaction across the internet, it looks like the House of the Devil poster is everyone's new favorite thing!

As for The Roost being 'unwatchable' - I guess that is harsh but all I can say is that I just couldn't make it through the movie. Maybe it's just that no killer bat movie besides Nightwing (1979) can ever win me over!