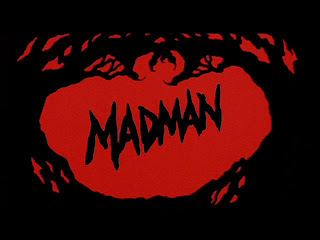 One of the most popular subsets of the slasher genre is the campground-set slasher (which, by the way, should not be considered the same as the carefree weekend in the woods-style slasher, a la Don't Go In The Woods and Just Before Dawn). The campground slasher film includes such touchstones of the genre as Friday the 13th, The Burning and the unjustly overlooked Madman (1982).

Madman doesn't get talked about much in slasher circles, with films like My Bloody Valentine, Prom Night, and Happy Birthday to Me getting most of the love when it comes to the early '80s slasher cycle. For whatever reason, the whodunnit slashers from that time all have the biggest fanbases while the rampaging cretin slashers, not so much. But Madman is one rampaging cretin slasher film that deserves a much larger cheering section than it appears to have.

Written and directed by Joe Giannone, Madman opens with a tale told in song around a campfire of the legend of "Madman Marz," a backwoods superfreak who reportedly killed his family years ago and was hanged for his crimes. But somehow he lives on and now, if his name is spoken above a whisper, he'll come looking for blood. Naturally, one of the kids around the campfire takes it upon himself to be the asshole of the night and calls out Madman Marz at the top of his lungs. And whaddya know, the legends turn out to be 100% on the money and Marz drops whatever he's doing (not housecleaning, judging by the sloppy state of his home) and spends the night killing.

That's the whole plot of Madman. It's a story so simple it makes Halloween look like an example of byzantine plotting. But yet it works so well. It's as perfect a horror movie - certainly as perfect a slasher film - as I can think of. While most of the whodunnit slashers have enjoyed a more prominent afterlife than Madman, by their nature a lot of their time is spent dealing with red herrings and keeping the mystery of the killer's identity bubbling with soap opera-ish drama meant to spread suspicion across the cast. Madman has none of that and simply has Marz on the hunt. Yes, there are scenes dealing with the various personal relationships of the camp counselors but that's only because when you've got characters in a scene together, they've got to say something to each other, right?

To be fair, the counselors here are some of the better-drawn characters of any '80s slasher in that they actually have personality traits that one would hope to find in functioning adults. They're not flighty idiots, total horndogs, or irresponsible stoners. They're a level-headed bunch (even if they wander off alone into the woods too much for their own good), serious toward their responsibilities as counselors and cool with each other (after one guy has a minor public outburst, he later makes a point of apologizing to the entire group). Naturally, a few counselors are intimate with each other but it's not presented as lewdly as in most slasher films of the time.

Gaylen Ross, from Dawn of the Dead and Creepshow, plays a counselor named Besty but she's credited under the pseudonym of "Alexis Dubin." I guess this didn't seem like as classy a project as the Romero films she had done - and, really, it isn't - but it's certainly nothing to be ashamed of.

To the untrained eye, Madman plays out like any other cheap B-movie but those who have immersed themselves in the slasher sub-genre will note and appreciate several subtle touches that differentiate Madman from the pack. As mentioned earlier, the generally more adult portrayal of the counselors is a welcome change of pace from the slasher norm. Also, this might be the only horror film to take place entirely at night (feel free to hip me to other examples if you have them, 'cause I can't think of any). Many horror films take place over the course of twelve or twenty-four hours but seldom (ever?) has there been one that doesn't spend a single second in the daylight.

Typically a film like this would begin its story in the afternoon, allowing us to get to know the characters before nightfall, then the conclusion would take us (and the sole survivor) into the breaking dawn of a new day but Madman doesn't go that route. It begins in darkness and ends in darkness. That's a detail that some might not even register, much less consider important, but I feel that it lends Madman a particular vibe.

In tandem with that sense of perpetual night is the way the film seems to loop in on itself. As the film opens, a counselor named T.P. (Tony Fish) is singing about the legend of Madman Marz and as he walks around the campfire singing his song and passes the other counselors, we're shown a brief flash forward of each counselor's future brush with Marz. Of course, it's not news that most of these characters will meet a grisly fate during the course of the film but to be shown these precognitive flashes early on casts an effective pall of doom over the film. Close to the film's end, T.P.'s song is replayed as the camera pans across all the slain bodies in Marz's basement.

In calling back to that moment from the beginning, just as the opening of the film had peered into the future, it gives the film a circular feel, as though these characters exist within a narrative loop from which they never escape. For some reason, it puts me in mind of Amicus anthologies like Tales from the Crypt in which we discover that all the characters we met in the beginning have been dead from the start. But maybe that's just me. 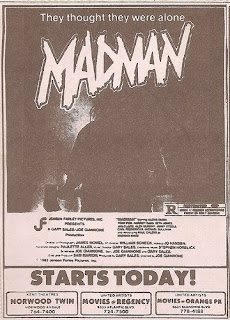 Finally, and this is major spoiler territory so skip to the next paragraph if you like (in fact, don't even finish this sentence!), but Madman stands apart from other slashers in that it allows every sympathetic character to perish (well, save for Max, the head counselor, who leaves the main action very early on). This is the only slasher I can think of that lets its Final Girl (Ross) die at the conclusion. And the way that Ross' character meets her end is one of the most upsetting in slasherdom. Even though she has a chance to escape, Betsy decides to grab a shotgun and search to see if any of the other counselors have survived. She enters Marz's backwoods home - a place every bit as hopeless and foreboding as the house Heather and Mike stumble onto at the end of The Blair Witch Project - only to be overpowered by Marz. Betsy is then dragged alive and screaming into Marz's basement where she's impaled through her chest on a hook on the wall - a cruel vantage point from which she can see the bodies of all her friends. It's a truly terrible end for a likeable and brave character and it flies in the face of slasher tradition wherein the Final Girl is always allowed to get the upper hand. She might die in the opening moments of the sequel but she at least gets to walk away victorious that one time. Betsy does score a crucial last stab in against Marz but it's a dying gesture on her part.

Some might consider the generally cheap look of Madman to be a flaw but I think it adds to the film. Yes, the make-up on Marz (Paul Ehlers) looks about on par for what you'd see at a haunted hayride attraction and the splatter FX aren't nearly as polished as what Tom Savini or other skilled make-up artists were doing at the time but I think the slightly hokey look to both Marz and the gore helps the film from being unrelievedly grim. Without turning it into strictly camp, the detectable aura of artifice is just enough to give the film the feel of an enjoyable put-on. The fakery doesn't undercut the scares - it just allows the film to play out as spooky fun, rather than as unpleasant.

Most slasher films from the early '80s look pretty tepid by today's standards - even if they're still fun from a nostalgic standpoint. But Madman, to me, is still scary. Admittedly, some viewers might be immune to it simply because the slightest hint of amateur acting or dated fashions is enough to induce kneejerk peals of ironic laughter in some audiences (by the way, I'd like to award actress Jan Claire bonus points for expressing her terror in such a way as to make Veronica Cartwright's Alien performance look like a study in stoicism) but for those able to look past such things, Madman still works like, well, a madman.

Here's a glass raised in your honor, Marz. Salut! 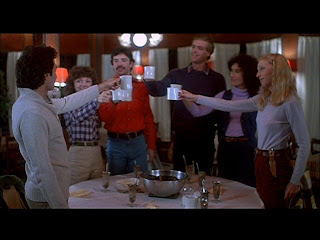 Skipped through your review and decided to just comment and say I have never watched this one and now I want to seek it out. Once I do, I will come back and leave my two cents worth! Thanks for the heads up!

My pleasure, Joe - hope you enjoy the movie!

I'm tracking this one down this weekend. Also, good to see you're posting more often. I look forward to reading new columns on here all the time. Thanks for the MADMAN heads up!

You're welcome, CB! I hope you end up liking the movie - good luck in finding it!

This was one of my first horror rentals in the early '80s, back when we didn't even have a VCR yet and had to rent the portable one from the video store along with the movies.

Three things will always stick with me about Madman:
1. The darkness of the film got on my nerves on several occasions. At times it felt like it was giving Humongous a run for its money in the murkiness department.
2. The car hood kill has to be one of the greatest ever in early '80s slasherdom.
3. The "Madman Marz" theme song. EARWORM! Ahhh, get it out of my brain!

Sounds like I have missed out on this one...I have caught up with many 80's slasher's that I had missed (like The Prowler) but this one still managed to slip by me, I need to give it a go soon, thanks for the review.