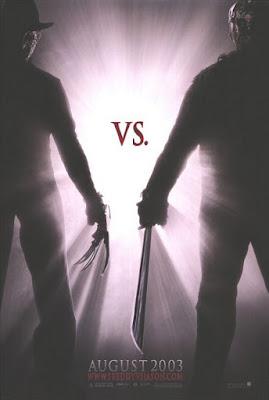 Two titans of terror coming together in one historic, long-awaited death match. Winner take all! How easy is that to sell? Even in as commercial a genre as horror, some movies still present a marketing challenge but not this one. No, once you put that vs. between Freddy and Jason, your job is essentially done. You barely even need to have a trailer.

That said, this trailer was met with a special sense of excitement:

Hard to believe that Freddy vs. Jason celebrated it's fifteenth (!) anniversary this year but when you look at the trailer, it certainly reminds you that it was from a different, distant time. First of all, it was from back in the day when New Line Cinema was still a thing. I know we still see that logo pop up here and there on new movies but it's not like it was when a movie was specifically a New Line Cinema film. That logo conjures such a sense of nostalgia for me. During the '80s and '90s, when times were sometimes lean for genre films, when I would see the New Line logo come up on the front of a trailer, I got pumped because I knew it was a good chance it'd be a horror trailer.

Either that, or a House Party sequel.

Either way I was happy!

And thank God Freddy vs. Jason came out during an era where FANGORIA was still a robust presence. It would have been a crime had this movie, a film for the Fango crowd if there ever was one, had come out with no accompanying Fango cover story to mark its arrival. 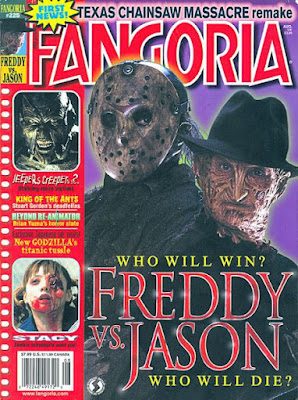 For a movie that had so many expectations to live up to, I feel like Freddy vs. Jason mostly satisfied. Mostly. But while I'm grateful that they made this before Robert Englund aged out of the Freddy role, I feel like had this been made in the late '80s, at the commercial peak of both franchises, whether the movie was good or bad it would have been - I don't know - more pure. Well, as "pure" as a shameless cash grab can be. But hey, what they came up with in the early 00's was just fine. By now, this movie has its own retro-charm going for it.

With Michael Myers killing it at the box office again, Robert Englund donning his Freddy make-up for a guest spot on The Goldbergs, and LeBron James rumored to be getting a new Friday the 13th going, you've got to wonder if another big slasher vs. might be in the cards.

Given how hard it was to make Freddy vs. Jason happen in the first place, I'm gonna guess no. Seems like a real long shot. So until the day should ever come when another movie attempts to bring two or more icons together in bloody battle, Freddy vs. Jason will continue to wear the crown as the uncontested champ of slasher throwdowns.
Posted by Jeff Allard at 10:09 AM

First time I saw this trailer on the interwebs, it was chills...and the final product didn't neccessarily disapoint. I enjoyed myself from the New Line logo to the Ill Nino end credit song. It really was, despite the flaws (and there were a few) lightning in a bottle.

I always get the feeling that some fans were let down by this movie but I feel like, all told, they did a pretty solid job. If you're a fan of both franchises, I feel like this movie does them both justice. It's not perfect by any means but I think the genuine effort to do well and not just throw something together to make a buck shows.