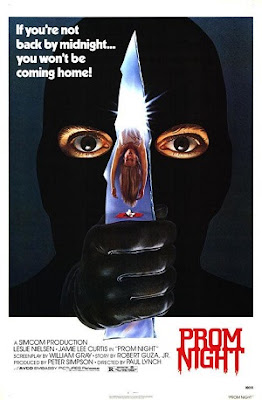 With Halloween inching ever closer, we're sticking with the Jamie Lee Curtis slasher theme here. Next up is 1980's Prom Night. The trailer for this is so great, let's not waste any time and just get to it:

If I could pick one early '80s slasher trailer as being the most emblematic of the sub-genre, it'd have to be Prom Night. That is the slasher genre's golden age, right there, encapsulated in all its cheesy glory. No kid who saw this trailer back in the day wasn't 100% sold.

Thanks to a speedy turnaround that gave Prom Night its TV premiere a scant seven months after playing theaters, when excitement for the movie was still fresh, underage kids like me who missed out on Prom Night on the big screen got to watch it in the comfort of home!

For anyone who wasn't there, let me tell you - it was a big deal! 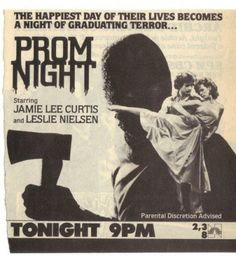 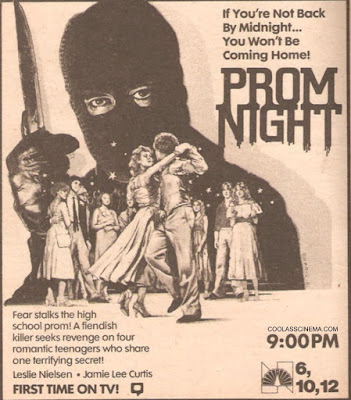 I believe it's the fact that its network TV airing put it in front of so many impressionable eyes, many of them in pre-cable, pre-VCR households at the time, that gave Prom Night such a foothold in the consciousness of Gen-X horror fans. Fans of a certain age will swear to you that it's a good movie, maybe even a horror classic, but in fact it's pretty lousy.

I've got all kinds of affection for it, sure, but it's bad. And it's such a weird Jamie Lee Curtis horror film in that her character, being the beloved sister of the killer, is never actually in any jeopardy. You'd think that Curtis should have been one of the kids whose thoughtless behavior leads to Robin Hammond's death. Ideally, she should have been the "good girl" of the group who carried remorse for her actions.

She should have been the character of Kelly that Mary Beth Rubens plays but, obviously, have her not die early on but instead survive to be the Final Girl and confront the killer in the climax. But they didn't do that so Prom Night stands as the one Jamie Lee slasher film in which she's never in any real peril, making it low on actual suspense.

Then again, I kind of think Prom Night's tepidness played in its favor to a younger audience. It was just scary enough for kids to feel like they were watching a "real" contemporary horror movie like Friday the 13th but it wasn't hardcore enough to actually traumatize them.

It was like a slasher movie version of an underhand pitch. It's a softball movie that gave a lot of young kids their earliest taste of a grittier type of horror before they were ready to graduate to the next level. Although its protagonists were high schoolers, I believe that Prom Night's greatest admirers were strictly of the less jaded junior high set. 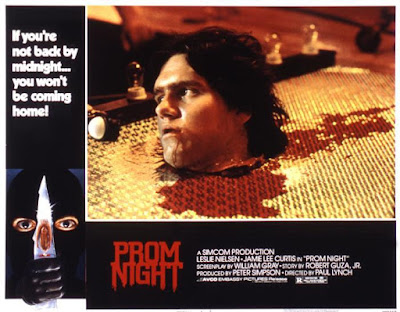 It isn't great. But it is saved by the nostalgic love it has for being what it is, when it was. Does that make sense?

You bet! I still love a lot of movies purely out of my nostalgic attachment to them.